Please join us for A Conversation with General Dunford on Monday, August 22. 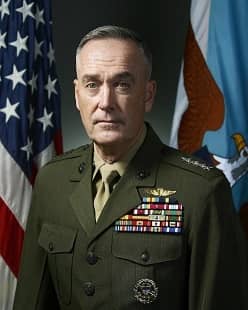 General Joseph F. Dunford Jr. served as the 19th Chairman of the Joint Chiefs of Staff, the nation’s highest-ranking military officer, and the principal military advisor to the President, Secretary of Defense, and National Security Council from Oct. 1, 2015, through Sept. 30, 2019. Prior to becoming Chairman, General Dunford served as the 36th Commandant of the Marine Corps. He previously served as the Assistant Commandant of the Marine Corps from 2010 to 2012 and was Commander, International Security Assistance Force and United States Forces-Afghanistan from February 2013 to August 2014. A native of Boston, Massachusetts, General Dunford graduated from Saint Michael's College and was commissioned in 1977. He has served as an infantry officer at all levels, to include command of 2nd Battalion, 6th Marines, and command of the 5th Marine Regiment during Operation IRAQI FREEDOM.

8:30 AM
Event begins and breakfast served

We hope you are able to join us for A Conversation with General Dunford.