Meet Our Family of Companies
Our site uses cookies to improve your visitor experience. By browsing our website, you agree to the use of cookies and agree to our privacy policy.
With the S&P 500 Index up by 380% since the bull run began in March 2009, investors are wondering what can stop it. This commentary examines the usual suspects – risk of higher interest rates and recession – as well as uncertainty about the upcoming elections.
By Nick Sargen January 9, 2020
Markets
Share:

Following a steep decline in late 2018, the U.S. stock market (along with other risk assets) rallied throughout 2019 on the back of an unexpected reversal in U.S. monetary policy and a pause in the U.S.-China trade conflict. They lessened the risk of a recession, and fueled optimism the global economy is about to improve. Consequently, both stocks and corporate bonds posted stellar returns.

The standout performer was the U.S. stock market: The S&P 500 Index generated a total return (including dividends) of 31% for its strongest annual showing since 2013. This occurred even though corporate earnings declined during the year. The market multiple has expanded to 18.2 times one year forward earnings, which is close to its high over the past two decades.

Investors are weighing how long this situation can continue. The bull-run that began in March 2009 is exceeded only by the tech bubble of the 1990s and it is unrivaled in duration since the 1920s. As of the end of 2019, the S&P 500 Index was up by 378%, far exceeding the average of 164%, and the duration of 129 months far exceeds the average of 54 months (Figure 2). The U.S. equity market, moreover, has outperformed international equities three-fold over this period.

One of the factors that has extended the bull-run is interest rates have remained unusually low. Even though the economic expansion is late-cycle and unemployment is at a 50-year low, wage increases and inflation have been moderate. This suggests that the Phillips-curve relationship between the level of unemployment and the rate of inflation has been altered partly due to increased global competition.

During the past year, the Fed made an unexpected U-turn in monetary policy. After raising the federal funds rate four times in 2018, it lowered the rate three times in 2019. This pivot was mainly a response to an ongoing slowing of the global economy and uncertainty about the fallout from the trade conflict between the U.S. and China.

More recently, Fed officials have signaled that monetary policy is on hold indefinitely.  Furthermore, they consider the 2% target inflation rate as a central tendency rather than a ceiling. This means the Fed is prepared to tolerate a temporary overshoot rather than being compelled to raise rates whenever the 2% threshold is exceeded. Therefore, we believe the prospects for a significant rise in interest rates are low this year. Meanwhile, financial market conditions have improved considerably.

Another factor bolstering equities and other risk assets was a lessening of recession fears in the latter part of 2019. Worries about a U.S. recession heightened in August, when investors became concerned that an escalation in the U.S.-China trade conflict could spawn a world-wide recession. This was accompanied by plummeting bond yields globally: The volume of government bonds with negative yields soared to $17 trillion, a three-fold increase from the beginning of the year.

U.S. Treasury yields, in turn, plunged by 50 basis points in August, and the yield curve inverted somewhat, adding to worries. More recently, yields have reversed most of this decline. The Treasury yield curve is positively-sloped now, which has encouraged investors about the economy’s prospects.

The most likely outcome is the U.S. economy will continue to expand at about 2%, which is the pace it has been running at over the past five quarters. Consumer spending, which accounts for nearly 70% of aggregate demand, has been expanding at a rate of 2.5%, supported by favorable labor market conditions. And housing demand has been bolstered by a decline in mortgage rates.

The main area of softness on the demand side is business investment spending, which has stalled since the onset of the trade conflict with China. On the supply side the manufacturing sector is feeling the brunt, with the Purchasing Managers’ Index having declined for the past five months to the lowest level since mid-2009.

With the phase-one trade agreement reached in December, the main threat hanging over the global economy has diminished. Since the onset of the trade dispute in early 2018, global economic growth has slowed by a full percentage point to 3 percent, the weakest pace since the expansion began in 2009.

The latest readings suggest that the world economy may be stabilizing, and some forecasters are calling for an improvement in the coming year. However, our take is it is too early to be confident, as there are lagged effects from earlier tariff hikes and growth of world trade volume is still depressed (Figure 3). 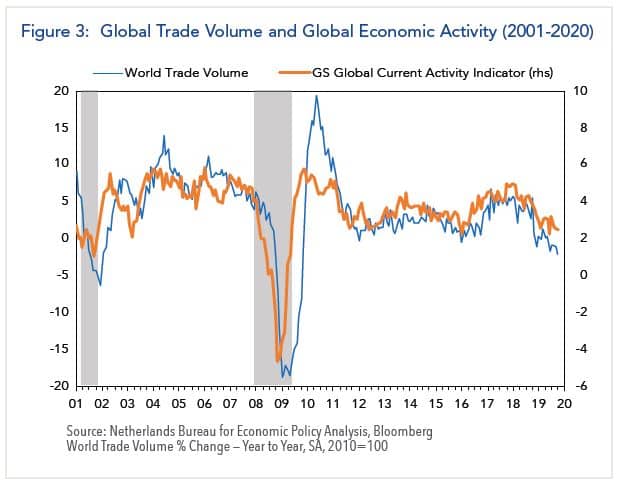 U.S.-China Trade: Round Two Will Be More Challenging

While global equity markets rallied in the latter part of 2019 in anticipation of a trade deal between the U.S. and China, the trade dispute is far from over. One reason is that the U.S. could re-impose duties if China is deemed to not have adhered to the agreement.


A second reason is the easiest part of the trade dispute is over. The hard part is about to begin that will cover long-standing issues relating to intellectual property violations, forced technology transfer and subsidization of Chinese industries. The tactics the U.S. government pursues to prod China on these issues will likely entail less reliance on tariffs and greater reliance on legal and regulatory enforcement mechanisms that Congress and the White House have put into effect over the past two years.

The most difficult issue to resolve relates to Chinese government subsidies of state-controlled businesses. It remains to be seen whether China will make concessions on this issue. However, the most likely outcome is they will be very limited, because President Xi Jinping has been active in re-instating the state’s role in the economy for political reasons.

Investors, therefore, must be prepared for the possibility that an impasse will be reached; if so, they will have to determine how markets will react.

The outcome will be dictated by how President Trump responds. It seems unlikely he will want to escalate the trade war as he did in late 2018 and again this past summer with the U.S. elections approaching. Consequently, a more measured response is likely – one that will not cause financial markets to erupt.

The main wild card at this juncture is the impact the U.S. elections will have on financial markets. Following Donald Trump’s surprise victory in November of 2016, the stock market took off, and as of end 2019, it had risen by 60%.

Over this period, the impact of tax cuts, monetary policy and trade disputes on the stock market is evident from the pattern of stock market moves. Most of the market’s rise occurred in the first year of Trump’s presidency, when investors reacted favorably to pending cuts in corporate and personal tax rates. Thereafter, the stock market trended sideways with heightened volatility amid uncertainty about interest rates and trade policy. It then staged a powerful rally in the fourth quarter of 2019, when the trade clouds began to lift.

By comparison, political developments have had little impact on financial markets. Markets have not responded to the impeachment proceedings, mainly because investors do not expect Trump to be removed from office by the Republican-controlled Senate. Nor have they focused on the presidential election, because the process is still early and there is uncertainty about whom the Democrats will nominate.

However, investors will likely pay greater attention to political developments once the Democratic nominee is known. The potential impact is greatest if the nominee is from the progressive wing that favors tax increases and greater government involvement in the economy. Even then, much will hinge on the outcome of congressional elections and whether one party controls both houses.

In the meantime, geo-political risks and heightened tensions between the U.S. and Iran could boost market volatility, especially if oil prices surge.

Weighing these considerations, we are maintaining our investment strategy that moderately over-weights credit risk in fixed-income portfolios and emphasizes high-quality franchise names in equity portfolios. While we do not foresee an imminent end to the bull market in equities or rising bond yields, market returns are likely to be sub-par in the coming year considering that equity valuations are stretched, corporate profit growth has stalled and the outlook for the U.S. elections is uncertain.