Most developed markets today are hamstrung by weak demographics. Slowing labor force growth impinges on economic growth and the aging baby boom generation will put a growing burden on government budgets given entitlement obligations. Equity valuations are high in the U.S., as are margins and earnings growth expectations. We believe that U.S. investors can benefit by adopting an active management point of view when it comes to how they construct their portfolios and in the case of Emerging Markets, diversifying in those markets where the demographic backdrop is accommodative to growth, valuations are reasonable (if not cheap) and relative earnings growth looks attractive. To reduce the potential volatility that accompanies Emerging Markets we suggest that investors avoid the more cyclical commodity industries and Financials sectors and focus on those sectors and companies that we believe will benefit from the burgeoning global middle class.

A Longer Term Perspective on the Emerging Markets Landscape

Over the last two decades, the emerging markets story has been primarily wrapped around China and its unprecedented growth. China built a strong export-oriented manufacturing base and relocated some 400 million rural Chinese farm laborers into cities. In 1990, China’s urban population represented just 25 percent of the total population; today it represents about 55 percent. Epitomizing the rapid growth seen in China, in just a three-year span more cement was poured in China (between 2011 and 2013) than was poured in the U.S. during the entire 20th century. The size, rapidity, and magnitude of China’s industrialization and urbanization cannot be overstated. This massive building boom in China became the emerging market story. Across the world, resource capacity was built and funded by the financial sector to serve this seemingly insatiable appetite for building materials. But now China has shifted its focus and embarked on a slow transition to a more inwardly focused economy that emphasizes service and consumption rather than industry and construction. This transition threw the Emerging Markets into disarray, leaving many countries and companies with too much debt and resource capacity to serve China’s old growth model. Commodity prices peaked in 2011 and continued to fall through the end of 2015 taking Emerging Market equity prices down with them.

Now let's look at the other side. China has made tremendous progress in its economic transition. Exports now represent less than 20 percent of China’s gross domestic product (GDP), compared to 37 percent in 2006. More importantly, the key to the Emerging Markets story going forward is that China is no longer a low-cost producer. Manufacturing wages in China are higher than all Latin American countries with the exception of Chile and higher than all of the Emerging Market countries in Asia. Higher wages mean more disposable income for the Chinese, but it is also benefiting other Emerging Markets. Labor intensive manufacturing is moving out of China and into other Emerging Markets. China’s success is now flowing outward to other Emerging Markets, bringing jobs and moving a new population into the middle class. Emerging Market countries already represent a large portion of the world’s labor force and are projected to become even larger. Emerging Markets represent 90 percent of the global population aged under 30. With jobs comes income and this income is moving millions of people out of poverty. The Brookings Institution estimates that 150 million people are now moving into the middle class every year, and that number is growing.

Further, Brookings estimates that global middle-class spending will increase by over $20 trillion in the next decade through 2030, with approximately 80 percent of that coming from Asian Emerging Markets1.

It is important to note that this population and middle class Emerging Markets growth story is not uniform. Both South Korea and Russia have aging populations much like the developed world. There are also countries that have structural and regulatory hurdles that impede middle class growth (e.g. Turkey and Greece). 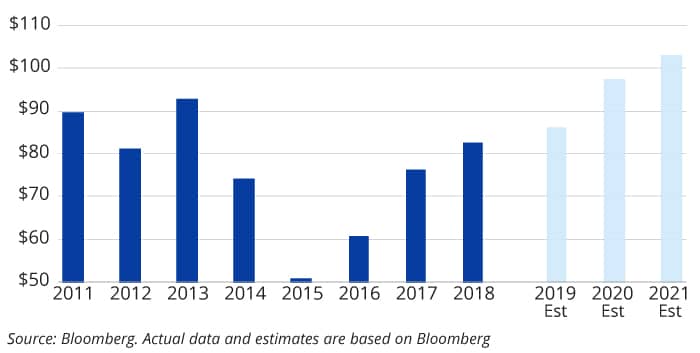 How to Navigate Emerging Markets

We believe the MSCI Emerging Markets Index is a poor representation of the underlying middle-class consumer drivers discussed in this paper. The Index still has strong representation from the highly cyclical commodity and Financial Sectors (representing 40 percent of the EM Index), however, these sectors are less influenced by middle class growth. U.S. investors that adopt an active management point of view when it comes to how they construct their portfolios could benefit by considering sectors and industries that are more directly influenced by the burgeoning middle class which we believe will provide higher and more sustainable growth.

The S&P 500 Index is a group of 500 widely held stocks and is commonly regarded to be representative of the large capitalization stock universe.

The MSCI Emerging Markets Index is a free float-adjusted market capitalization index that is designed to measure equity market performance of emerging markets.

The indexes mentioned are unmanaged statistical composites of stock market or bond market performance. Investing in an index is not possible. Unmanaged index returns do not reflect any fees, expenses or sales charges.

Performance data quoted represents past performance, which is no guarantee of future results.

Investing in Equities, including International, Emerging and Frontier Market equities are subject to market volatility and loss. They also carry the associated risks of economic and political instability, market liquidity, currency volatility and differences in accounting standards. The risks associated with investing in international markets are magnified in emerging markets and frontier markets.