Meet Our Family of Companies
Our site uses cookies to improve your visitor experience. By browsing our website, you agree to the use of cookies and agree to our privacy policy.
Much like an iceberg, a great deal lies beneath the surface of the MSCI EM Index. By exposing the hidden layers, we can better understand what has happened in Emerging Markets over time, and better judge prospects going forward. We’ve identified five such contributors that help explain the relative underperformance of the MSCI EM Index.
December 9, 2021
International Equities
Share:

It is difficult to discuss emerging markets (EM) as if they are some homogeneous entity. There are many moving parts; some moving up and others down. Our analysis has found that, over the last 12 years, significant downward pressure on the more commodity exposed portions of the MSCI Emerging Markets Index (MSCI EM Index), has masked growth in other portions. Change will always be a constant for EM, but we believe that the magnitude of downward pressure is likely to slow over the next decade. This in turn should allow the overall Index to outperform. It doesn’t hurt that the Index has a much lower valuation and higher dividend yield than the S&P 500®.

How many times have you heard someone justify owning EM due to younger demographics, middle class growth and expected faster GDP growth potential? We’ve said it ourselves. Relative performance for the MSCI EM Index peaked versus that of the S&P 500® in 2010 and has significantly underperformed since. Yet looking at GDP growth from 2010 on, EM countries dramatically outperformed Developed Markets (DM) countries. And this GDP growth has led to significant growth in the middle class and consumer spending. Theoretically, analysts expect this more rapid economic growth to translate to higher earnings growth for the MSCI EM Index as well as outperformance of the EM stocks. 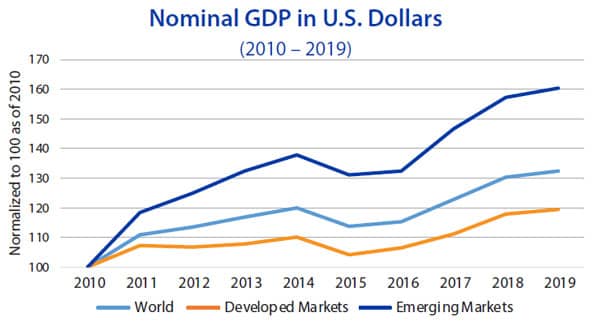 A chart of earnings and price performance appears to suggest that demographics, economic growth and middle class growth do not influence earnings. Over this same period, S&P 500® earnings have doubled. It is no wonder the MSCI EM Index has underperformed. Our work suggests that a combination of factors related to the MSCI EM Index – both fundamental and otherwise – can explain much of this underperformance. Importantly, it seems these factors are unlikely to persist in the same fashion going forward.

A Look Below the Surface

Much like an iceberg, a great deal lies beneath the surface of the MSCI EM Index. By exposing the hidden layers, we can better understand what has happened and better judge whether to invest in EM going forward. We’ve identified five such contributors that help explain the relative underperformance of the MSCI EM Index. 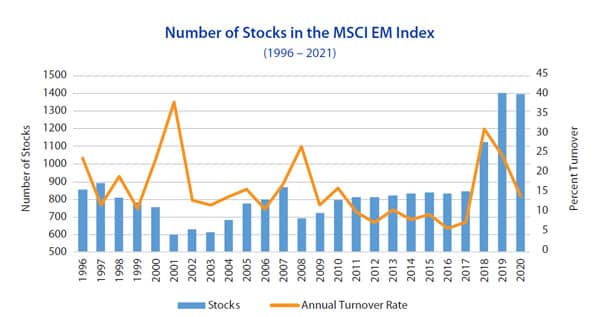 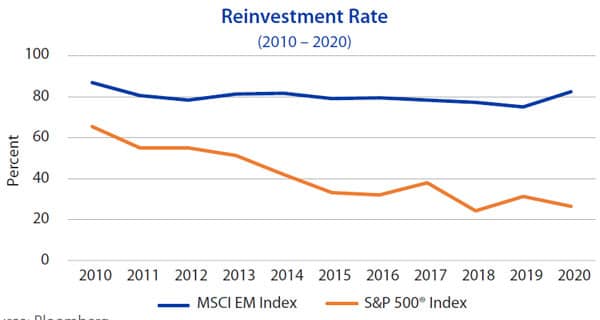 Reasons to Keep EM on Your Radar

MSCI’s decision to integrate China A shares into the MSCI EM Index did have a negative near-term impact in terms of composition and performance. However, we don’t foresee further A share integration given how much MSCI has done already, and because the deteriorating U.S./China relationship may influence MSCI’s decision-making (MSCI is an American company). EM share issuance is likely to continue to be an earnings headwind, as it is a natural by-product of investing in companies in developing countries. While geographic and compositional changes are to be expected, we doubt they will match the magnitude seen over the last 12 years, nor pose the same headwinds. Earnings for commodity producers are highly correlated with commodity prices, which have been in a secular bear market since 2010. China has been at the center of much of this as it shifted from spending on infrastructure and manufacturing towards a consumption-based economy. We believe this shift will continue, though the pace has slowed and markets have adjusted to a lower rate of infrastructure spending. Lastly the forward P/E gap between the S&P 500® and the MSCI EM Index is the widest in history. As such, we do not see that as a headwind going forward, and believe it could turn into a tailwind.

We do think that the economic growth potential for EM continues to be much better than for DM, in part because of demographics and middle class growth. We also believe that this economic growth (along with better relative valuations) will help EM outperform DM. That said, we believe that, much the same as for the last 10 years, the true opportunities lie inside of the MSCI EM Index.

As an example, seemingly one of the biggest growth opportunities for EM relates to the smartphone. It is not the smartphone itself, but all the applications and industries that are proliferating from it. Just think about when the automobile flourished and all the industries it created that didn’t exist prior – from highways to gas stations, fast food chains, housing (suburbs), billboards, motels and many more businesses not directly associated with making cars. The smartphone is having a similar impact and it remains an underpenetrated market in EM. The accompanying chart creates perspective on not just the penetration, but also the sheer size of the EM. Another factor when considering this chart is that a user is not an owner. It is not unusual for a whole family in an EM to share one smartphone, but each family member will still be counted as a separate user. As such, these rates likely overstate the true level of market penetration.