Meet Our Family of Companies
Our site uses cookies to improve your visitor experience. By browsing our website, you agree to the use of cookies and agree to our privacy policy.
How might a change in the White House impact investors? Prevailing conditions, rather than party affiliation and campaign platforms, may offer greater insight into what a Biden presidency may portend for the markets.
By Richard "Crit" Thomas, CFA, CAIA September 16, 2020
In the News Economy & Markets
Share:

What a Biden Presidency Might Mean for the Markets

I first want to point out that one should take political pieces such as this with a grain of salt, and for a number of reasons. First, the election will be difficult to call. As the last election taught us, polls can be deceiving. Second, not only the presidency is being contested, House and Senate elections can be just as important and just as difficult to call. Third, many platform initiatives never make it into law. Lastly, and most importantly, while legislative changes and executive orders can influence the equity markets in the short-term, policies generally take a back seat to other earnings drivers in the long run.

In the 1992 election, for example, it was widely believed by market pundits that a win by Bill Clinton would be very negative for the equity markets based on his policy platform. Yet during the Clinton administration, the S&P 500 Index saw its best run under any president (before or since). The second best stock market returns occurred during the administration of former President Barack Obama. Does that mean that Democrats are better for the market? History would say yes, but I would say that while there is correlation, it lacks causation. Both won office right at the end of a recession when valuations were lower. That timing likely mattered much more for the market than any party affiliation or actions made by their administrations.

Another factor to consider today is the difficulty in passing legislation in this polarized political environment. This is not a knock on the current administration, only to serve as an example. Before the 2016 election, then-candidate Donald Trump laid out 28 objectives he sought to accomplish in his first 100 days. By the hundredth day he accomplished only nine, most through executive order. This was despite Republican control of both the House and Senate. Of the 28 goals, 10 required legislative acts. In his first two years, while Republicans controlled the legislative branch, he achieved two of those 10, and the final bills only loosely resembled the initial proposals.

Still it is important to understand what a Biden presidency could mean for the markets. The focus is on Biden both because President Trump is already a (relatively) known quantity for the markets and because he has been relatively silent about his plans for the next four years, leaving little to analyze. What a Biden presidency will look like will likely depend on whether the Democrats win a Senate majority and are willing to end the filibuster. While the demise of the filibuster has of late drawn more serious discussion among Democrats, it remains unclear if they would fully follow through. More likely, they will add guidelines around the filibuster, such as requiring that those filibustering be present on the floor and possibly considering the imposition of time limits.

A Look at Biden’s Agenda

This is the platform element that most concerns investors as candidate Biden’s plan includes raising the corporate tax rate from 21% to 28% and creating a 15% corporate tax floor along the lines of an Alternative Minimum Tax. His plans also include a higher tax bracket for high income earners as well as eliminating preferential treatment of capital gains and dividends for those same filers. While higher taxes are not market friendly proposals in the near-term, it is worth considering the longer-term effects. The accompanying chart tracks changes to the corporate tax rate and earnings per share for the S&P Composite Index. Earnings are displayed using a logarithmic (log) scale as well as a trend line. While there have certainly been significant changes to corporate tax rates in the past, it is hard to discern a connection with longer-term earnings.

Why would this be? In Jurassic Park, Dr. Ian Malcolm responds to a scientist explaining how they control dinosaur breeding, saying “life finds a way.” Possibly in the face of changing tax regimes, accountants find a way. Or possibly the higher taxes were passed on to the end buyer. There could be a number of reasons, but the point is that history suggests that a change in the corporate tax rate may not have as big of an impact on the bottom line as many believe. At least not as big an impact in the long-term. 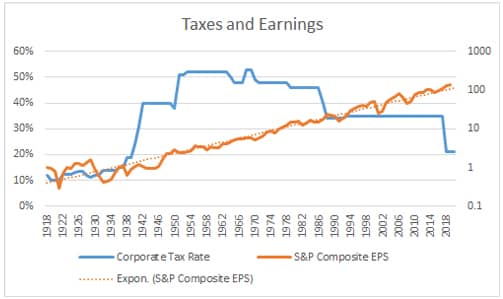 It should come as no surprise that the former vice president’s agenda includes a number of social reforms that would increase the size of the government. Higher taxes would be needed to fund these proposals, therefore, an inability to raise taxes could otherwise thwart a good portion of his agenda. In broad strokes, his stated social reforms include Affordable Care Act enhancements, a higher minimum wage, free college for many, low income housing initiatives, funding for rural broadband, an infrastructure bill with a green bias and expanding the K-12 education budget. Most all of these initiatives would require new laws, which would likely face an uphill battle. Also, it is important to note that, as with corporate taxes, historically there has been no relationship between changes in government spending and the long-term trend in corporate earnings.

Thinking along the lines of what other policies the Democratic nominee is considering that could move the markets, the first is related to unions. He is a strong supporter of the PRO Act, which was passed by the House earlier this year. Its enactment would provide a noteworthy boost to labor powers, something that has been waning for decades and likely helped corporate profits. This is definitely something to watch, but apparently a number of Democratic senators have spoken out against it, making passage unlikely even if the Democratic caucus controls the Senate.

Climate change initiatives may well put a damper on fossil fuel industries, however, most of the companies in these industries have already been hit hard and represent a small portion of the S&P 500. There are fears that a Democratic administration would be detrimental for the banking sector due to re-regulation and for the technology sector due to antitrust initiatives, though neither appears to be on the front burner of the Biden campaign. Cabinet positions may prove important as to whether either of these initiatives gains steam.

On the margin, I believe that a Biden administration would be less market-friendly than President Trump’s, but I don’t see that as cause for significant changes to an investment portfolio. The head of Biden’s transition team, Ted Kaufman, bluntly stated that “when we get in, the pantry is going to be bare.” High and rising deficits on top of a large amount of debt will most certainly complicate the legislative process. Also note that the Democratic Party itself is not unified as strong divisions exist between its progressive and moderate wings. As a President Biden (if elected) will have his hands full managing the COVID recovery, his ability to push through meaningful (market moving) legislation on top of that seems a stretch.

How Will We Pay for All This Stimulus?

Will All This Fiscal Stimulus Eventually Stoke Inflation?

A Holistic Approach to Investing in Mid-Cap Companies