Meet Our Family of Companies
Our site uses cookies to improve your visitor experience. By browsing our website, you agree to the use of cookies and agree to our privacy policy.
Equity markets have bounced back from the initial impact of the COVID-19 pandemic in the first quarter of 2020. Market recovery continues to date due to action from the Federal Reserve and Congress. Now, the focus moves to valuation and, in particular, if equity markets are overvalued.
By Thomas L. Finn, CFA March 26, 2021
Wealth Management
Share:

U.S. equity markets have undergone a historic rally after having fallen victim to the COVID-19 pandemic in the first quarter of 2020. While the wounds of 2008 – 2010 were still fresh in people’s minds, the move down as a result of the pandemic brought back the worst of memories. Following swift action from both the Federal Reserve and Congress, the market recovery began and has continued into the early stages of 2021.

The focus can now move to valuation. In particular, we must ask—are the equity markets overvalued? Depending upon the statistic (price to earnings, CAPE, price to book, price to sales, “intrinsic value,” “fair value,” or earnings yield), one can argue that some segments of the equity market are undervalued, some are at fair value, and some are overvalued. Perhaps surprisingly, in our view, the equity markets do not appear to be significantly overvalued when viewed holistically.

For those who believe that equity markets are overvalued, there is considerable risk in selling out of equities too early and missing positive returns. Two recent examples illustrate the challenge of making decisions based on valuation alone: 1) in July 1995, many began to sound the alarm that equities were historically expensive, yet the S&P 500 gained an additional 194% until March 2000; 2) Similarly, equities appeared overvalued in December 2016 and then rallied 61% until February 19, 2020, before the pandemic began to hurt U.S. equities.

A Brief History of Bull and Bear Markets 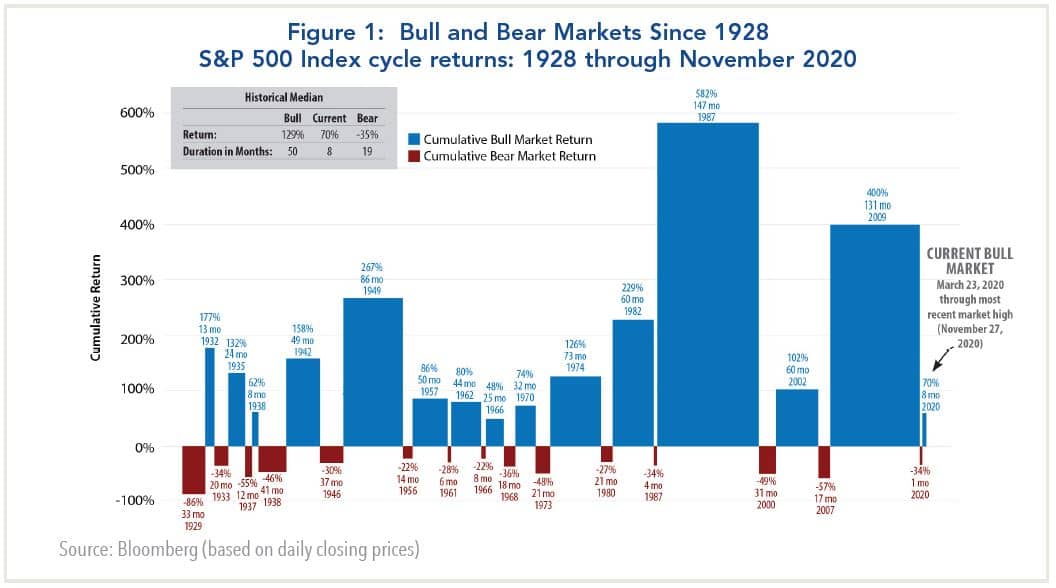 We believe several factors have led to this change in market behavior. Prior to 1980, the economy was heavily focused on manufacturing, and much of the manufacturing workforce was unionized. In addition, marginal tax rates were quite high, and the economy had dealt with bouts of both deflation and inflation and was recovering from the worst bout of inflation in history, which occurred during the 1970s. Company earnings and the market were both cyclical in nature. The information revolution was just getting started, which resulted in companies that are both more profitable and—from an earnings perspective—more stable. This, coupled with lower inflation and lower interest rates, has led to higher valuations. We believe to a large extent these higher valuations are justified.
As the United States moved from being primarily a manufacturing-based economy to more of a service-based economy, U.S. companies became more profitable, and those profits became more stable and predictable. The cyclicality of manufacturing was replaced by what at times has been called, “The great moderation.” The economy became less cyclical, earnings became more persistent, and stock prices went up. The result has been two bull markets that, in size, dwarf any preceding bull market since 1929.
The changes in the U.S. economy and U.S. corporations have impacted market behavior. Bear markets are generally no longer caused by traditional cyclical factors but are caused by other factors such as over-valuation, credit issues (crisis), or exogenous events (pandemics). The last three bear markets—the technology bubble, the mortgage crisis, and the COVID-19 pandemic—are evidence of events that disrupt bull markets. These types of events are what worry us most.
Past Downturns and Implications
We understand that the scars from the past three bear markets are still fresh in many of our clients’ minds. After all, since the end of WWII, the S&P 500 has experienced 13 bear markets where the Index has fallen 20% or more from peak to trough. Three of the worst four instances are the aforementioned dot-com bubble beginning in March 2000 (S&P 500 total returns of -47% over 31 months), the Great Financial Crisis (S&P 500 total return of -55% over 17 months), and the COVID-19 pandemic that erased 34% from the S&P 500 in a little over a month.
Figure 2 shows the S&P 500 intra-year declines along with the annual returns for the index. The after effects of the technology (valuation) bubble lasted 3 years while the housing crisis, which lasted only a year, was the most severe. The market recovered its losses from the COVID-19 pandemic in historic fashion with the S&P 500 down 34% early in 2020 only to finish the year up 18.4%. As evidenced in Figure 3, the economy contracted by over 10% in early 2020. Timely action by the Federal Reserve along with added fiscal stimulus, however, created an environment in which many businesses survived, and in some cases, thrived. The adoption of new technologies (e.g., Zoom), helped companies post better earnings than initially expected in such a difficult year. 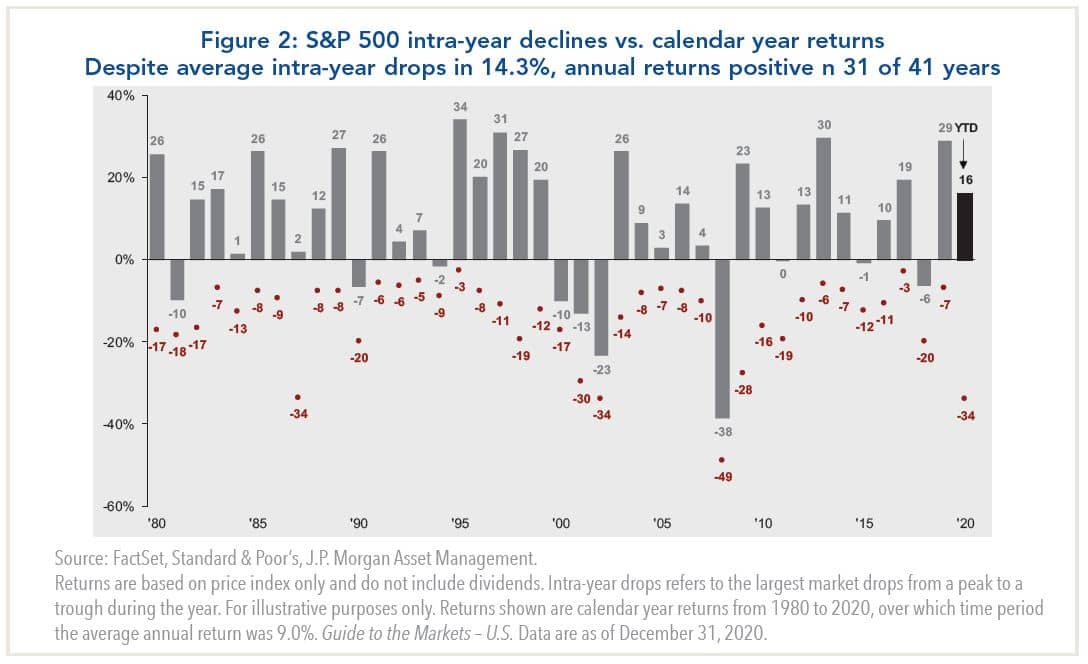 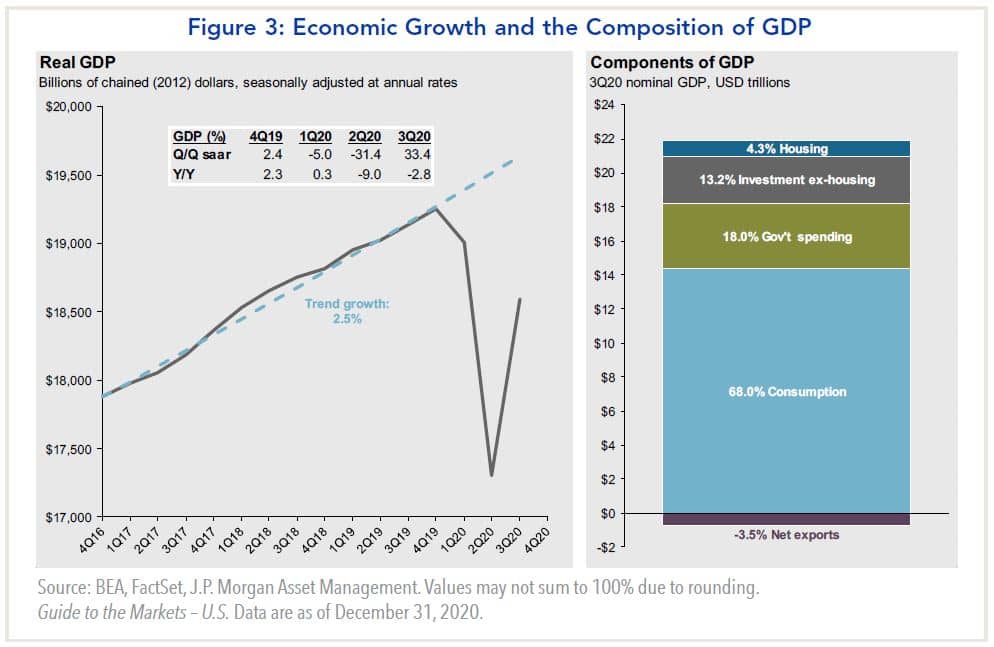 S&P 500 earnings declined, from slightly above $160 in 2019 to an estimated $138 in 2020, but investors, impressed that the earnings decline wasn’t greater, looked past 2020 earnings to view the pandemic as a short-term event that will be resolved in 2021. Earnings are expected to improve significantly in 2021 and in 2022. The market has responded and continues to perform quite well.
But, shouldn’t we worry about valuation? And what about potential tax hikes? We believe that market timing based on political events is not fruitful, and we offer the chart showing the growth of $10,000 over previous presidential administrations as a guide (Figure 4). Since 1937, the trend of the market has been up despite which political party has been in control of the White House or Congress. As is always the case in equity investing, it is less about timing the market and more about time in the market. We believe that for those with a long time horizon, equity investing is most rewarding. Trying to handicap the effects of a given political environment is not an endeavor we recommend. Valuation, while very important when selecting individual stocks, should not be used in an attempt to time the market (see chart titled “P/E Ratios and Equity Returns,” Figure 5). Subsequent one year forward returns for a given P/E ratio can vary substantially. 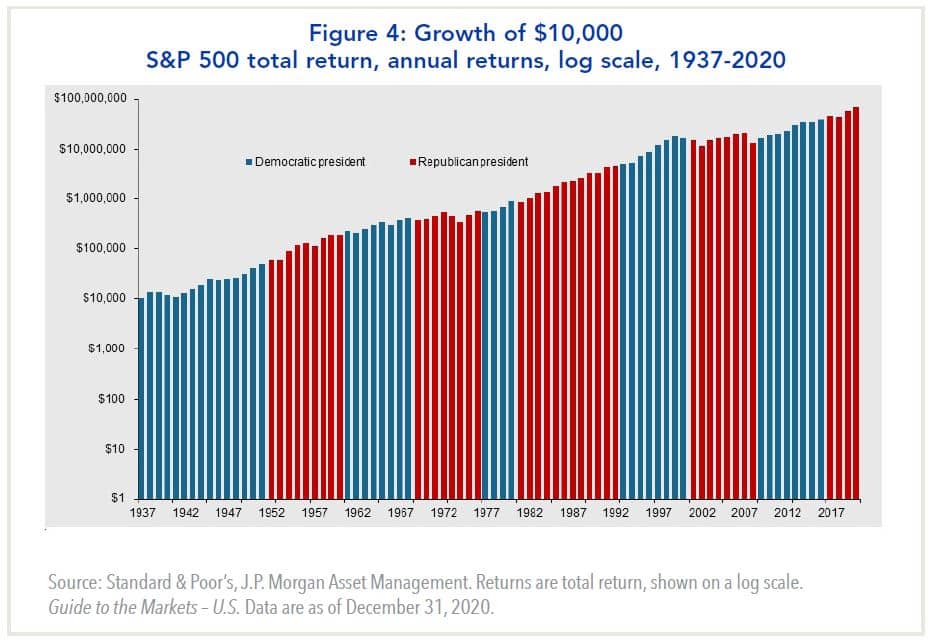 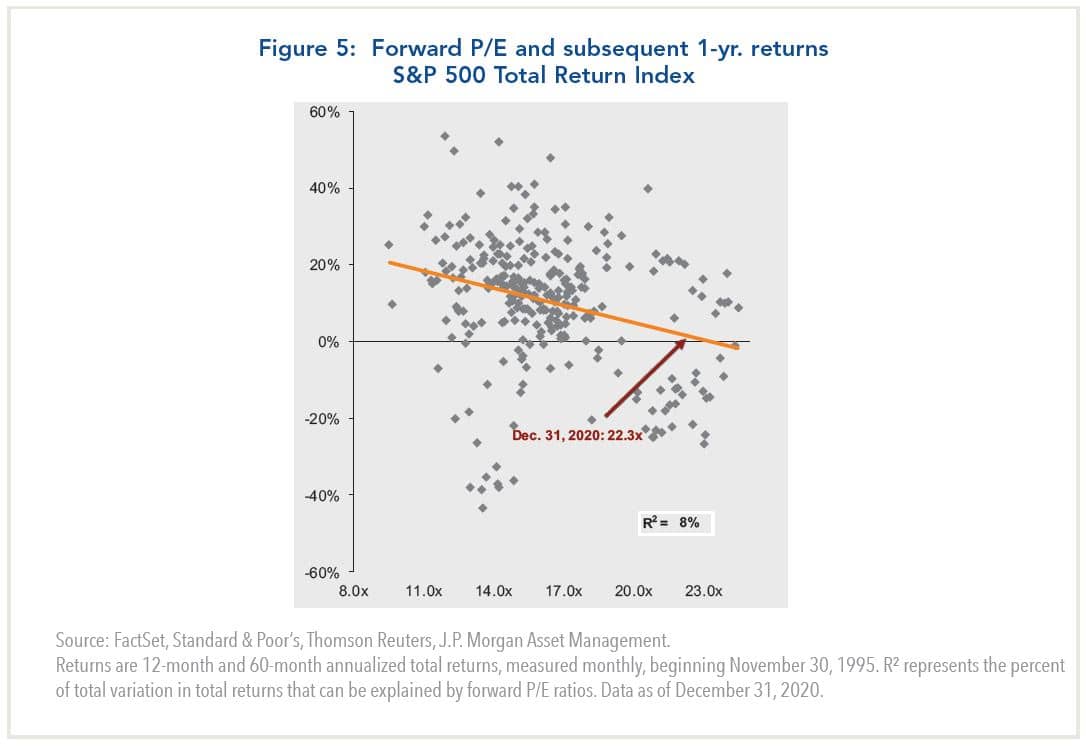 So, where do we currently stand? Given the resiliency of many companies to navigate through the pandemic, coupled with the stimulus provided by the government both fiscally and monetarily, we believe a modest overweight to equities is justified. Our overweight position is in smaller and mid-cap companies as we believe they are the most poised for a rebound once vaccines are fully administered. Within fixed income, we are overweight high yield and emerging market debt and underweight U.S. Treasuries. As the economy strengthens with the vaccine rollout, interest rates may rise slightly, reducing the returns of U.S. Treasuries, but we believe the better economic conditions will result in tighter high yield spreads offsetting the impact of higher rates.
In summary, it is our belief that political changes are not generally market moving, the economy should strengthen with wider distribution of the COVID vaccine, and corporate earnings should continue to rise. We will keep a watchful eye on policies coming from the new administration (especially tax policies) and will continue to be mindful of the pandemic, but as it stands today, we are confident in the prospects for the equity market. 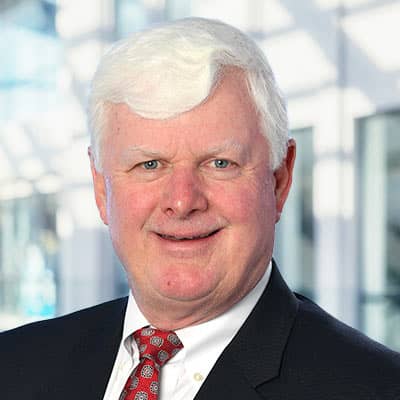 Dialing Back the Downside

The Calculus of Saving for College