Meet Our Family of Companies
Our site uses cookies to improve your visitor experience. By browsing our website, you agree to the use of cookies and agree to our privacy policy.
Theresa May’s decision to call an early election as Prime Minister has come back to haunt her: Labor Party leader Jeremy Corbyn mounted a credible campaign that denied the Conservative Party a parliamentary majority.
Nick Sargen June 21, 2017
Markets
Share:

For the second time in twelve months, the electorate in the UK has defied the pollsters, this time by denying Prime Minister Theresa May and the Conservatives a clear parliamentary majority in the British elections. When May called for an early election two months ago, the initial assessment of pollsters was the outcome would cement the Tory Party’s majority in parliament, thereby strengthening her hand in negotiating Britain’s departure from the EU.

Instead, the opposite happened. The opposition Labor Party, led by Jeremy Corbyn, a staunch left-winger, mounted a credible campaign that attracted younger voters who had abstained from voting on the referendum to leave the EU. As a result, May is now scrambling to see if the Conservatives can form a coalition government with a splinter party that represents North Ireland.

Investors are now focused on what the change in political fortunes means for Britain’s exit from the EU. If May and the Conservatives had won decisively, investors were expecting a so-called “hard exit,” in which the UK would sacrifice free trade arrangements with the EU for increased national sovereignty. Now that the Conservative’s hand has been weakened, other political parties are insisting on participating in the negotiations with the EU, and the outcome could be a “soft exit,” meaning Britain would seek trade and financial concessions from the EU while surrendering some sovereignty to obtain them.

Beyond this is another looming issue — namely, how will the UK be governed when it is deeply divided as a nation? According to The Economist, Britain’s main political parties appear polar opposite in many respects: “Jeremy Corbyn has taken Labour to the loony left, proposing the heaviest tax burden since the Second World War. The Conservative Prime Minister, Theresa May, promises a hard exit from the EU. The Liberal Democrats would prefer a soft version, or even reverse it.”1 Yet, The Economist goes on to observe that the Tory and Labour leaders, despite differences in style and core beliefs, have one thing in common: “Both Mrs. May and Mr. Corbyn would each in their own way step back from the ideas that made Britain prosper — its free markets, open borders and internationalism.”2

Since the Brexit vote one year ago, the UK economy has held up better than many observers expected, as a 13% - 14% depreciation of sterling versus the dollar and euro have helped cushion the blow on exporters. However, the latest indications are the economy is slowing, as real wages have stagnated and public funding is stretched. As a result, investors are becoming nervous about the country’s future.

Meanwhile the political picture in France continues to improve, as President Macron’s newly-formed political party En Marche scored a decisive win in the French parliamentary elections on Sunday. With Macron’s party gaining a clear majority in parliament, the 39-year old president is in strong position to enact his pro-reform agenda that includes weakening France’s protective labor laws, changing tax laws, and reducing pension benefits for some workers. Moreover, whereas a year ago France appeared to be swept up in an anti-European, anti-immigrant wave, the nation has now rallied around a centrist and unabashed globalist, who seeks to strengthen the EU.

The key challenge Macron faces is whether he can make headway in reducing France’s high unemployment rate, which stands at 9.6% — the lowest in five years. For decades French politicians have tried to reform France’s antiquated system, which makes it prohibitively expensive to fire employees, only to back away in response to public protests. While only 8% of French workers belong to a union, 98% are covered by national and industry-wide contracts negotiated by unions.3 This arrangement is particularly problematic for smaller businesses that cannot negotiate terms on their behalf.

Macron is attempting to rectify the situation by making it easier to fire employees, capping damages in unfair dismissal cases and decentralizing collective bargaining. At the same time, he plans to expand worker protections by making those who voluntarily quit their jobs eligible for unemployment benefits. Macron’s goal of transforming France’s labor laws by the end of summer is considered ambiguous, and it remains to be seen how he will stand up to tumultuous strikes and protests. That said, this appears to be the best chance to reform the system in decades. Should Macron persevere, France hopefully would see the benefits of declining unemployment, much as Germany did when it enacted its labor reforms during the past decade. Note: Germany’s unemployment rate currently is 3.9%, well below other EU members.

Weighing these considerations, we continue to favor European equities, as political risks in EU have diminished while economic performance has improved. (Time to Consider Europe, May 23, 2017) That said, we would underweight UK equities on grounds the political situation has deteriorated and there is considerable uncertainty surrounding Britain’s exit from the EU. 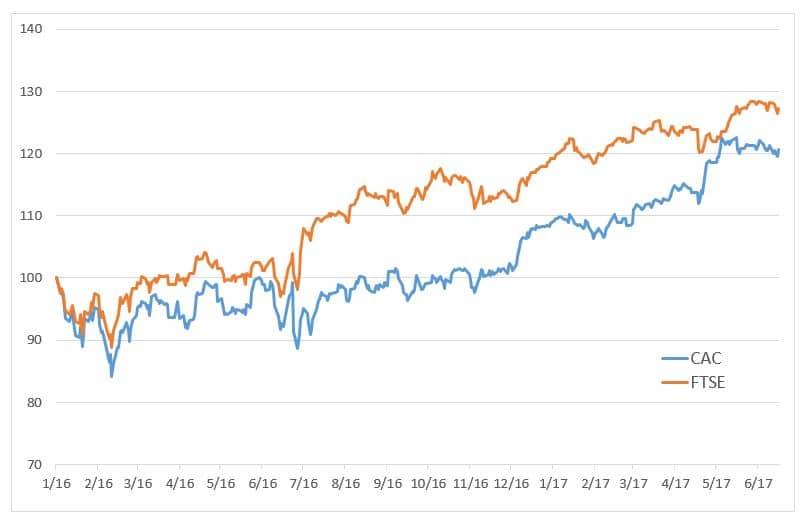