Meet Our Family of Companies
Our site uses cookies to improve your visitor experience. By browsing our website, you agree to the use of cookies and agree to our privacy policy.
U.S. and overseas markets have rallied since the beginning of this year, as investors anticipate moderate U.S. growth and low inflation.
Nick Sargen April 12, 2019
Markets
Share:

In our previous commentary titled Conflicting Market Signals: Which View Is Correct?, we noted that stock markets and bond markets were sending conflicting signals about the prospects for the global economy. This pattern persisted into March, as well.  During the first quarter, U.S. equity markets rebounded from a steep decline in the fourth quarter, with the S&P 500 Index posting a gain of 13.6% (Figure 1). Meanwhile, U.S. Treasury bond yields plummeted to their lowest level since early 2018 and the treasury yield curve inverted briefly, which fueled talk about whether it heralded a possible recession.

A widely held view is that the global slowdown is linked to a prior tightening of monetary policies in China and the U.S., as well as to an escalation in the U.S.-China trade conflict last year.  Evidence of a slowdown is most apparent in surveys for manufacturing, whereas surveys for service sectors in the respective regions have held up better.  The weakness in global manufacturing, in turn, is linked to a decline in the growth of world trade volume (exports and imports) that became apparent late last year, and which continued into the first quarter of this year (Figure 2). 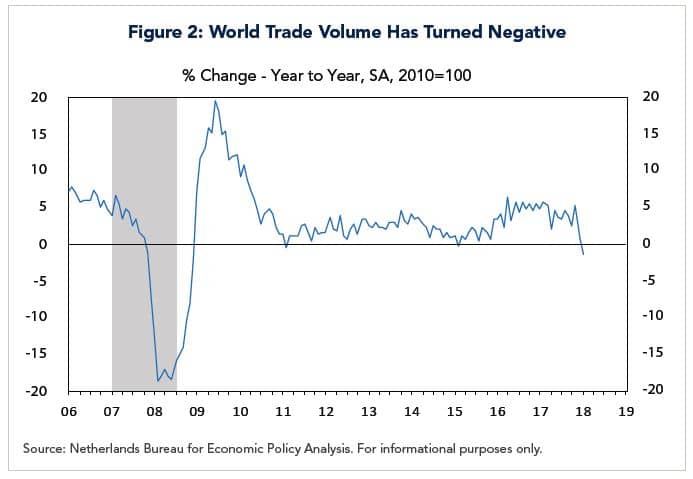 A key issue is whether the slowdown in global manufacturing and trade is nearly over. Optimists are calling for the global economy to stabilize by midyear primarily for two reasons. First, China’s government has eased both fiscal and monetary policies since the second half of last year, while the Fed made a dramatic shift in U.S. monetary policy at the beginning of this year. Second, investors are hopeful a truce will be reached between the U.S. and China on trade, and that this will help to revive growth of world trade.

Skeptics counter that China’s efforts to support the economy will be less effective than in the past. The primary reason is the country’s overall debt burden (measured by total debt to GDP) has nearly doubled since the Global Financial Crisis, and much of it has been directed recently to inefficient state-owned enterprises (SOEs). Consequently, China is confronting an ongoing slowdown in productivity growth. A further reason is that even if the U.S. and China are able to reach a truce on trade, there is uncertainty about how it will be enforced. Consequently, businesses may delay making capital spending decisions until there is greater clarity on this matter.

It is too early to tell which view is correct, as economic data have been mixed. One encouraging development is that manufacturing surveys for both China and the U.S. in March were better than expected.  Also, U.S. jobs growth in March rebounded to 196,000 from a weak report in February, and the unemployment rate held steady at 3.8%, which is close to a five decade low. However, surveys for countries such as Japan and Korea and those in Europe disappointed. Conditions in Europe, moreover, could deteriorate further if the British government is unable to decide how to exit the European Union.  With interest rates in the EU flat-to-negative, it is unclear how effective monetary policy will be in countering economic weakness.

Amid all of this, the U.S. economy proved to be resilient to weakness abroad last year: It expanded by 2.9% for the full year, buoyed by tax cuts that boosted growth above 3.5% in the second and third quarters.  During the fourth quarter, however, investors worried that a combination of tightening by the Federal Reserve and an escalation of U.S.-China trade tensions could weaken the U.S. economy, and possibly result in a U.S. recession.  This triggered a steep decline in the stock market and a widening in corporate credit spreads versus U.S. treasuries.

These moves were reversed to a large extent in the first quarter of this year amid a sea-change in U.S. monetary policy. After raising short-term interest rates four times last year while also shrinking its balance sheet, Fed officials signaled in January that they were about to pause in tightening policy and would be patient in raising rates for the foreseeable future.

The extent to which Fed officials have shifted their views on the economy and interest rates was further revealed in the communications that accompanied the March FOMC meeting. Specifically, Fed members now forecast that the appropriate path of Fed funds rate hikes in 2019 is flat, rather than the two rate hikes that were forecasted in December.  In addition, the Fed announced that beginning in May it will reduce the run-off of its Treasury holdings to $15 billion per month from $30 billion and end the unwind in September.

The Fed also downgraded its assessment of economic conditions, while maintaining its assessment that core inflation (which excludes food and energy) remains near its 2% target. It left its assessment unchanged about the balance of risks to the economic outlook, but was reluctant to state that risks were skewed to the downside.

While some observers believe the Fed’s next move will be to lower interest rates, we think this is unlikely as long as the economy expands in line with potential growth, which the Fed estimates to be slightly below 2%. Although growth in the first quarter could dip slightly below that rate, we believe it will be temporary, and we expect growth to average about 2.25% in the next three quarters. If so, we foresee bond yields settling into trading ranges around their current levels.

Amid heightened market volatility late last year, we opted to maintain our investment strategy of overweighting risk assets moderately, rather than pare back holdings of corporate stocks and bonds. This decision reflected our view that the Fed would not make a major policy mistake, and the risk of recession was not as great as was being priced into the markets. That proved to be the correct call, and we are continuing to maintain our strategy on grounds that stock and bond valuations are not at extremes and the risk of recession is low this year.

At the same time, we are cognizant of risks in the global economy. First, while markets have largely priced in a U.S.-China trade agreement, there are unresolved issues about how the agreement will be enforced.  Second, markets are also pricing in an improvement in China’s economy, with the Shanghai composite index having risen by more than 25% this year. Third, financial markets have not responded thus far to the possibility that the British government may not reach agreement on how to exit the EU, even though time is running out.

With respect to the U.S. stock market the biggest risk is a lackluster profits outlook: Earnings growth is likely to be flat-to-low single digits, following a rise of more than 20% for S&P 500 companies last year. Consequently, we are not adding to risk in our portfolios even though market optimism is high today.