Meet Our Family of Companies
Our site uses cookies to improve your visitor experience. By browsing our website, you agree to the use of cookies and agree to our privacy policy.
Markets were unusually calm in the first half of this year even though the U.S. economy grew less than expected and healthcare legislation stalled, which has delayed passage of a tax bill.
Nick Sargen July 11, 2017
Markets
Share:

Shifting Expectations in the U.S.

At the start of this year, investors were optimistic about prospects for the U.S. economy and equities in the wake of Donald Trump’s surprise victory.  With the Republican Party retaining control of both houses of Congress, it appeared that gridlock in Washington, D.C. was about to end and a pro-growth agenda would be enacted. Investors were particularly encouraged about the prospect of significant corporate and personal tax cuts and extensive deregulation of the American economy. This was apparent in a surge in consumer and business confidence readings, ongoing rallies in U.S. stocks and the dollar, and a spike in Treasury bond yields.

Today, at the midyear, it is apparent investors have altered their expectations considerably in the wake of several developments. First, U.S. economic growth in the first half turned out less robust than expected. It averaged close to the 2% trend rate since the expansion began eight years ago. As a result, forecasters have been downgrading their growth projections for the full year.

Second, on the policy front, Congressional Republicans have struggled to reach agreement to repeal and replace Obamacare, which was one of their top priorities during the 2016 campaign. While the House Republicans passed a bill by a narrow margin on the second attempt, it is unclear whether the Senate will be able to pass one, and if so, whether it can be reconciled with the House version. In the meantime, this has delayed consideration of tax legislation, and some observers now believe passage of a tax bill could be postponed until 2018.

Amid all this, it is now clear that gridlock has become even more entrenched. This is partly a response to political problems the Trump administration faces with respect to its handling of Russia, as well as to frustrations with the President’s combative style. While it remains to be seen whether Republicans and Democrats can coalesce on issues such as infrastructure, taxes and healthcare, the indications thus far are not encouraging.

For their part, market participants have reacted by largely ignoring developments in Washington, treating them as “business as usual.” Consequently, confidence readings remain elevated (Figure 1) along with the stock market, as equity investors cling to the view that meaningful tax cuts will ultimately be passed although timing is uncertain. 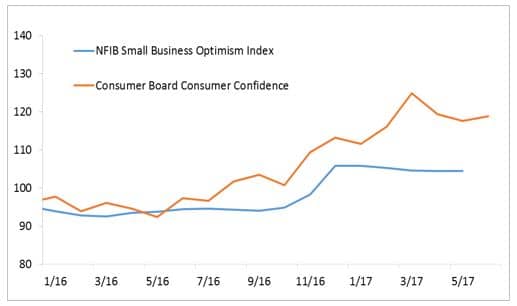 By comparison, the bond market and the dollar have reacted more noticeably to recent developments. Thus, ten-year Treasury yields closed the second quarter just under 2.3%, approximately 30 basis points below the high reached in the first quarter, while the trade-weighted dollar has fallen below levels before the November 2016 election. This suggests investors in the respective markets have differing perceptions about the future, as well as different investment time horizons.

By comparison, investors have been revising their expectations about overseas economies in a more favorable direction. Worries about a slowdown in China’s economy that were prevalent one year ago have diminished as the pace of activity picked up in the past four quarters. This mainly reflects a response to monetary policy easing and to fiscal stimulus. More recently, the Chinese government has taken steps to curb excesses in the property market including curtailing financing that is provided by shadow banks. The stabilization of China’s economy, in turn, has bolstered economies in Asia and other regions, although prices of oil and other commodities have softened.

The most significant improvement, however, has been among continental European countries, where economic growth is approaching 2% for the first time since 2010. Germany has led the way, fueled by strong export growth and a vibrant labor market: Germany’s unemployment rate has fallen to 3.9%, which is less than half the rate for the rest of Europe. It mainly stems from labor market reforms that were undertaken a decade ago to make it much more flexible.

On the political front, there has also been favorable news for the European Union (EU), as populist and anti-EU candidates lost elections in Austria, Holland, and France. The election of Emmanuel Macron as France’s new President (and the defeat of far-right candidate Marne Le Pen) has eliminated the risk of France withdrawing from the euro. Furthermore, with Macron’s newly-formed political party, En Marche, gaining a parliamentary majority, there is new hope that France will finally undertake much-needed labor market reforms.

Meanwhile, there are two key issues pertaining to the EU that are about to unfold. One is the prospective status of Italy: Because the Italian economy has stagnated for the past two decades, many observers perceive it to pose the greatest risk to the EU. Market participants will be anticipating the outcome of elections that must be held by next spring, where a populist leader could emerge. The other major uncertainty relates to the UK’s exit from the EU in the wake of the poor showing of the Conservative Party in the June election. It is generally perceived the odds of a “hard Brexit”—in which the UK would sever political, financial and trade ties with the European Union—have lessened in favor of a “soft exit,” in which Britain would cede some of its national sovereignty to retain some participation with EU members. Nonetheless, the negotiations are only beginning and it will take two years to resolve the matter.

Looking at the global economy as a whole, one of the most encouraging developments is a synchronized expansion is now underway for the first time since the start of this decade. This development, in turn, has translated into improved corporate profitability and rising stock markets in most countries.  According to The Wall Street Journal (July 1-2, 2017) all but four of 30 major indexes rose in the first half of 2017, a performance that is unmatched this decade.

In the United States, the stock market surge was led by a 14% rise in the Nasdaq Composite, while the S&P 500 and Dow Jones Industrial Average each rose by about 8%. Some of the rise is attributable to improved corporate profits, with that of S&P 500 companies trading at 18 times projected earnings over the next 12 months, the highest level in 13 years. Also, for a narrow group of companies that have led the charge — the so-called “FAANG” consisting of Facebook, Amazon, Apple, Netflix and Google — valuations are considerably higher. Consequently, some observers are warning that a correction could be looming, especially with a key measure of market volatility — the VIX — increasing recently from very low levels (Figure 2).

We believe investors who are concerned about U.S. equity market risk should consider diversifying abroad into overseas markets, especially countries or regions where profitability is improving and valuations are less stretched than in the U.S. We currently favor continental European markets on grounds that corporate profits are more highly leveraged to economic growth, because labor is more of a fixed cost than variable cost due to labor market rigidities. Also, we believe political risk having diminished and interest rates near record lows implies discount rates are quite favorable now.

Interest Rate Outlook: Normalization in the U.S. With Europe to Follow

Faced with this situation, we expect the Federal Reserve will continue to normalize interest rates while it is about to begin the much-anticipated process of allowing its balance sheet to shrink very gradually. With the Fed already having raised the funds rate by one quarter of a percentage point in each of the last three quarters, the bond market is pricing in one more rate hike in the second half of this year.

For their part, Fed officials are looking past softness in GDP growth and are focused instead on the decline in the unemployment rate to 4.4% and the potential for wage increases to accelerate if the labor market tightens further. Thus far, there is no indication that inflation or inflation expectations are rising. Nonetheless, the Fed continues to believe the Phillips curve, which depicts the relation between unemployment and inflation, will kick in at some point. Because the Fed is expected to begin allowing securities to roll off its balance sheet before long, it will likely temper the pace of interest rate increases, so that it does not unsettle the bond market.

Meanwhile, the ECB finds itself at a point where it can begin to think about normalizing monetary policy, after short-term interest rates in some member countries fell below zero. Policy makers view recent developments as indicating the EU economies are stabilizing and deflation is less of a threat than before. That said, Mario Draghi has signaled the ECB is not in a hurry to begin raising interest rates.

For some time now, our investment strategy has been to overweight risk assets such as corporate stocks and bonds relative to government securities on grounds that the risk of recession is not imminent and corporate balance sheets are generally in good shape. As shown in Figure 3, this strategy continued to work in the first half of 2017, as returns for stocks were quite favorable, and corporate bonds — both investment grade and high yield — outperformed U.S. Treasuries.

Looking ahead into the second half of this year, we continue to believe the U.S. economy will grow at a moderate pace near or slightly above trend and inflation will eventually hit the Fed’s 2% target, after dipping recently. Therefore, we are maintaining our strategy of overweighting corporate bonds relative to Treasuries. As noted earlier, the U.S. equity market is more of an enigma, as it has continued to climb steadily without any meaningful pullback even though investors have revised their expectations about the economy and policy outlook. Also, while profits reported by S&P 500 companies rebounded in the first quarter, the results for small and mid-sized companies were not as favorable, and profits in sectors such as energy, commodities, and retail are under pressure. As a result, we believe now may be a good time for investors to consider diversifying abroad, especially in European equities.