Meet Our Family of Companies
Our site uses cookies to improve your visitor experience. By browsing our website, you agree to the use of cookies and agree to our privacy policy.
After rising to a record high in September, the U.S. stock market experienced a steep sell-off in October. Recent market volatility could be a preview of what’s in store for next year.
Nick Sargen November 16, 2018
Markets
Share:

After rising to a record high in September, the U.S. stock market experienced a steep sell-off in October, with both the S&P 500 index and the NASDAQ index at one point posting declines of 10% or more from their peaks. This marked the first correction since February-March of this year, and it caused some observers to question whether the market could sustain a decline of decline of 20% or more, which would constitute a bear market.

The key factors contributing to the sell-off were worries that rising U.S. interest rates and a trade war with China would weaken the global economy. Thus far, the U.S. economy is on solid footing, and it will likely stay strong for a while longer: Real GDP expanded by more than a 3.5% rate in the past two quarters on the back of strong consumer spending, and confidence readings for consumers and businesses are at or near recent highs. Moreover, while the Federal Reserve is expected to continue raising short-term interest rates gradually into the first part of next year, it is unlikely to make a precipitous move with inflation (and unit labor costs) hovering close to its 2% target.

Meanwhile, the midterm elections do not appear to be having a major bearing on markets. The outcome was exactly what investors were expecting — namely, a split decision in which Democrats won control of the House of Representatives by a comfortable margin while Republicans solidified their control of the Senate. The stock market rallied immediately after the election, but it subsequently surrendered those gains.

One of the ironies is that market participants now appear comfortable with the prospect of gridlock, whereas two years ago they were excited that it had finally ended. Part of the explanation is the economy was growing at a much slower pace then — in the vicinity of 1.5% — and investors were hopeful the combination of corporate tax cuts and deregulation that the Trump administration and congressional Republicans favored would give the economy a boost. This is what ultimately happened, as economic growth this year is set to surpass the 3% threshold for the first time since the expansion began in mid-2009.

Meantime, the fiscal situation has deteriorated considerably. A combination of tax cuts and spending increases caused the federal budget deficit to increase by 17% in the fiscal 2018 to just under $800 billion.  Moreover, the U.S. Treasury has acknowledged that federal borrowing is likely to surpass $1 trillion in the current fiscal year and it is expected to remain above that level in ensuing years. This predicament partly reflects the aging of the population, as retiring baby boomers place added burdens on entitlement programs. With interest rates now rising and the deficit expanding, interest payments on the federal debt outstanding are the fastest growing government expense. They are on track to hit $390 billion in 2019, nearly 50% more than in 2017, and the Congressional Budget Office projects they will rise steadily in the coming decade.

The poor fiscal picture, in turn, will make it extremely difficult for Republicans and Democrats to agree on an infrastructure program, where there had once been bi-partisan support, let alone any changes in tax rates, either up or down. If anything, bickering over how to finance the federal budget imbalance is likely to intensify.

Nor are the midterm results likely to alter the current U.S. stance on trade with China.   While the Democrats are now able to block President Trump on some economic initiatives, his stance on China is close to the views of many Democrats. Indeed, trade tensions are likely to increase next year. President Trump has warned China that the U.S. government is prepared to raise duties on Chinese goods from 10% to 20%-25%, and it will could eventually place duties on all Chinese imports if China does not accede to U.S. demands to open its markets.

On the political front, some commentators have tried to draw inferences about the midterm results for the upcoming presidential election in 2020. One take, for example, is that the Democratic Party achieved the “blue wave” it was seeking in the House of Representatives, as it achieved a net gain of 38 or 39 seats, one of the largest shifts during a midterm election. The counter-argument is that while Democrats have a decided advantage in the most populace states, Republicans control the majority of small and mid-sized states, which gives them an advantage in the electoral college.

If history is any guide, the midterm election should not be taken as a reliable indicator of the ensuing presidential election. For example, Ronald Reagan, Bill Clinton, and Barrack Obama all went on to win a second term even though their party suffered significant losses in the midterm elections.

Normally, the outcome of presidential elections is determined by how well the economy fares in the run-up to the election: Recall the slogan during the Clinton era was “It’s the economy, stupid!" Although President Trump focused on immigration and border control in the midterms to solidify the Republican base, his re-election chances in 2020 will hinge on whether the economy continues to grow at a healthy clip or slows considerably. Thus, the prospects for Trump being re-elected would decline considerably if the U.S. economy were to slip into recession in late 2019 or the first half of 2020.

Can Record Profit Margins Be Sustained?

My take is the economy will continue to expand at a 3% pace into the first part of 2019, supported by strong consumer spending, which should provide support for the stock market in the near term. However, an economic slowdown is likely in the second half as the impact of tax cuts fade. Thus far, it is still too early to see a discernable effect of increased tariffs on the U.S. economy, but they are beginning to slow China’s economy, which will affect emerging economies that are suppliers to China. Moreover, as noted earlier, the likelihood is that the trade war will escalate further next year.

One of the key issue for investors is how long the current high profit margins can be sustained. They have recently climbed to a record of 11.5% as a result of rapid earnings growth and the corporate tax rate cuts enacted at the end of last year (Figure 1). Going forward, however, margins will be under pressure owing to rising wages, higher interest rates and a strong dollar.  Accordingly, profit growth next year is expected to slow considerably from the 20%+ pace this year. The growing uncertainty about the earnings outlook, in turn, is a major factor behind the stock market’s heightened volatility of late, and it could be a precursor of what’s in store for 2019. 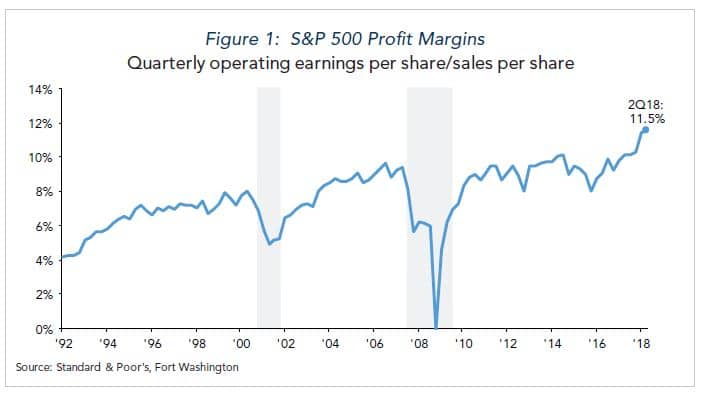