Meet Our Family of Companies
Our site uses cookies to improve your visitor experience. By browsing our website, you agree to the use of cookies and agree to our privacy policy.
Nick Sargen discusses the dominance of large tech stocks last year. He then presents reasons why market leadership may be changing.
By Nick Sargen January 22, 2021
Markets Equities
Share:

Their combined weight is near 23% of market capitalization, and the technology sector (which excludes some of the above that are categorized as communication) represents 38% of the index. By comparison, technology accounts for 6% of the US GDP and just 2% of U.S. employment.

Figure 1: Technology’s Share in the U.S. Economy and Stock Market 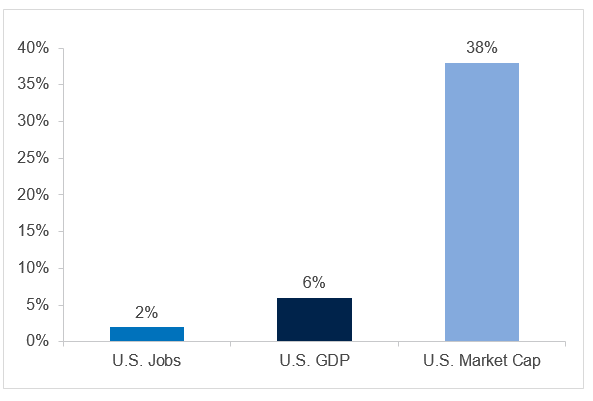 Source: JPMorgan. For informational purposes only. Data as of December 31, 2020.

The principal reason for the outperformance is investors viewed big tech as a winner from the COVID-19 pandemic. And for good reason. As consumers and businesses increasingly relied on digital platforms to transact, estimated EPS for technology companies rose by 6% in 2020 versus an overall decline of 16% for S&P 500 companies.

During the fourth quarter, however, there were indications that big tech may be surrendering its leadership. Returns for tech companies were closer to the middle of the pack as investors began to rotate to other sectors of the market that are cheaper. Valuations based on one year forward earnings, for example, are in the vicinity of 33 times for tech companies (and 40 times for FAANGM) versus 20 times for the rest of the S&P 500.*

One factor behind this move is the development of COVID-19 vaccines. They raise the specter of a return to normalcy during 2021 and thereby increase the appeal of value-oriented stocks that were beaten down last year.

Another factor is Joe Biden’s victory in the November elections. It raises the prospect of increased government spending to bolster the economy, which makes cyclical names more attractive. One of Biden’s priorities in the first hundred days is to follow up on the $900 billion relief package with further government support for households and municipalities.

Beyond this, the risk of a setback for the largest tech names has increased due to a change in the political landscape. Specifically, the dominant role a handful of tech companies play in the economy has drawn public scrutiny about the need for more forceful anti-trust legislation.

In early October, the Democrat-led House issued a report based on 16 months of investigations looking at allegations of anti-competitive behavior among four leading tech companies – Amazon, Apple, Facebook, and Google. This was followed by the Justice Department advancing antitrust lawsuits against Google in October and against Facebook in December, accusing it of anticompetitive behavior and arguing that WhatsApp and Instagram should be divested from it.

Dipayan Ghosh of the Harvard Kennedy School views the bipartisan support for greater regulation as arising from a shift in public sentiment against the largest tech companies.  At this juncture, it is too early to tell what policies the Biden administration will pursue.  However, Gosh foresees Congress and the White House focusing on reforming certain business practices aimed at:

Prior to the two Senate run-off elections in Georgia, the prospect for meaningful legislation being enacted was considered low because Congress was split.

Since then, the political landscape has changed with Democrats now controlling both houses, albeit with narrow margins. Progressives led by Senators Elizabeth Warren and Bernie Sanders already have called for breaking up big tech companies. And pressures for social media firms like Twitter and Facebook to regulate their content has heightened in the wake of the assault on Congress last week.

An article on Foreign Policy.com by Vivek Wadhwa and Tarun Wadhwa argues that even though Silicon Valley helped bankroll Joe Biden’s campaign, “the mood and context have changed utterly, and the traditional cozy relationship between the Democratic Party and Big Tech is on the brink of turning much more contentious.”  They cite seven reasons why Big Tech is in for a rough time.

Still, others maintain that Biden has been friendly to Big Tech in the past, and that he was relatively quiet about the technology industry throughout his campaign to win the White House.

My own view is Biden is likely to take a centrist stance on the issue. The challenge for his administration will be to update the current regulatory system relating to technology while avoiding policies that could worsen the problem.  Doing so will require balancing the need to support the digital revolution in a way that upholds democratic principles.

While it is too early to tell how regulatory policies will evolve, one change that seems inevitable is leading tech companies will most likely have to pay considerably more taxes than before.

During the campaign, Biden vowed to get tough on tax breaks for Big Tech and other companies that did not pay a fair share. In addition to proposing the corporate tax rate be increased to 28% from 21%, he advocated setting a minimum tax of 15% on companies’ book income and raising taxes on foreign earnings of U.S. companies located abroad.

The latter two policies are directed at companies like Amazon and other large tech firms that pay relatively little taxes. While it is unclear whether the Biden administration will be able to boost the overall corporate tax rate, there is greater bipartisan support for making leading tech companies pay more in taxes.

Weighing these considerations, my take is that returns for the largest tech companies are likely to be more muted.

A version of this article was posted to Forbes.com on January 12, 2021.

This article is for informational purposes only and should not be considered as investment advice or recommendation of any particular security, strategy, or investment product. Past performance is not indicative of future results. Neither Fort Washington nor its sources for the content herein are responsible for any damages or losses arising from any use of this information.

FANG in a Value Portfolio?

Why Markets Seem Immune From Politics