Meet Our Family of Companies
Our site uses cookies to improve your visitor experience. By browsing our website, you agree to the use of cookies and agree to our privacy policy.
The five largest U.S. stocks returned 35% YTD as of late July, compared with minus 5% for the remaining stocks in the S&P 500 index, and the outperformance of this select group has resulted in a large valuation premium for them relative to the rest of the market. This has caused some investors to worry the market is on shaky ground. We believe a replay of the tech bust in 2000 is unlikely; however, the risk-reward trade-off for these stocks has become less favorable as they have become a “crowded trade.”
By Nick Sargen August 11, 2020
Equities
Share:
Based on investment results so far this year, the answer is decidedly “yes” for many investors. Amid heightened market volatility linked to the pandemic, they have sought refuge in a select group of high-growth stocks which they believe may benefit as social distancing augments internet usage.

The five largest U.S. stocks — Microsoft, Apple, Amazon, Facebook, and Google (owned by Alphabet) — returned 35% YTD as of late July, compared with minus 5% for the remaining 495 stocks in the S&P 500 index. Each of them set new record highs in July, and collectively they now account for 22% of S&P 500 market cap, up from 19% in January of this year (Figure 1). 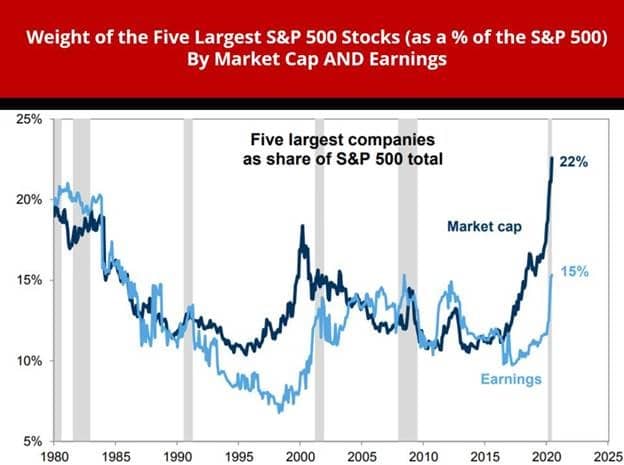 The outperformance of this select group has resulted in a large valuation premium for them relative to the rest of the market. According to Ben Snider of Goldman Sachs, the top five stocks trade at a 70% P/E premium to other S&P 500 stocks (31x versus 18x) based on one-year forward earnings estimates. He notes this is the largest differential in 20 years, but well shy of the 150% premium carried by market leaders at the peak of the Tech Bubble in 2000.1

This disparity in performance and the narrow underpinnings of the market’s surge since late March have caused some investors to worry it is on shaky ground. Moreover, their angst increased last week amid heightened tensions between the U.S. and China.2

My own take is a replay of the tech bust in 2000 is unlikely. However, the risk-reward trade-off for them has become less favorable as they have become a “crowded trade.”

Comparisons to the tech bubble and dot-com craze are misplaced for several reasons. First, the leading tech companies today have demonstrated their long-term earnings potential since the bubble burst in March of 2000: Three of them — Microsoft, Apple, and Google — ranked in the top three of NASDAQ then, and Amazon was in the top ten. (Facebook’s IPO occurred in 2012.)

Second, they have solid balance sheets, and their growth prospects are protected by high barriers to entry. This has enabled them to earn returns well above their cost of capital, and it affords them a margin of safety if expectations are not realized. Based on their prospective long-term earnings, their current valuations appear reasonable.

Still, many investors question how much longer growth stocks can outperform value stocks, considering that the gap in valuations as measured by one-year forward P/E multiples is the widest since the onset of the 2008 financial crisis.

A research report by Michael Kantrowitz and Emily Needell of Cornerstone Macro helps to shed light on this issue.3  The authors contend investors are willing to pay a higher premium for companies with sustained growth prospects mainly for three reasons:

My own take is the first two factors are valid reasons for investors to pay higher premiums for “franchise value” companies. However, the third is not. It presumes the Federal Reserve not only would act to rescue the stock market — but it would also purchase stocks of individual companies that sold off markedly. This is highly unlikely, as the Fed would be subject to public scrutiny for doing so.

I would add a fourth factor to this list — namely, the added premium the leading tech companies command since the COVID-19 outbreak. One consideration is they generate more predictable earnings than cyclical stocks. Also, some investors think the growth prospects of internet companies are enhanced by social distancing and the need for people to work from home.

In this respect, investors are not being “irrationally exuberant” as they try to discern winners and losers from the pandemic. However, even if leading tech companies are supported by fundamentals, extreme market concentration creates both macro and micro risks. As Ben Snider notes: “From a macro perspective, record concentration means the S&P 500 has never been more dependent on the continued strength of its largest constituents or more vulnerable to an idiosyncratic shock to any of these stocks.”4

In this regard, the U.S. experience with the “Nifty Fifty” stocks in the 1970s offers an important lesson for investors. The term was a designation for 50 large-cap stocks on the NYSE that were widely regarded as “Blue-chip” stocks that should be bought and held indefinitely. They are credited for propelling the bull market of the early 1970s, but they subsequently under-performed when economic conditions worsened during the first and second oil shocks.

When the Nifty Fifty strategy failed to deliver the expected results, investment strategies became more diversified in the 1980s. Over time, they gave way to passive investing as it became more difficult for stock pickers to outperform the market consistently.

The bottom line is there are valid reasons for the leading tech stocks to have outperformed substantially over the past two decades. However, as companies grow rapidly, it also becomes harder for them to maintain their competitive edge as their businesses become more complex and the environment changes.5 Looking ahead, the prospect of a “blue wave” in the upcoming elections raises the odds that the leading tech companies could face higher tax rates as well as increased regulatory scrutiny.

In the end, there is no way of knowing when market leadership will change. Indeed, there have been numerous false starts over the past decade when value stocks appeared poised to outperform growth stocks. Nonetheless, now may be a good time for investors to re-evaluate positions in high-flying stocks, as their risk-reward is less favorable and the economic and political environment is highly uncertain.

The End of the Dollar’s Remarkable Surge