Meet Our Family of Companies
Our site uses cookies to improve your visitor experience. By browsing our website, you agree to the use of cookies and agree to our privacy policy.
Small businesses have been significantly affected by the lockdown due to the coronavirus pandemic. The federal government has prioritized these businesses, passing a second bill supplementing the Paycheck Protection Program (PPP). However, opinions on PPP vary. In the first quarter, many larger cap stocks outperformed small cap stocks, but small caps have shown signs of recovery.
By Nick Sargen June 2, 2020
Markets Policy Equities
Share:

Small Businesses: The Epicenter of the Great Lockdown

Throughout the past fifty years, there has been at least one U.S. recession in each decade except the last one. Previously, cyclically-sensitive sectors such as housing, autos, manufacturing, and financial services were the hardest hit, while the service sector was resilient. Because these sectors are also the most interest-rate sensitive, policymakers were able to combat recession by lowering interest rates and providing temporary fiscal stimulus.

The current recession is different because the coronavirus pandemic has necessitated an extensive shutdown of businesses. The fallout has been especially severe on small and medium size businesses that have up to 100 employees. Collectively, they account for roughly one half of the private U.S. workforce (Figure 1), and they represent the vast majority of the 40 million of jobless claims filed in the past two months.

The White House and Congress were quick to recognize their plight. An innovative program – the Paycheck Protection Program (PPP) included in the CARES Act – provided initial funding of $349 billion to incent small enterprises to keep their workers on the payroll. The Small Business Administration (SBA) will forgive PPP loans if all employees are retained on the payroll for eight weeks and the money is used for payroll, rent, mortgage interest, or utilities. When the initial funds were fully deployed, a supplement bill was enacted that provided an additional $321 billion in funding.

Assessing the Effectiveness of PPP

The fiscal package for small businesses offered through the SBA is modeled after Germany’s Kurzarbeit program that has been in operation for more than 100 years.1 The German program subsidizes enterprises, large and small, for furloughing workers during economic downturns. The program proved successful in tempering job losses during Germany’s reunification in the early 1990s, and Germany stands out as having experienced relatively few job losses during the current pandemic. As a result, it has attracted considerable attention, and countries such as France, Italy, Japan, and Korea have adopted versions of it.

While the merits of Germany’s program are widely recognized, the big unknown is how easily it can be adapted in the United States, especially considering PPP is a brand new program. By now, news stories are rife about problems small business owners have encountered in applying for the PPP program while some larger businesses received funding during the initial round.

These issues were supposed to be addressed in the second round of PPP funding, but there are still some glitches. For example, some business owners are concerned they may have to repay the SBA loans if all the conditions of the PPP loans are not met. Another issue is that stepped-up benefits of $600 weekly that workers receive from unemployment insurance create incentives for them to stay unemployed rather than be furloughed from their jobs.

One can only sympathize with the challenges officials face today when they must dole out loans and grants to a multitude of businesses. By comparison, during the depths of the Global Financial Crisis, a single action – the decision to convert the proceeds of the TARP program to recapitalize the largest financial institutions – helped to restore investor confidence in the safety and soundness of the financial system.

That said, one should not lose sight of the potential that the PPP program provides. Jim Glassman of JPMorgan Chase estimates that as of the first week of May, PPP loans of $534 billion should be able to cover the payroll costs of 46 million people who work at small establishments.2 Once the remaining $125 billion have been disbursed, he estimates PPP funding should pay the bills for 57 million people who work at small enterprises and whose businesses have been closed temporarily.

The caveat is the effects of PPP won’t be fully visible until businesses receive the proceeds from the approved loans. According to a recent Census Bureau survey, 75% of respondents overall sought PPP assistance, and 38% had been approved for the program.

Glassman notes that only a small portion of the funds were disbursed when the Bureau of Labor Statistics took its labor market survey in April. It showed the unemployment rate spiking to 14.7%. By the end of April, 40% of PPP loans were disbursed and the trend continued into May. Glassman concludes with an upbeat message: “If the PPP program does what it is trying to do, unemployment should shrink back in the May and June jobs report.”3

The critical assumption is the impact of the pandemic will be temporary and PPP will help bridge the gap until businesses are reopened. In the meantime, however, more than 100,000 businesses have been shut permanently, and 34% of them are either paying reduced rent or delaying payment.4

It’s anyone’s guess what the final tally will be. However, Mark Zandi, chief economist of Moody’s Analytics, has ventured that more than one million micro firms – those with fewer than 10 workers – are at risk of failing.5 If so, the decline in unemployment is likely to be much more gradual than the optimists envision.

Whichever view is correct will have implications for investment outcomes. Thus far, investors have been banking on larger firms holding up better than smaller ones during the downturn. Small cap stocks, as measured by the Russell 2000 Index, underperformed the S&P 500 Index by eleven percentage points in Q1 2020. This was the widest gap since the tech bubble burst in 2000 (Figure 2). Since then, small caps have begun to make up ground with market volatility remaining well above historical averages as news headlines dominate daily trading activity.

Our Small Cap strategy, is focused on firms with market capitalization of less than $5 billion, and it has an average firm capitalization of about $2.5 billion. It is currently targeting companies that generate adequate cash flows to cover the period of economic turbulence. The approach identifies companies that had favorable prospects before the pandemic, and which are making adjustments to ensure their long-term viability.

One of the main challenges in the current context is lack of visibility about earnings prospects in the near term. Accordingly, the approach looks out 2-3 years, when economic conditions will likely have stabilized, to assess normalized earnings and appropriate valuations for each name. Finally, while the Russell 2000 Index typically underperforms during bear markets, it frequently outperforms when the stock market begins to recover. 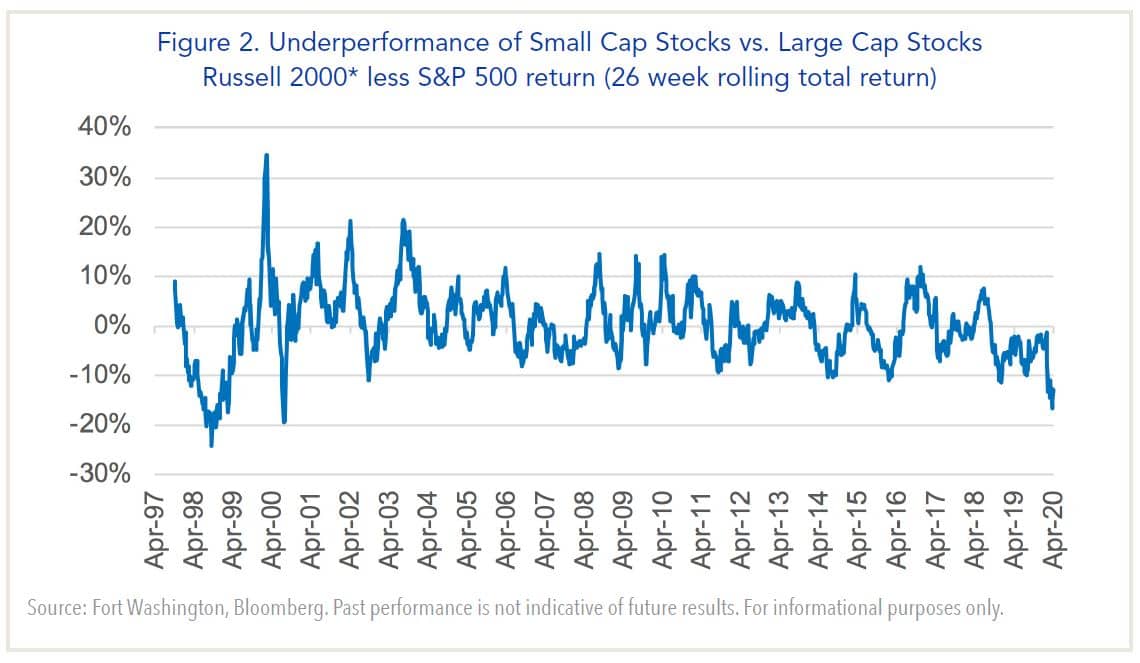 1 See Jim Glassman, JPMorgan Chase, “Weekly Insights on Markets & the Economy,” April 6, 2020.
2 Jim Glassman, “Weekly Insights on Markets & the Economy,” May 11, 2020.
3Ibid., p.1.
4Heather Long, "100,000 small businesses, closed forever," Washington Post, May 12, 2020.
5Ibid.
*Frank Russell Company (FRC) is the source and owner of the Russell Index data contained or reflected in this material and all trademarks and copyrights related thereto. The presentation may contain confidential information pertaining to FRC and unauthorized use, disclosure, copying, dissemination or redistribution is strictly prohibited. This is a FWIA presentation of the Russell Index data.  Frank Russell Company is not responsible for the formatting or configuration of this material or for any inaccuracy in FWIA’s presentation thereof.