Meet Our Family of Companies
Our site uses cookies to improve your visitor experience. By browsing our website, you agree to the use of cookies and agree to our privacy policy.
Investors are now assessing when recovery will begin and what shape it will take, posing the question: What lies ahead? The answer hinges on the spread of the coronavirus and how quickly businesses and jobs can be restored.
By Nick Sargen April 7, 2020
Markets
Share:

Background: What We Know Today

The world we have known has changed dramatically since the onset of the coronavirus pandemic. It has necessitated unprecedented restrictions and shutdowns of major segments of the U.S. and global economy. In the U.S., more than 90% of the population is now subject to quarantines. Even then, medical advisors to the White House estimate the U.S. death toll could reach 100,000 to 240,000 people.

By now, it is evident the U.S. and global economy have entered a recession. The number of people filing jobless claims spiked by 10 million in the past two weeks, far exceeding any comparable period (Figure 1). The March jobs report based on data through mid-month showed the unemployment rate rising to 4.4%, but the actual rate is estimated to be about 10%. It is expected to surpass the 10.8% post-war peak reached in 1982 before long.

At the same time, purchasing managers’ surveys for manufacturing and services have declined worldwide. One difference from previous recessions is the service sector, rather than manufacturing, is the epicenter. In the U.S., small businesses with less than 100 employees are most at risk. They account for 40 million workers, while another 23 million are self-employed.  Collectively, this group represents 45% of the U.S. private work force. 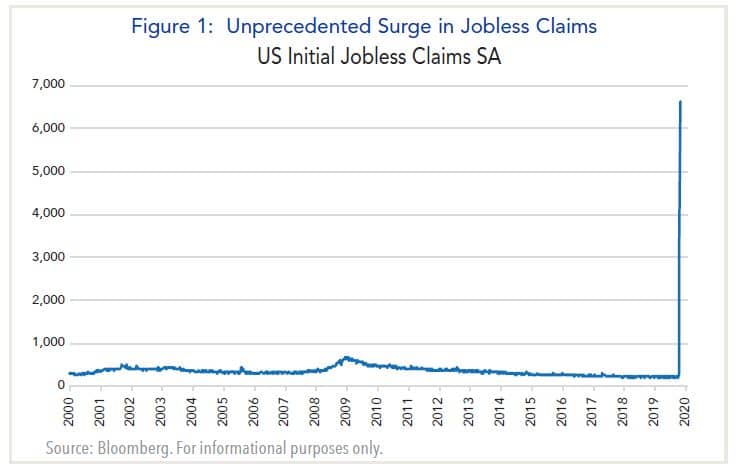 Financial market volatility has been unusually high amid rapidly changing developments and the influence of algorithmic trading. From February 20 until March 23, the U.S. stock market plummeted by 35%, the swiftest decline since the Great Depression. Since then, the stock market has recovered somewhat. By quarter’s end, the S&P 500 Index posted a net return of minus 20%, the worst quarter since 2008, and corporate bonds also sold off markedly (Figure 2). It has rallied since then amid signs the spread of coronavirus may be ebbing in Asia, Europe, and possibly New York City.

The recent stabilization of financial markets reflects sweeping actions by the Federal Reserve to bolster credit markets, and passage of the “Coronavirus Aid, Relief and Economic Security Act” commonly known as the “CARES” Act. The $2.2 trillion package is equivalent to 10% of GDP, roughly double that of the American Recovery and Reinvestment Act (ARRA) enacted after the 2008 financial crisis.  This makes it the largest single piece of legislation since the New Deal in the 1930s.

Investors are now assessing when recovery will begin and what shape it will take. The answer hinges on the shape of the spread of the coronavirus: The more successful the U.S. and other countries are in “bending the curve” of the virus’ incidence, the sooner businesses will be able to resume activity.

When the virus spread to the U.S. in early February, investors were generally upbeat that the worst would be over by spring and the economy would experience a V-shaped recovery. More recently, optimism has given way to realism that the virus will last longer and recovery will be gradual.

The most important task for policymakers is getting the unemployed back to work while ensuring their health and safety. With that goal in mind, President Trump followed the advice of his medical experts by extending the White House’s social distancing guidelines through the end of April.

Scholars affiliated with the American Enterprise Institute, including former FDA Commissioner Dr. Scott Gottlieb, have outlined a strategy for phasing in new guidelines. They argue rules should be relaxed on a regional basis and three conditions must be met to relax current restrictions:

Meanwhile, investors are monitoring how other countries are faring.  Singapore and South Korea are widely recognized as leaders in deploying extensive testing, contact tracing, community surveillance and quarantining of people and businesses. Their rates of COVID-19 incidents and deaths are considerably below the United States, which experienced a six-week delay in testing.  For a discussion of best practice procedures see William A. Haseltine’s commentary “Why America is Losing to COVID-19.”2

In Europe, Germany stands out as having a low death rate from COVID-19.  One reason is it conducted testing much earlier than others and on a broader scale. In addition, Germany is recognized for having highly-specialized doctors and modern intensive care facilities.

China got off to a slow start in recognizing the problem but then moved aggressively in shutting down major parts of the country. As a result, the worst of the pandemic appears to be past, and efforts are underway to restore economic activity. The Chinese economy is estimated to have contracted at a 10% rate or more in the first quarter. One bit of encouraging news is China’s manufacturing index increased to 52.0 in March from 35.7 in February. This suggests activity is stabilizing, albeit at a lower level than during 2008-2009.

Prospects for the global economy ex-China, however, are not encouraging.  According to Mickey Levy of Berenberg Securities, global trade volumes are set to decline sharply in the months ahead, similar to the 20% peak-to-trough decline during the 2008-2009 global recession.3  In addition to shutdowns in advanced nations, emerging market and developing economies are suffering much more than in 2008-2009.

Levy concludes that declines in global trade and production are set to be rapid and steep, but the rebounds look to be slow and choppy. In addition to the impact of COVID-19, the dramatic collapse in oil prices to 20 year lows has upended the entire oil and gas industry and its suppliers worldwide.  Reports that the U.S. is working with Saudi Arabia and Russia to attain production cutbacks have stabilized oil prices, but the outlook is uncertain.

What Is Priced Into Markets & Tail Risk

With markets being extraordinarily volatile since late February and algorithmic trading magnifying daily movements, it is difficult to discern what information is being priced into markets. Companies have ceased offering guidance on quarterly earnings, and estimates of Wall Street analysts are out of date.

That said, our take is investors are prepared for the global economy to experience a severe downturn through midyear that is followed by an improving trend in the second half.  The main risk is the downturn could be more prolonged, either if the virus is not contained before long or consumers stay cautious once lockdowns are relaxed.

Regarding tail risks, or worst-case outcomes, few investors foresee a global depression. However, Harvard economist Kenneth Rogoff, who has studied 800 years of crises, offered the following stark assessment in a recent interview:4

“On the peak-trough, the US probably won’t hit Great Depression levels.  But if you look at the world economy – on the depth of the downturn – there is a good chance it could look as bad as anything over the last century and half.  If we are back to 95% of normal in two years, it will be a lot better than the Depression.”

Rogoff and other prominent economists are skeptical of a V-shaped economic recovery partly because they foresee lasting damage to small businesses, as well as to airlines, hotels, and retail.

Recognizing this risk, the Small Business Administration’s $350 billion Paycheck Protection Program (PPP) is intended to keep 17 to 33 million people on the payrolls if everyone who qualifies for it receives assistance.   It is modeled after a German program that has been in place since 1910 that has proved highly effective at keeping workers on their jobs during economic downturns. However, because PPP is a new program in the U.S., it is unclear how quickly it can be rolled out and whether it will aid companies that are most at risk.

Assuming the PPP program is partially successful in enabling laid off workers to return to their jobs, unemployment should decline in the second half of this year. Probably the best that can be expected, however, is economic activity will begin to stabilize in the third quarter before growth turns positive. The big unknown is when the level of U.S. economic activity will return to its peak at the beginning of this year.

Weighing these considerations, we believe it is premature to declare the worst is over for financial markets. Indeed, investors should be prepared for markets to stay volatile as the U.S. economy deteriorates.

That said, the marked widening in corporate credit spreads since February has improved the risk-reward trade off considerably. Investors can now earn higher yields while also upgrading the overall quality of bond portfolios.  And while U.S. Treasuries are safe in terms of credit risk, long-dated Treasuries could see prices drop significantly once interest rates rise.

Valuations in equities have also improved considerably as a result of the steep decline in prices. While the near-term outlook for corporate profits is bleak, the U.S. stock market is effectively pricing in a permanent lowering of the long-term (real) growth rate to about 4% per annum. This is well below the historic average of 7% per annum, and in our view, presents investors with some long-term opportunities.5

In the current circumstances it is understandable that investors may not be comfortable about increasing risk in their portfolios. However, one of the recurring themes of financial shocks is that markets often over-react to the downside. While investors typically absorb losses during the down phase of the cycle, it is important they have the means to stay invested to capture the eventual upside phase.