Meet Our Family of Companies
Our site uses cookies to improve your visitor experience. By browsing our website, you agree to the use of cookies and agree to our privacy policy.
Investor sentiment about the coronavirus has shifted as the virus spreads. While forecasters have been lowering projections for global growth in 2020, we see a U.S. recession as unlikely and are positioning balanced portfolios close to their strategic allocations.
By Nick Sargen March 3, 2020
Markets
Share:

Market Backdrop: From Complacency to Fear in a Week

Prior to last week, investors were complacent about the global economy and markets. Many believed the strong stock market showing since October would continue indefinitely with the global economy showing signs of recovery amid the phase-one trade truce between the U.S. and China. Although U.S. corporate profits were flat in 2019 following a strong showing the previous year, Wall Street analysts were calling for profits to pick up as the global economy gained traction this year.

Until last week, investors by and large shrugged off the risk that the coronavirus outbreak in China would cause economic growth to slow worldwide. The consensus view was that the quarantines imposed in China following the Lunar New Year would cause the Chinese economy to slow for a quarter or two, but the damage to the global economy would be contained.

This assessment was based in part on the experience during the Severe Acute Respiratory Syndrome (SARS) outbreak that occurred in 2003, which lasted six months and killed 774 people worldwide. However, investor sentiment shifted abruptly last week amid reports that the CD-19 virus had spread to Korea, Japan, Italy, and Iran, and about 3,000 people had died from it.  Subsequently, the CDC issued warnings against non-essential travel, and there were numerous media reports about business activity worldwide being disrupted by quarantines in China and other countries.

The impact on financial markets last week was the most severe since the 2008 financial crisis. The U.S. stock market entered correction territory with the major indices declining by 12%-13%, while volatility as measured by the VIX surged to its highest level in nine years (Figure 1).  This was accompanied by a steep plunge in Treasury bond yields, which fell to record lows (Figure 2). 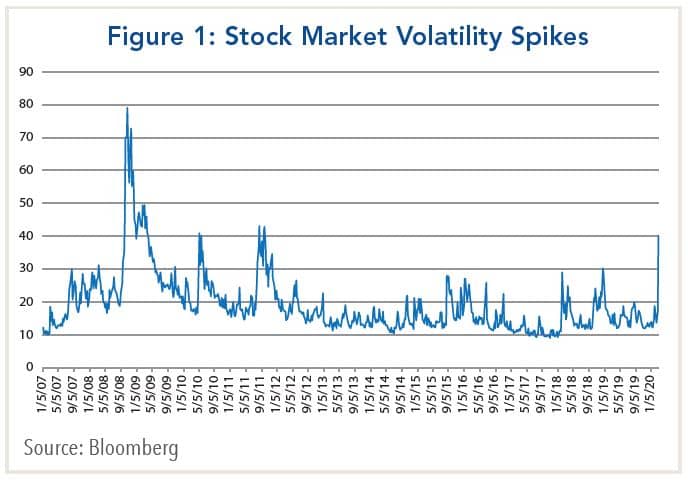 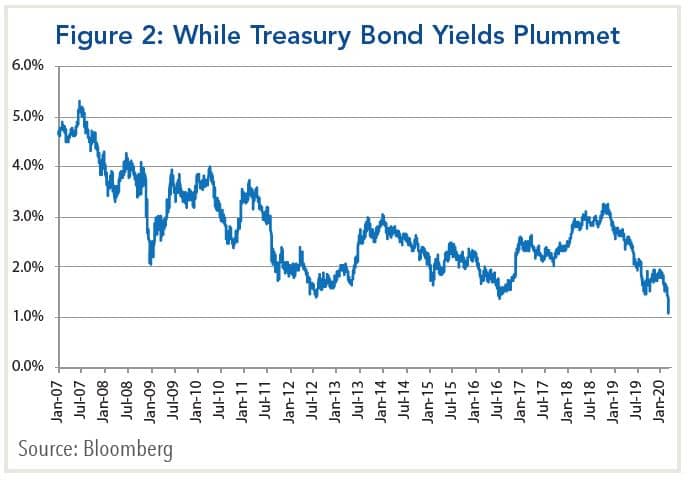 At the time of the announcement, Fed Chair Jerome Powell emphasized that unlike previous bond-buying programs called quantitative easing, or QE, the purpose of the operation was not monetary stimulus. Rather, the intent was to keep money market rates in line with the Fed’s goals. Fed officials have emphasized the operations are limited to shorter-dated government debt rather than longer-dated instruments, and that the balance sheet expansion will eventually be phased out. During the press conference that accompanied last week’s FOMC meeting, Powell indicated the purchases of short-dated Treasuries would continue into April, when most tax payments occur, but would be phased down thereafter.

Amid these developments, forecasters have been lowering their 2020 growth projections for China and the global economy. Previously, the consensus among economists was that China’s real GDP growth in the first quarter would slow to about 4% from the 6% rate that had been attained in 2019.  However, based on initial readings for February, the outcome is likely to be much worse, and many now believe the Chinese economy is contracting: China’s purchasing manufacturers index (PMI) for February showed the steepest drop since the 2008 financial crisis, with the index falling to 35.7 from 50.0 in January. Moreover, the declines in new orders and employment were even steeper.

Such an outcome carries important implications for the global economy due to China’s role as the world’s main manufacturing hub. The curtailment of normal activities, including travel and other services, will depend on how long it will take before the spread of coronavirus is perceived to be ebbing.   While the incidence of reported coronavirus cases in China appears to have peaked in February, it will likely still take considerable time to resume normal business activity. The reason: Many businesses have been shut down completely, and migrant workers are stranded in their home towns.

Economic forecasters are now deploying scenario analyses to convey the range of possible outcomes. The most optimistic call is for economic activity in China to be restored by mid-year, while less favorable scenarios do not envision normalization happening until later this year.

Regarding the world economy, the Organization for Economic Cooperation and Development (OECD) has weighed in that global growth could be cut in half, to 1.5% from 3.0%, if the coronavirus outbreak sweeps through Asia-Pacific, Europe, and North America. According to the organization’s chief economist, Laurence Boone, “This scenario would put Japan and Europe in recession, and the U.S. close to zero.”1

We would caution, however, that projections made at this juncture are based on scant information, and the situation is very fluid: We are dealing with a situation in which probabilities cannot be assigned to possible outcomes. Therefore, forecasts that are being made are tantamount to guesses of what might happen depending on how the coronavirus epidemic unfolds.

Central Banks to the Rescue

Amid this uncertainty, market participants once again were counting on the Federal Reserve and other central banks to ease monetary policies by lowering interest rates and/or expanding their balance sheets. With respect to the Federal Reserve, the bond market was pricing in a cut of 50 basis points in the federal funds rate that was announced on March 3rd.

Most economists maintain that monetary policy easing will not be able to counter the impact of coronavirus on the real economy because it is a supply shock. However, the case for policy easing is that it would help lessen the risk of a loss of confidence if the U.S. and global stocks were to continue plummeting. Indeed, the recent market chatter about a rate cut is having a calming effect on the stock market.

That said, with interest rates in the U.S. at record lows and those abroad at zero or negative, the scope for monetary policy easing today is quite limited.  In the end, how the coronavirus evolves will be far more important than what the Fed does or does not do.

Finally, what should investors do in these circumstances?

To a large extent, the answer depends on one’s risk profile and investment horizon. In our own case, we are maintaining balanced portfolios close to their long-term strategic norms because we believe the effects of the coronavirus on the U.S. economy will ultimately be temporary. Thus, while economic growth in 2020 will be more subdued than we previously envisaged, it will likely recover once normal business activity is reestablished. We also expect the U.S. economy to hold up better than those in Asia and Europe because the U.S. is less reliant on international trade and is more isolated geographically.
We also recognize that the sell-off in equities last week was both severe and broadly-based, which has created some buying opportunities. That said, investors should be prepared for volatility to remain unusually high until there is evidence the virus is ebbing globally.