Meet Our Family of Companies
Our site uses cookies to improve your visitor experience. By browsing our website, you agree to the use of cookies and agree to our privacy policy.
Senior Economic Advisor Nick Sargen shares his insight on monetary policy easing, trade tensions and the impact on the U.S. economy, and possible investment implications.
By Nick Sargen October 3, 2019
Markets Economics
Share:

The U.S. bond market turned highly volatile in the third quarter, following a nine-month stretch in which the yield on the 10-year Treasury fell from a peak of 3.2% in November 2018 to a low of 1.45% in August. During this period, the Treasury yield curve became mildly inverted as the ten-year yield briefly fell below the two-year yield. The inverted yield curve fueled worries that an escalation in the U.S.-China trade conflict could weaken the global economy and eventually spawn a U.S. recession.

These fears subsided in September amid hopes that upcoming talks between the two governments would produce a truce and indications that U.S. consumer spending was expanding at a healthy clip. Bond yields rose from near-record levels on these developments, with the 10-year Treasury yield ending the third quarter at 1.67%. It marked the third time since the economic expansion began ten years ago that the ten-year yield pierced 1.5% and bounced off that level (Figure 1). 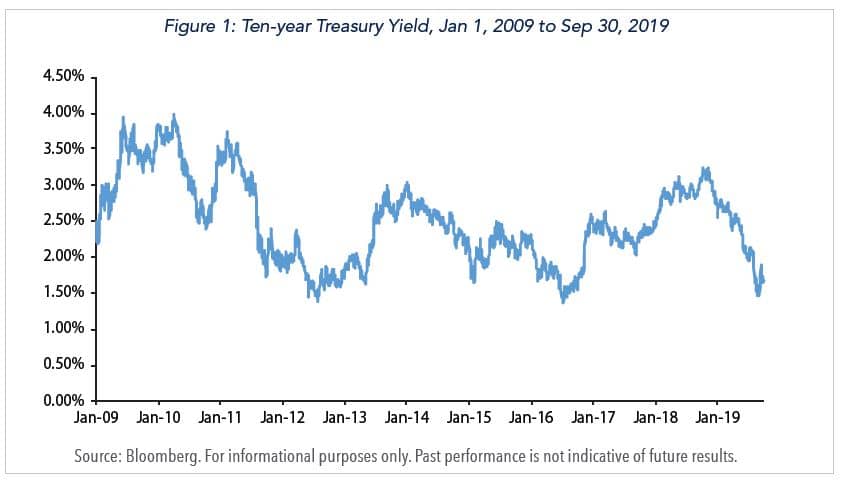 Meanwhile, the U.S. stock market sold off in August after rising fairly steadily most of this year. This occurred as the Chinese currency weakened beyond the level of RMB 7 per U.S. dollar, and the U.S. Treasury Department subsequently declared China to be a “currency manipulator.” Since then, the Chinese currency has stabilized and fears that the trade war could morph into a currency war have lessened. The stock market, in turn, rallied and it ended the quarter close to its all-time high, posting a year-to-date return of 20.6%. (Figure 2).

What Is the Bond Market Signaling?

There is general agreement that some of the precipitous decline in long-term bond yields since November reflects market expectations that the Federal Reserve will lower the federal funds rate from 2% to the vicinity of 1% by the end of 2020. Beyond this, the term premium – i.e., the difference between long-term bond yields and short-term rates – has turned negative by a record amount.

There has been an extensive debate about what an inverted yield curve is signaling. Some commentators maintain an inversion indicates the bond market is pricing in the risk of a U.S. recession, but we are not convinced. The reason: previous inversions occurred as the yield curve was rising in response to increased inflation expectations, whereas the yield curve has been falling recently and interest rates are close to historic lows.  Furthermore, there is no evidence of a flight to quality, in which corporate credit spreads widen considerably.

The most likely explanation is that U.S. yields have been dragged down by plummeting bond yields abroad, especially in the euro-zone: Over the past nine months the volume of negative government bond yields worldwide tripled to about $16 trillion. With growth in the Eurozone slowing to less than 1% and the German economy on the cusp of recession, the ECB recently lowered short-term rates by 10 basis points to minus 50 basis points, while it also resumed its program of quantitative easing. The German government bond market is now pricing in interest rates staying negative for the next six years.

Impact of the Trade Conflict on the U.S. Economy

The main impact of the trade war thus far has been felt in the manufacturing sector, which accounts for about 12% of the overall economy. The ISM manufacturing index, for example, recently dipped below the level of 50, which implies more respondents see business conditions worsening than improving. At the same time, surveys of small businesses show a decline in confidence readings, albeit from record levels.

Overall business investment has been sluggish since the trade conflict began in mid-2018. Moreover, as multinationals re-examine their global supply chains, they are seeking to diversify away from China, which has resulted in less investment there.

By comparison, the services sector, which accounts for 85% of the economy has held up well, as it is less affected by trade considerations. Also, consumer spending, which represents close to 70% of aggregate demand, has been growing at a healthy clip, with households benefiting from low unemployment and moderate wage increases. Moreover, the personal saving rate is in the vicinity of 8%, which means households have a cushion in the event the economy softens.

Prospects for a Trade Truce, But No Tariff Rollback

One factor supporting the stock market is the perception that the U.S. and China will reach a temporary truce during the next round of negotiations that are scheduled for October. Negotiations broke down after the June G-20 meeting, when China was not prepared to buy U.S. agricultural goods in exchange for a delay in tariff increases that were slated for September.  However, it now appears China is willing to reconsider, partly because prices for pork and soybeans have surged there.

From the U.S. side, President Trump’s action to announce two rounds of tariff hikes in August were opposed by his advisors who strongly support a tough stance on China. However, there are indications Trump may be listening to concerns that further tariff hikes could hurt consumers and damage the U.S. economy. The reason is they will largely be applied to goods that consumers purchase, for which there are few substitutes.

The trade war has also gone on long enough that both businesses and investors are skeptical a deal to end the conflict can be reached this year. For example, a recent poll conducted by Cornerstone Macro shows that more than 85% expect the status quo will be maintained, versus 10% that expect a further escalation and less than 4% who expect the conflict will be resolved.1

In the event a truce is reached, the prospects for a recession would lessen. However, if the negotiations break down and the conflict escalates, the risk is that businesses may begin to curtail hiring, which would hurt consumer confidence.

Fed to the Rescue

The uncertainty over trade poses a dilemma for Fed officials, who must decide whether to ease monetary policy further to protect against economic weakness or to keep policy unchanged on grounds the economy is performing satisfactorily. Thus far, the Fed has opted to err on the side of caution, lowering the funds rate by 25 basis points at each of the last two FOMC meetings.  While Chairman Powell has indicated the Fed is prepared to ease further to extend the expansion, he also stated that further changes would be data dependent.

Our own take is that with interest rates close to historic lows in the U.S. and negative in Japan and the euro-zone, there is little policymakers can do to revive growth. The best that can be hoped for is they can stabilize the respective economies and boost risk assets.

Faced with this predicament, we are maintaining our investment strategy as we await the outcome of trade negotiations. Our fixed income portfolios are generally neutral with respect to duration and moderately overweight credit risk relative to U.S. Treasuries. In equity portfolios, we are currently overweight companies with high franchise value considering business conditions are late in the cycle.

Will the Trade War Spawn a Currency War?