Meet Our Family of Companies
Our site uses cookies to improve your visitor experience. By browsing our website, you agree to the use of cookies and agree to our privacy policy.
Ten-year yields currently are around 2.1%, their lowest level since mid-2017, and about 115 basis points below the high of 3.25% reached last November.
By Nick Sargen, Dan Carter June 18, 2019
Fixed Income Economics
Share: 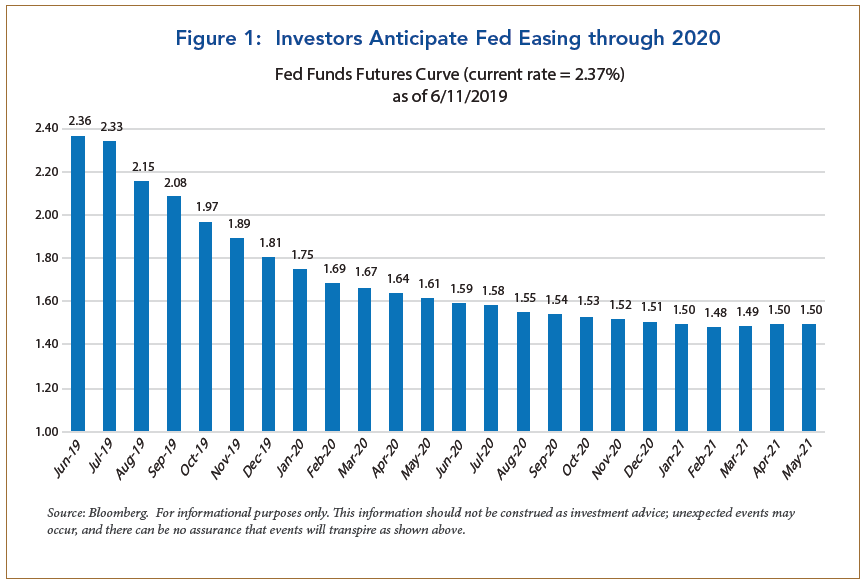 The on-again off-again saga over the use of tariffs by the Trump administration has been in full display since early May. Just when it seemed the U.S. and China were close to striking a deal over trade, President Trump pulled the plug by announcing that China had backed away from prior commitments, and the U.S. government responded by increasing tariffs on $200 billion of Chinese imports from 10% to 25%. Moreover, Trump has subsequently warned that duties could be extended to another $300 billion of imports if China does not comply with U.S. demands.

At the end of May, President Trump added a new threat to the equation – this time against Mexico. He warned the U.S. would levy duties of 5% on imports from Mexico, and potentially up to 25%, if Mexico did not take stronger action to stem the tide of illegal immigrants from Central America. This time, however, there was a strong backlash from investors, businesses and even Congressional Republicans, who worried the President had gone too far in using tariffs to solve a political issue.

These developments heightened worries about the global economy and the possible spill-over to the U.S. economy. Ten-year yields currently are around 2.1%, their lowest level since mid-2017, and about 115 basis points below the high of 3.25% reached last November.

The recent decline in yields reflects investors’ expectations that the Federal Reserve will need to lower interest rates to offset the impact of a slowing economy. The bond market, for example, currently is pricing in two 25 basis cuts in the Federal funds rate this year and two additional cuts next year. This move, together with an inversion of the front end of the Treasury yield curve ( Figure 2), suggest bond investors perceive the risk of recession has increased over this period. Equity investors, however, are more hopeful that Fed easing will extend the U.S. economic expansion, and the stock market has rallied from its recent lows. One of my main messages for investors has been they should downplay statements and tweets by President Trump, and focus instead on policy actions.1 The reason is that economic policies are what will ultimately impact the economy and, in turn, financial markets. Stated succinctly: Policies are the news, whereas tweets are mostly noise.

That said, I concede it is not always easy to separate statements and actions by the President. The reason: I believe Trump relishes being unpredictable, because he believes it confers an advantage in bargaining. Thus, there are times when he will make threats, and then back down; but there are also times when he will follow through on his threats. Unfortunately, this leaves investors and policymakers with the quandary of deciphering what he will do.

In this regard, the recent conflicts with China and Mexico are instructive. Both countries would be hurt if the U.S. imposed tariffs on them, as China is the largest exporter to the U.S. ($505 billion in 2018) while Mexico ranks second ($346 billion) just ahead of Canada. However, Mexico would feel the impact much more than China, because the U.S. market accounts for 80% of Mexico’s exports compared with 18% of China’s exports. Consequently, many observers believe the Mexican economy would slip into recession if the U.S. imposed tariffs on it.

Furthermore, because trade in goods between the U.S. and Mexico may cross the border multiple times for auto and machinery assembly, key sectors of the U.S. are likely to be adversely impacted. As a result, the U.S. stock market sold off markedly when President Trump threatened sanctions on Mexico, and there was also an outcry within the U.S. business community.

Beyond this, President Trump encountered considerable opposition from Congressional Republicans. Many were troubled that tariffs were being used to combat a political issue – illegal immigration. An added concern was that the U.S. government was about to vote on the new trade agreement between the US, Canada, and Mexico to replace NAFTA, and duties on Mexico could threaten its passage. Consequently, President Trump was under considerable pressure when he announced a deal had been reached with the Mexican government.

By comparison, the President does not face the same pressure with respect to China. Both Democrats and Republicans in Congress believe China has taken advantage of the World Trade Organization (WTO) and that it practices violations of intellectual property and technology transfer, while also subsidizing state owned enterprises (SOEs).  Accordingly, the main uncertainty now is whether President Trump will follow through on his threat to extend duties of 25% on an additional $300 billion of imports from China if President Xi Jinping does not meet with him at the G-20 summit on June 28-29.

Amid these developments, investors anticipate the Fed will respond to increased risks by easing monetary policy. For their part, Fed officials have tried to reassure investors they are monitoring how the U.S. and global economy could be affected by trade negotiations. At the same time, they do not want to appear to be reacting to pressure from President Trump.

Chair Powell, for example, issued the following statement on June 3, when markets were roiled by the threat of tariffs on Mexico:

A word about recent developments involving trade negotiations and other matters.  We do not know how or when these issues will be resolved. We are closely monitoring the implications of these developments for the U.S. economic outlook and, as always, we will act as appropriate to sustain the expansion, with a strong labor market and inflation near our symmetric 2 percent objective.

We interpret this to mean that the Fed is now more concerned about downside risks from a trade war, but it prefers to wait to see how the situation evolves before it acts. With core inflation below the Fed’s 2% target and inflation expectations declining, downside risks to growth make rate cuts more probable. However, the magnitude and timing will likely hinge on how the economy performs and whether an escalation in the trade conflict with China weakens the global economy.

At present, the pace of U.S. growth is moderating toward its former trend of 2%-2 ¼% after expanding by nearly 3% in 2018. The slowdown is most apparent in the manufacturing sector, which has felt the brunt of a slowdown in world trade, whereas the non-manufacturing sector has held up better (Figure 3). Jobs growth has also been solid, although it slowed in June, and wage increases have stayed moderate. Nor do we foresee a recession in the second half of this year, although a full blown trade war with China would increase the risks for 2020.

A lot hinges on how consumers and businesses respond to the increased uncertainty.  Thus far, consumer confidence has stayed strong, as households were partly shielded from the initial impact of tariff hikes on China. That said, the latest round and any subsequent rounds will have a greater impact on consumer goods. However, the main risk we foresee is that businesses will pare back capital spending plans, because the investment environment is too uncertain, especially now that the effects of corporate tax cuts are fading.

For the past year and one half, U.S. financial markets have mainly been driven by policy developments on the monetary and trade fronts. After tightening policy throughout 2018, the Fed paused at the beginning of this year when President Trump escalated the trade war with China and global equity markets plummeted. Today, in the wake of a further escalation in the conflict, risks to global growth are skewed to the downside, while the Fed is being pressured to ease monetary policy, which is increasingly likely in the second half of this year.

We believe the bond market is fairly valued now both in terms of duration and credit risks. In this context, the evolution of data and the policy responses – trade and monetary – will determine the performance of risk assets such as equities and lower-rated bonds.  While they have rallied of late, we believe caution is warranted.