Meet Our Family of Companies
Our site uses cookies to improve your visitor experience. By browsing our website, you agree to the use of cookies and agree to our privacy policy.
Do investors see the glass half full or half empty?  Equity investors are more optimistic while bond investors are more wary of the economic outlook as explained in our midyear outlook.
By Nick Sargen July 11, 2019
Markets
Share:

The second quarter proved to be an enigma for many investors, as the U.S. stock market fluctuated widely before going on to set a record high in June. The market sold off precipitously in May, when President Trump threatened to escalate the trade conflict with China and to impose duties on Mexico, but it then recovered when these threats were rescinded. Returns for the broad market, as measured by the S&P 500 Index, were 4.3% for the quarter and 18.5% for the first half of the year, the best showing since 1997 (Figure 1).

While equity investors see the glass as half full, bond investors are more wary of the economic outlook: Ten-year Treasury yields plummeted by nearly 60 basis points in the second quarter, and they have now fallen by 120 basis points from their highs in November. This mainly reflects a reduction in inflation expectations and concerns that a worldwide slowdown could spill over to the United States.

Some observers point to the current inversion of the U.S. yield curve as an indicator of a possible recession. However, the circumstances today are different than in the past when Fed tightening was a precursor to recessions. Considering how low interest rates are today – both in nominal and real terms – we do not believe Fed policy will spawn a recession.  If anything, indicators of financial market conditions suggest that overall stance is now accommodative. (Figure 2) 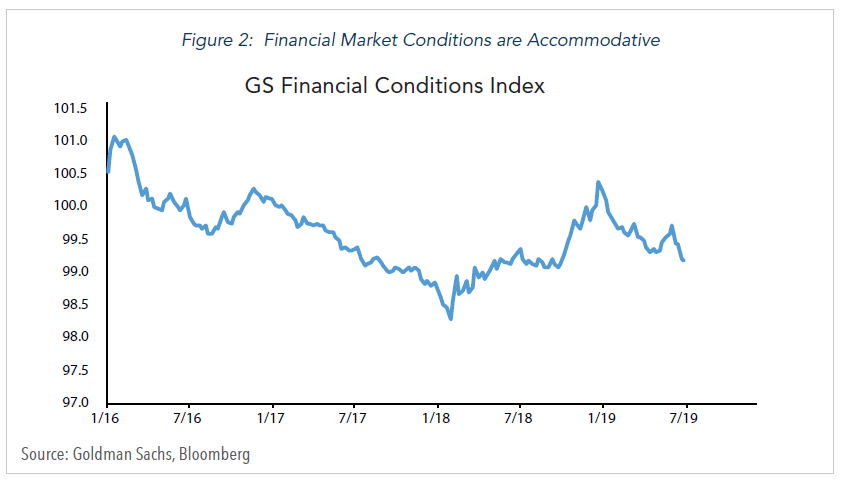 How Much Will the Fed Ease?

The bond market is pricing in more than two 25bps interest rate cuts by the Fed in the second half of this year, with an additional cut or two next year. Our view is the Fed is poised to ease policy at the FOMC meeting at the end of July, with inflation well below its 2% target. The most likely outcome is that it will lower rates by 25 basis points as insurance against a possible weakening of the economy. Subsequent policy easing will depend on whether U.S. growth moderates in response to the slowdown abroad.

In the event the Fed were to move more aggressively, it is not clear how effective interest rate cuts would be. With the banking system already flush with excess reserves, cuts in interest rates are not likely to result in increased credit creation.  Rather, the main channel through which monetary policy will most likely be transmitted in these circumstances is via the capital markets. As noted previously, the market response thus far has been very positive, but it remains to be seen whether this will translate into stepped up spending by businesses and households. In these circumstances, many investors are unsure whether to be optimistic or cautious about the outlook for the U.S. and global economy.

The Case for Optimism

The optimistic case is that the U.S. economic expansion, which is now the longest on record at ten years, is likely to continue as long as inflation stays low.

Most expansions end when increased inflation results in the Fed raising interest rates beyond levels that are sustainable. However, because the pace of activity in the current expansion has been below-par, both headline and core inflation are currently below the Fed’s 2% target. This has occurred even though labor market conditions have tightened with the unemployment rate dropping to the lowest in nearly 50 years.

One reason is the pool of labor has expanded more than expected. Labor force participation rates, which declined materially during the 2008 global financial crisis, have been rising gradually as discouraged workers have re-entered the labor force.  One consequence is that wage increases have been rising gradually, with average hourly earnings approaching 3.3% from 2.5% in 2017. Normally, this would have produced price pressures and/or squeezed profit margins. But this did not happen, because it has been accompanied by an improvement in labor productivity, which have kept unit labor costs flat.

It is unclear how long the improvement will last, as there are both cyclical and structural forces influencing productivity growth. Economists have been worrying for some time about the slowdown in business investment spending over the past decade. However, James Glassman of J.P. Morgan Chase observes that it masks a striking shift of business investment away from traditional investment in equipment and structures and into knowledge-intensive areas such as R&D and software development.1  When viewed in these terms, nonresidential business fixed investment has been relatively stable in relation to nominal GDP at nearly 13%.

Glassman also cites how successful U.S. workers have been in overcoming difficulties caused by severe housing speculation a decade ago. In the wake of the housing bubble, many economists assumed the speculative excesses would result in significant retrenchment by the household sector in order to increase saving and make good on underwater mortgages. However, the consensus assumption that the share of consumption would revert to levels in the 1950s and 1960s never happened.  In fact, the share of consumer spending has been maintained at about 68% of nominal GDP. (Figure 3)

Glassman concludes his assessment with the following observation: “The inflation dynamic may be the most important justification for anticipating that the economy now is on a path that will prove to be unprecedented, remaining fully employed for a lengthy period of time. It won’t be long before the idea of “The Great Moderation” surfaces, the idea that, with inflation low and under control, the evolution of the U.S. economic cycle ought to be more and more muted.” 2 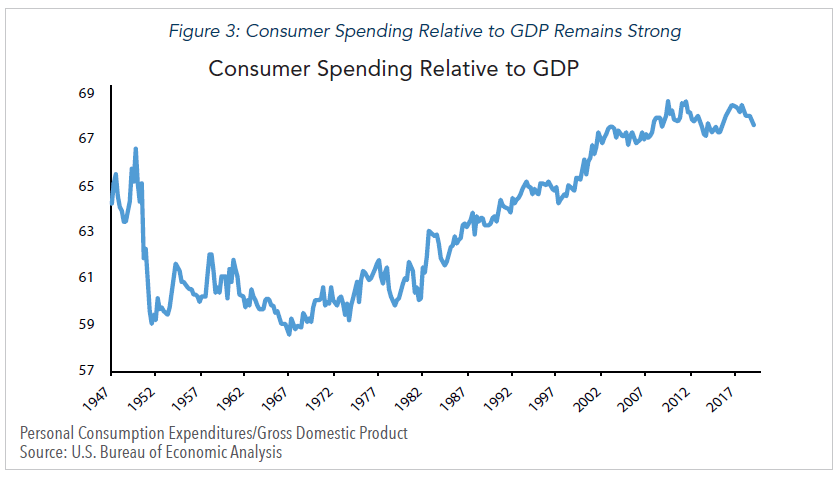 The Case for Caution

The main reason for caution is that while low inflation goes hand-in-hand with low interest rates, rapid credit expansion can contribute to asset bubbles that spawn deflation, or falling prices. In these circumstances, monetary policy easing may have only limited impact in reviving economic growth.

This predicament is evident today in the Euro-zone, where interest rates are below zero, economic growth is below the potential rate of 1.5%, and inflation is well below the ECB’s 2% target. Mario Draghi has indicated the European Central Bank (ECB) will consider taking action to bolster Europe’s flagging economy in coming months including lowering rates further and boosting asset purchases. Yet, bond yields in many European countries already are negative.  Consequently, it is hard to see how further monetary easing will revive growth when Europe is mainly being impacted by factors such as the global slump, trade tensions, and uncertainty about Brexit.

Japan’s economy has also slowed since mid-2018, mainly in response to China’s economic weakness and its impact on Asian economies and trade. As a result, growth has been running about 1% and inflation remains mired at 0.7%, well below the Bank of Japan’s (BOJ) 2% target. As a consequence of ongoing asset purchases, the BOJ now holds 45% of all outstanding government debt, and chronic high deficit spending has lifted government debt to 200% of GDP.3  The BOJ, moreover, is buying more than 100% of the government’s deficit spending, and it also holds a reported 75% of all outstanding ETFs on the Nikkei.4

China, by comparison, has flexibility both to lower interest rates and to pursue fiscal stimulus. However, the policy actions over the past year do not appear as potent as previous ones. During June, for example, China’s purchasing managers’ index slipped below 50, the lowest reading since January. Measures of exports, new orders, and jobs in manufacturing all declined.  This was primarily due to the escalation in the trade conflict with the U.S., in which duties of 25% were imposed on nearly half of the goods it ships to the U.S. in May.

While President Trump and Xi Jinping were able to reach a truce that forestalled duties being imposed on all imports from China, no resolution to the trade dispute is yet in sight.  In the meantime, world trade volume has continued to contract, and prospects for many Asian economies have deteriorated as factory activity shrank in most Asian countries in June. Moreover, export-oriented businesses must contend with ongoing uncertainty about how the trade dispute will play out. While factory output in the U.S. is still expanding, it has slowed steadily over the past year.

The strong showing of the U.S. stock market in the first half of this year mainly stems from an expansion in price-earnings multiples rather than underlying profit growth, which has been modest. For example, more than 90% of the rally in the S&P 500 Index has been driven by valuation expansion, with the forward P/E multiple rising from 14 times to 17 times. While lower interest rates have been the primary driver, the outlook for the economy and corporate profits has softened while uncertainty has increased globally.  Therefore, we believe the upside for the stock market is limited in the balance of this year.

By the same token, we do not foresee a recession on the horizon. Accordingly, we are maintaining our investment stance that favors high-quality names in equity portfolios. In bond portfolios, we are neutral on duration and are maintaining a moderate overweight in corporate credit.