Meet Our Family of Companies
Our site uses cookies to improve your visitor experience. By browsing our website, you agree to the use of cookies and agree to our privacy policy.
The coronavirus shock is different from previous ones. However, the four-step framework we use to analyze the shocks on markets is still relevant today.
By Nick Sargen March 17, 2020
Markets Economics
Share:

A Framework for Investing During Shocks

Over the past five decades, the global economy and financial markets have been buffeted by a series of shocks that have posed challenges for investors. The genesis was the breakdown of the Bretton Woods system of fixed exchange rates in the early 1970s that spawned high inflation. The list during the 1970s-1980s includes a series of currency crises and oil shocks, the developing country debt crisis in the early 1980s and the U.S. stock market crash in October 1987.

In the past three decades, by comparison, inflation was low but a series of asset bubbles ensued. The first bubble to burst was Japan’s stock market and real estate market in the early 1990s. It was followed by the Asian Financial Crisis and the tech bubble in the latter part of the decade and the U.S. housing bubble that culminated in the Global Financial Crisis (GFC).

My book Global Shocks presents a framework to assess how these shocks played out in financial markets.1  It entails investors following four steps:

This framework can also be used to analyze the coronavirus shock and its impact on financial markets even though the nature of the shock is different from previous ones.

Diagnosis of the Problem: An Evolving Pandemic

In analyzing a crisis, I begin by assessing the nature of the shock that disrupts financial markets. In some instances the contributing factors are straightforward and easy to identify: for example, the impact of oil price shocks or the bursting of Japan’s asset bubble and the U.S. technology bubble.

In other instances, perceptions of the problem may change over time. This was the case for the Asian Financial Crisis and the GFC. Both began as relatively small problems – a Thai currency crisis and a problem with subprime mortgages in the U.S.  However, they morphed and spread over time to become much larger ones.

The latter is true of the coronavirus shock, as well. It was first detected in Wuhan, China in December and eventually spread to other parts of the country. U.S. markets ignored these developments, even when the Chinese government quarantined parts of the country and migrant workers were not allowed to return to work. Many investors believed the impact would be limited outside China, comparing it to the outbreak of SARS in 2003.

U.S financial markets finally reacted in late February, and then with a flurry.  One trigger was the announcement by the Italian government of lock-downs in northern Italy and travel restrictions for about 100,000 people. Another was the February 26 announcement by CDC officials that a California patient was being treated for COVID-19, which the first U.S. case of unknown origin. February ended with a patient in the state of Washington becoming the first death in the United States.

Over the past week, markets were in near free fall amid news that a price war over oil had broken out amid a dispute between Saudi Arabia and Russia. This meant the global economy was being buffeted by simultaneous shocks for the first time. Since then, markets have been besieged by news that the World Health Organization has declared the coronavirus outbreak a global pandemic, and President Trump declared it a national emergency at the end of last week.

The realization that the outbreak is likely to worsen and lead to widespread economic disruptions has heightened worries among investors about prospects for the global economy. (Refer to my March 10th commentary, “Tipping Point for the Global Economy”.) Indeed, as travel is being restricted and major segments of economies are being shuttered, there is growing realization that the U.S. and global economy are entering recession. In the case of the U.S., the economy had been supported by strong consumer spending, but this is about to change.

Policy Response: Officials Must Get Ahead of the Curve

Once a crisis unfolds, the most important thing for investors to get right is the policy response. The key issues is whether policymakers know what to do to ameliorate the situation and whether they are empowered to act decisively. The steep market sell-off in recent weeks indicates policymakers are lagging, rather than leading markets on the healthcare front.

Over the past two decades, investors have become conditioned for the Federal Reserve and central banks to ease monetary policies aggressively to contain the fallout of crises. Thus far, however, interest rate cuts have been less effective, even as the Fed has lowered rates to zero. The main reason is they cannot counter the direct effects of a pandemic.

This does not mean central banks should do nothing. The Fed’s goal in providing liquidity to markets and in announcing a $700 billion program of purchases of treasuries and mortgage backed securities is to provide  safeguards for the financial system as economic conditions deteriorate.

In the meantime, attention has turned to fiscal policy. It can be used to target segments of the economy that are being impacted by the virus. President Trump’s emergency declaration is estimated to free up $50 billion for states and localities to cope with the outbreak. The House of Representatives subsequently passed a bill that would allow for two weeks of paid sick leave for about one-fifth of the workforce and up to three months of family and medical leave for those affected by the crisis. The bill also provides tax credits to help small-and medium-size businesses, but it does not include a payroll tax cut that President Trump is seeking.

While markets rallied at the end of last week on these developments, they plummeted at the start of this week. The main reason is the U.S. government has been slow to roll out widespread testing of coronavirus. Medical experts are concerned the delay will result in a significant increase in cases that could overwhelm the capacity of the U.S. healthcare system. Consequently, the U.S. government now confronts the realization that it must shut down large segments of the economy to lessen the spread.

One of the core tenets of investing is market participants must assess what information is priced into markets and then ascertain whether or not they concur. While this applies throughout market cycles, what really matters when markets are not functioning normally is getting the big picture right.

Prior to the markets’ selloff, the U.S. stock market did not appear to be a bubble. However, valuations were stretched with several metrics near the highest levels in two decades. When the Fed eased policy last year and a trade deal was reached between the U.S. and China, investors believed the global economy was on the mend and there was clear sailing ahead.

These expectations have been shattered by recent developments. As the economy rolls over, Wall Street analysts are just beginning to reduce profit forecasts for this year. The outcome is likely to be a significant decline in profits this year after flat profits last year.

Beyond this, it is difficult to discern what is being priced into markets, especially with stock market volatility as measured by the VIX index rivaling the 2008 financial crisis (Figure 1). The huge daily gyrations do not reflect changes in underlying fundamentals or even investors’ perceptions of them. Rather, price movements have been magnified by the prevalence of algorithmic, computer-based trading that bears similarities with “portfolio insurance” that contributed to the October 1987 crash. 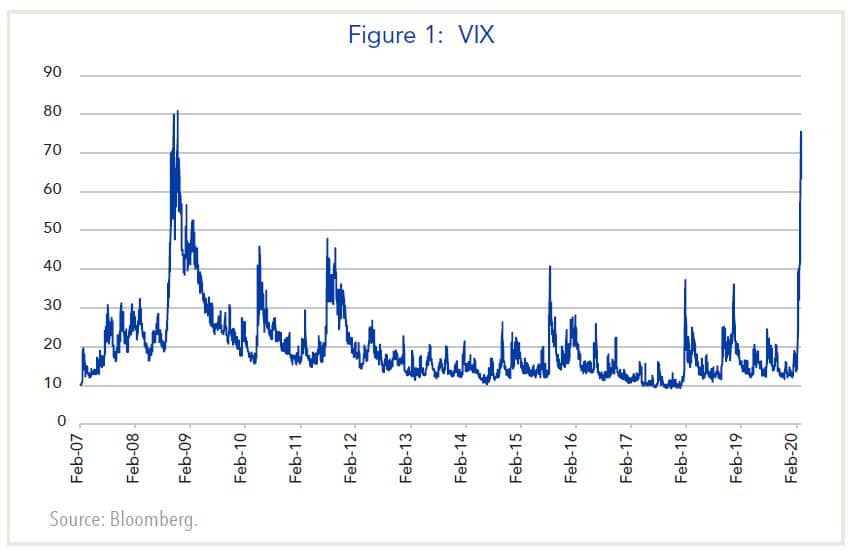 Recognizing this, my assessment is the stock market went from being expensive to cheap in a matter of weeks. Normally, this should lure value-oriented portfolio managers back into the market. However, many investors prefer to stay on the sidelines until they are confident the worst is past.

One of the main challenges in managing money during crises is portfolio diversification may not offer adequate protection just when it is needed the most. The reason: Correlations among asset classes gravitate to one, as corporate stocks and bonds sell off while risk-free assets such as cash, Treasuries, and gold rally. This is what has happened over the past four weeks (Figure 2). Unfortunately, the sell-off in risk assets was so swift that most investors could not protect themselves.

What Strategies Can Investors Pursue That Could Help Protect Themselves?

A common approach is a barbell strategy, in which investors hold larger-than-normal positions in safe assets to ride out the storm. However, while this approach can dampen overall portfolio volatility, it also runs the risk that investors will underperform once risk assets recover.

One of the main findings from my book is that investors who suffer during a market downturn typically get a second chance to recoup their losses when markets rebound. This was especially true after the worst of the 2008 financial crisis, when the stock market rallied for eleven years until the bull run ended last week.

Because it is inherently difficult to time markets, an appropriate strategy for many investors is to stay close to their long-term strategic asset allocations and ride out the storm. One comfort in these scary times is the impact of the coronavirus is likely temporary rather than permanent. Indeed, the worst of the crisis already is past in China and South Korea, mainly because they took strong measures to contain it. While the worst is likely ahead for the U.S., efforts now underway to contain the spread of coronavirus hopefully will pay off later this year.