Meet Our Family of Companies
Our site uses cookies to improve your visitor experience. By browsing our website, you agree to the use of cookies and agree to our privacy policy.
The May jobs report surprised many investors who were prepared for a large increase in the jobless rate. While the news was a relief to the Federal Reserve, the numbers underestimate the full impact of COVID-19 on labor. Even though the U.S. stock market is back to levels before the pandemic, the path to recovery is still unclear.
By Nick Sargen June 11, 2020
Markets Economics
Share:

Significance of the May Jobs Report

The May jobs report surprised most investors who were prepared for a large increase in the number of unemployed and a jobless rate close to 20%. Instead, the report showed a net increase in nonfarm payrolls of 2.5 million and a decline in the unemployment rate to 13.3% from 14.7% in April.

Investors greeted the news as indicating economic recovery has begun, and we concur with this assessment. The increase in jobs is linked to the re-opening of businesses, which enabled furloughed workers to return to work. The biggest gains were in hard-hit areas such as food and beverage, leisure, and hospitality. It suggests the Paycheck Protection Program (PPP) launched through the auspices of the Small Business Administration is working as intended.1

The results were surprising, nonetheless, because weekly data on initial jobless claims showed steady increases throughout May. However, because comparable data on those returning to work are not reported, it was difficult to gauge the net result.

The headline unemployment figure of 13.3% understates the impact of COVID-19 on labor. A note by the Bureau of Labor Statistics flagged that a “misclassification error” had occurred that would boost the jobless rate by about 3 percentage points higher to 16.3%. Moreover, the headline rate does not include part time workers who are seeking full time jobs. Including this group, those unemployed and/or underemployed would exceed 20%.

Because the shutdown of the economy is unprecedented, it probably affected the collection/sampling process in both the employment and household surveys. Therefore, revisions could be significant as more complete data are collected.

The bottom line is the May jobs report is viewed positively by investors, because it indicates recovery began a month earlier than had been expected. It also suggests that government-sponsored programs such as the CARES Act and PPP are keeping businesses and households afloat until the economy is fully reopened.

Assessing the Path of Recovery

The jobs report, however, still leaves open the debate about the shape of the recovery.

Equity investors are banking on a quick improvement on grounds that the reopening is in its early phase and the impact of federal programs is just beginning. For example, consumer spending plummeted by a record 17.2% in April, as people choose to save a portion of the income transfers they received from the federal government. As a result, the personal saving rate soared to 33%, which leaves them with ample spending power.

The PPP program was also being launched in April, and it was not until May that sizable loan distributions were made. Jim Glassman of JPMorgan Chase contends that “no one who works for a small business should be unemployed, because the $659 billion allocated to the PPP program ought to be able to cover almost 57 million people.”2 In his view, the economic recovery from sheltering-in-place guidelines is likely to follow the v-shaped path of a natural disaster.

Most economists, however, believe recovery will be gradual and uneven following an initial bounce. Prior to the report, estimates for second quarter real GDP ranged between annualized declines of 30% to 40%, with those for the third quarter called for an annualized increase of 20% to 30%. The pace of recovery is expected to moderate thereafter as many furloughed workers will have returned to their jobs.

One indicator of how far there is to go is the labor force participation rate that divides the number of people in the labor force by the number of people eligible to work (Figure 1). It shows a steep decline from 63% at the beginning of this year to just over 60% in April, which could take several years to reverse. Another metric, the ratio of U.S. workers employed to the population, plunged by 9 percentage points in April and was only marginally higher in May. 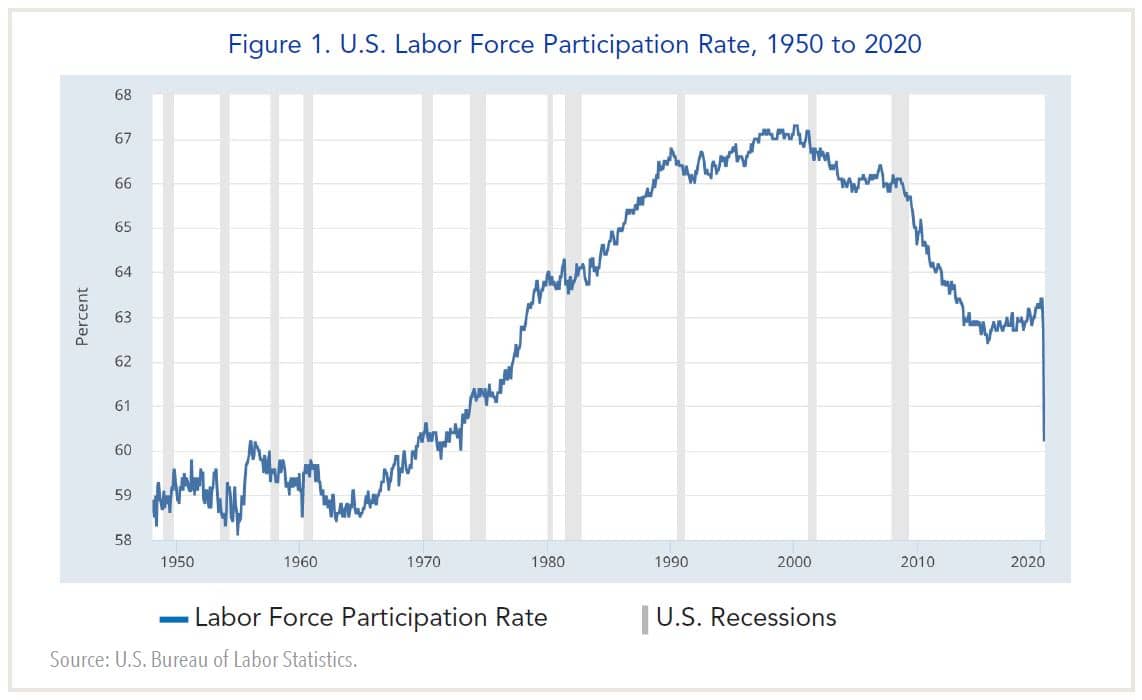 Meanwhile, Congress is debating the need for additional federal support. Democrats have proposed a new spending package totaling $3 trillion, but Republicans maintain it is preferable to wait and see how the programs already enacted are impacting the economy. The May jobs report, therefore, could delay or preclude additional support.

For its part, the Federal Reserve has been cautious about recovery, partly because it is uncertain whether there will be another wave of COVID-19 later this year or next. Jerome Powell has indicated it may take until the end of 2021 for the economy to get back to its pre-crisis level.

With recovery now underway and inflation not an immediate issue, we expect the Fed to slow the expansion of its balance sheet and keep short-term interest rates close to zero into near year. Fed officials also have been discussing contingency plans should the economy falter. One possibility is to implement so-called “yield curve control,” in which the Fed would signal it is prepared to keep short-term rates close to zero for a specified period or for as long as the economy remained weak.

Meanwhile, 10-year Treasury yields rose this past week by about 25 basis points to 0.9%, while the yield on the long bond surpassed 1.65%, about 45 basis points above its level in mid-April. Barring further economic surprises, we do not foresee significant further increases ahead.

Prior to the jobs report, many investors worried the stock market had advanced too far and too fast considering the very weak economic readings. Now there is at least some validation the economy is about to improve. However, we foresee two key hurdles ahead.
The first is the extent to which corporate profits will improve. Earnings per share for S&P 500 companies were stagnant last year, and they posted a 50% decline in the first quarter of this year. The consensus estimates of Wall Street analysts call for profits to fully recover by the end of 2021 (Figure 2). Even then, it will mean that S&P 500 EPS will only be back to their levels at the beginning of 2019, implying three years of no profit growth.
A second risk is the possibility that a Democratic sweep in the 2020 elections could result in a reversal of the Tax Cuts and Jobs Act (TCJA) that was passed at the end of 2017. According to David Kostin of Goldman Sachs, a reversal of the TCJA would reduce Goldman’s S&P 500 EPS estimate by 12% from $170 to $150.3 In his view, “extreme uncertainty helps explain why the performance of tax-sensitive stocks has not fully reflected the tightening election race.”  With most polls showing Trump trailing Biden and the Republican majority in the Senate in play, the 2020 elections will become a focal point for the markets when the campaign season is in full swing after Labor Day. 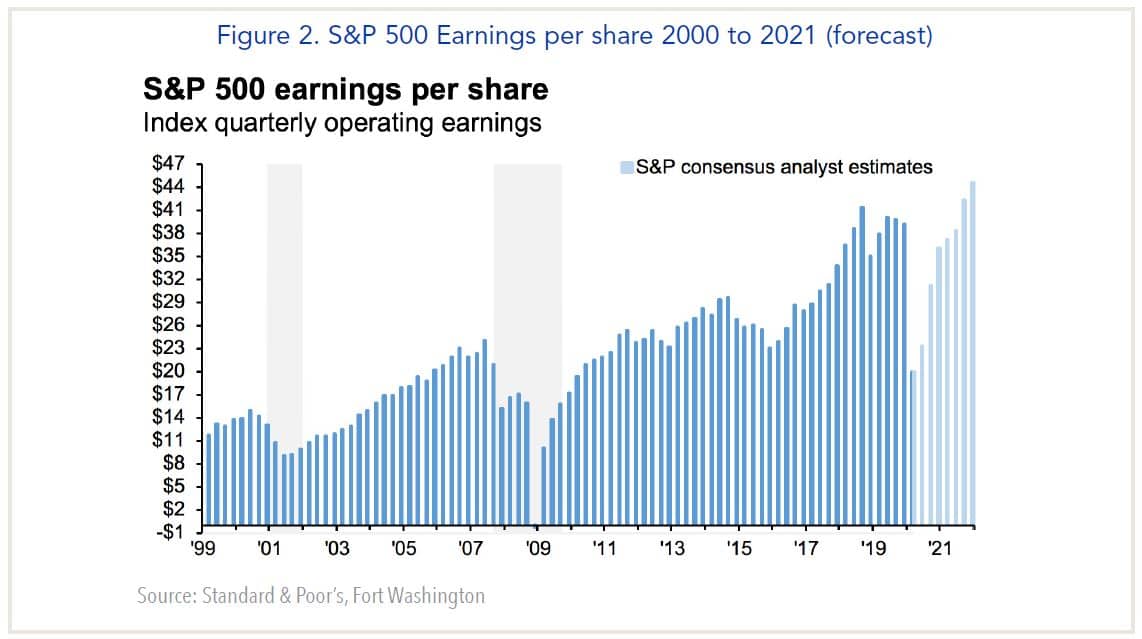