Meet Our Family of Companies
Our site uses cookies to improve your visitor experience. By browsing our website, you agree to the use of cookies and agree to our privacy policy.
One of the main objectives of the incoming administration is to counter growing income inequality in America. However, investors are likely to judge the Biden administration’s policies primarily by how they impact the U.S. economy overall.
By Nick Sargen December 30, 2020
Economics Policy
Share:

With President-elect Biden’s inauguration less than one month away, investors increasingly will focus on the economic policies his administration will pursue and their chances for being enacted in a highly-partisan Congress.

What is clear at the outset is the priorities of the Biden administration are very different the Trump administration’s. The over-riding goal of President Trump was to restore U.S. economic growth of more than 3% per annum and lost jobs in manufacturing. For Biden, the main objective is to counter growing income inequality in America and a hollowing out of the middle class.

The key issue is what can be done to redress the declining share of U.S. labor’s income to GDP that has become pronounced over the last two decades (Figure 1 below). Two forces – globalization and a lack of educational skills required for rapid technological change - have contributed to the problem by limiting wage increases, especially for less-skilled workers. But it is challenging to identify policies that can lessen the disparities without reducing overall economic growth. 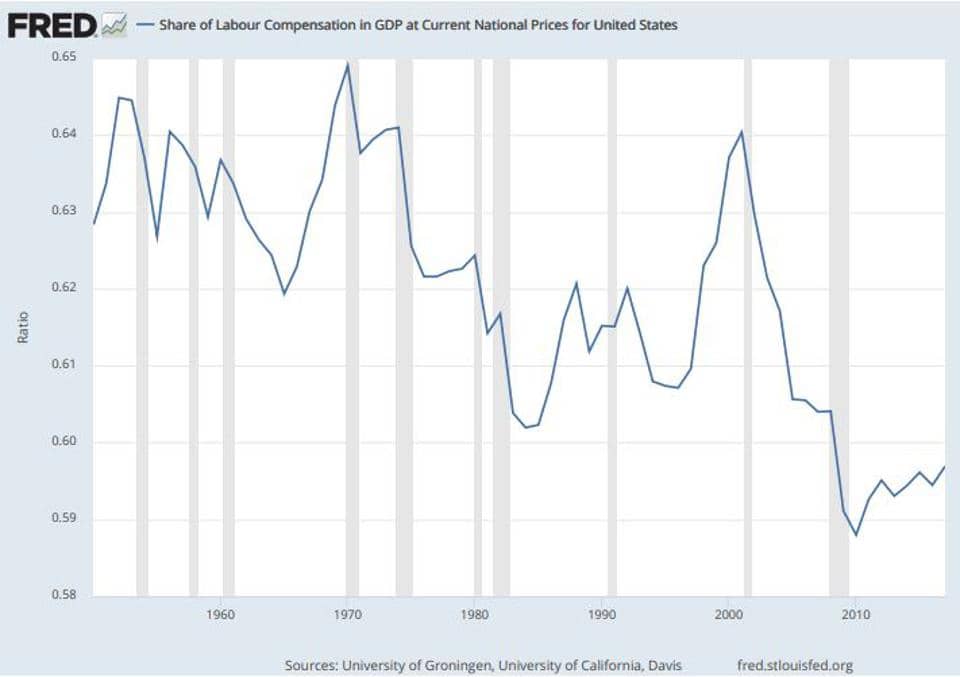 The economic plan Joe Biden unveiled during the 2020 election campaign featured a pro-growth, progressive tax code to finance a $5.4 trillion expansion in federal spending over the coming decade. The list of proposed tax changes for the wealthy included the following:

Other proposals included lessening the burden of student debt and streamlining the process of bankruptcies.

Biden’s plan also called for increasing workers’ rights by raising the minimum wage to $15 per hour and granting workers more bargaining power with businesses. It included a $700 billion plan to boost U.S. manufacturing that involves $400 billion of government spending on U.S. goods and services and a $300 billion investment in R&D on technologies for electric vehicles, lightweight materials, 5G, and artificial intelligence.

Earlier this month, Biden announced the economic team that would implement his policies. It includes Janet Yellen as Treasury Secretary and others who are former members of the Clinton and Obama administrations, rather than candidates from the progressive wing of the Democrats.

At their unveiling, Biden stated that economic recovery would be the administration’s top priority during the first 100 days in office. The passage of the COVID-19 relief bill addressed some of the most pressing needs. They include extending unemployment relief until mid-March, granting $600 support payments to eligible individuals and augmenting the Paycheck Protection Program (PPP).

Biden has made it clear he considers the bill to be a “down payment” on what is ultimately required to bolster the economy. However, a lot is riding on the outcome of the two Georgia Senate elections on January 5. Should Republicans keep control of the Senate, the Biden administration will be hard pressed to get through its ambitious fiscal program.

If the Democrats gain control of the Senate, Biden and the Democrat leadership are likely to press for increased government spending to bolster the economy. Press reports indicate that Democrats are laying the groundwork for an infrastructure bill early next year.  Democrats may be able to strike a deal with Republicans even if government is divided: Senator McConnell reportedly has left the door open for the Democrats to secure added funds for state and local governments in exchange for COVID-19 liability protections for businesses.

Plans to boost personal and corporate taxes may be delayed, however, for two reasons.  First, they run counter to the Biden administration’s efforts to bolster the economy.  Second, they are likely to encounter strong resistance not only from Republicans but also from moderate Democrats.

By comparison, there is little clarity about the attempt to redress income inequality by other means including hiking the minimum wage, encouraging greater unionization of workers and fostering a “Buy America” program. To be successful, these programs must counter the forces of globalization and technological change mentioned earlier.

Arguments that greater unionization is needed to restore the bargaining power that labor lost over the past two decades, for example, overlook that a key factor contributing to it is increased competition from abroad, especially from China. One area, therefore, where the Biden administration may be willing to leave policies unchanged relate to the increase in tariffs that President Trump imposed on imports from China. By doing so, it would lessen competitive pressures U.S. workers confront.

At the same time, the Biden administration is likely to dial down the rhetoric with China so it is less confrontational, while also restoring relations with America’s traditional trading partners. In this regard, the main difference from Trump’s trade policy is that Biden views international trade as a way to bolster global growth rather than as a zero sum game.

In the end, investors are likely to judge the Biden administration’s policies primarily by how they impact the U.S. economy overall, rather than by whether they succeed in reversing the trend in labor income. Still, should Biden’s policies prove successful in this regard, it would likely resonate favorably with the U.S. electorate four years from now.

A version of this article was posted to Forbes.com on December 23, 2020.

The COVID Relief Bill: Why Compromise Is Back in Washington, D.C.

Why Markets Seem Immune From Politics

Replay of the "Election Reflection" Webinar