Meet Our Family of Companies
Our site uses cookies to improve your visitor experience. By browsing our website, you agree to the use of cookies and agree to our privacy policy.
Given the number of variables in the global economy, there is enormous uncertainty and biases in these forecasts and recognize them as not much more than glorified guesses.
Casey Basil March 6, 2018
Fixed Income
Share:

It's tough to make predictions, especially about the future.
~Yogi Berra

It’s that time of year when those in the finance world make (and others read) predictions regarding the capital markets for the upcoming year. Macroeconomic factors such as GDP, interest rates, stock markets, commodity prices, and of course one thing that impacts all markets – the credit cycle – are expounded upon ad nauseam. Are we in the 6th inning of the credit cycle? The 8th? Extra innings? Is it even possible to know?

Consistently predicting credit cycle turns and other macro-economic data is a challenging exercise. Stories over the last few years of hedge fund managers being carried out on gurneys for errant macro calls are abundant. As long-only managers, there is no doubt that an understanding of growth expectations and an awareness of various dynamics at play in the markets are important when allocating capital among asset classes. We believe that a disciplined capital allocation strategy paired with a rigorous and repeatable investment process that manages risk throughout the cycle is meaningfully more important for generating long-term returns than consistently trying to make accurate macro-economic calls.

People like stories. We like our world to be predictable and explainable. It has always been this way whether humans have used stories of Zeus and Athena to explain their world, heeded the wise words of shamans, interpreted the entrails of animals, or read the minutes of a Federal Reserve meeting. Almost all daily moves in stock prices are noise, yet business news anchors will begin every evening’s news segment with “Stocks dropped today because…” or “Interest rates rose on news of…”.  That is rarely the case, yet we are comforted by this false narrative, and in this yearning towards certainty we find ourselves pulled toward “expert” opinion. I think we should resist this inclination.

Why? Because the historical record of forecasts in finance is abysmal. Let’s consider a few examples from the recent past:

In 2012, Wall Street commodity strategists were asked for their 3-year ahead forecast for Brent oil price. Goldman Sachs compiled all the forecasts. These forecasts consisted of detailed analysis of oil fundamentals, geopolitical scenarios, and utilized sophisticated modeling. Most predictions called for oil to be over $100 a barrel (bbl) with the majority of forecasts in the $110-$135/bbl range. How did those predictions fare?  Fast-forward three years, in 2015, and we find that Brent oil averaged a measly $53.60/bbl (and got below $40/bbl), less than ½ of most predictions, as U.S. shale production expanded and helped lead to a global oil inventory glut.

More PhD brain power probably goes into predicting interest rates than any other economic activity in the world. However, I am not aware if there’s been an economic forecast since the Great Recession that has been more consensus – and more wrong – than that of forecasting higher rates.  The graph below is almost comedic in its errors: 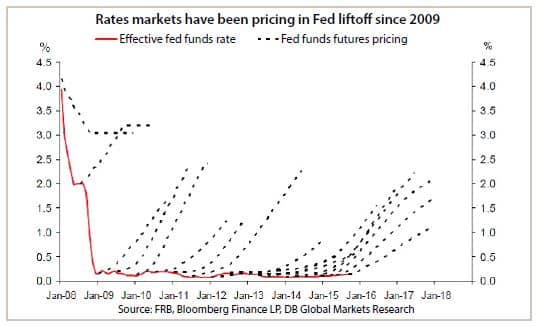 As the lines show, actual rates (red line) rarely followed the forecasts (black lines). In fact, at nearly every point in time over the past decade, economic experts have forecasted much higher rates, a prediction that has not come to pass. This trend continues to this day.

Nations typically got into fiscal trouble when debt/GDP got above 100%, until Japan went north of 200% without major problems and created the “widowmaker” trade for investors.1  An article from Business Insider in 2012 highlighted that sophisticated investors are re-upping that trade.2  With the Japanese 10-year yield below 1.00% at that time, it might have seemed like a no-brainer…until yields went negative a few years later.

Alan Greenspan made his famous “Irrational Exuberance” speech in December of 1996, noting his concern for potentially overvalued asset prices.3  Many Fed governors noted similar fears, and many smart investors agreed. Markets around the world temporarily sold off in the wake of those comments.  But what it actually marked was the middle of that cycle, as the S&P 500 would rise 90% over the next 3 years and the NASDAQ would ultimately rise 300% further before crashing.

Ben Bernanke and the Federal Reserve noted that U.S. home prices had never declined before, and implied they never would.  He proclaimed optimism on the housing market and economy well into 2007, the dawn of the most vicious financial crisis since the Great Depression.4  In October of 2007, the New York Federal Reserve officially predicted 2008 GDP growth of 2.6%. The Great Recession would officially start two months later.

Erroneous predictions are not just limited to the economy and markets:

If these predictions serve one purpose, it is that perhaps we are able to see where consensus opinion lies, and we may be able to find good relative value going elsewhere. In chess, consider that just three moves into a match there are 9 million potential outcomes for three additional moves ahead. Four moves ahead there are billions of potential outcomes. Given the number of variables in the global economy, we must acknowledge the enormous uncertainty and biases in these forecasts and recognize them as not much more than glorified guesses.

All that is a long way of saying we should not base our investment decisions primarily on our predictions for interest rates, how many times we think the Federal Reserve will hike, where we think certain commodity prices will be, or when we believe the credit cycle may end. It’s a more appropriate exercise to develop a consistent capital allocation philosophy and then execute on a sound, repeatable investment process based on an understanding of the ever-changing risk-return relationship offered within the capital markets.

Continue reading about how investors consider the corporate credit cycle and why predicting credit cycle turns is a challenging exercise.

This publication contains the current opinion of Fort Washington Investment Advisors, Inc. Such opinions are subject to change without notice. Unexpected events may occur and there can be no assurance that developments will transpire as forecast. This publication has been distributed for informational purposes only and should not be considered as investment advice or a recommendation of any particular security, strategy, or investment product. Information and statistics contained herein have been obtained from sources believed to be reliable but are not guaranteed to be accurate or complete. The views in articles cited do not necessarily represent the views of Fort Washington. No part of this publication may be reproduced in any form, or referred to in any other publication, without express written permission of Fort Washington Investment Advisors, Inc.

Casey Basil is an Assistant Vice President and Senior Credit Analyst focusing on high yield fixed income securities. He received a BS from Indiana University and an MBA from the University of Michigan.

Emerging Markets: Looking for Opportunity Beyond the Headlines

Waves of Impact From Harvey & Irma

A Look at the Credit Cycle