Meet Our Family of Companies
Our site uses cookies to improve your visitor experience. By browsing our website, you agree to the use of cookies and agree to our privacy policy.
Over the past year, the Fed has raised short-term rates from 1% to 2% which has had a negative effect on the entire fixed income spectrum. This has been especially true within EM.
By Brian Cloutier, Bojan Vidosevic July 18, 2018
Fixed Income
Share:

Mounting risks facing emerging markets have dominated recent financial headlines. On the country level, busy election calendars have heightened uncertainty in faraway places from Brazil and Mexico to Pakistan and Turkey. On a global level, trade tensions are rising between the U.S. and major trade partners and on the monetary side of particular concern has been Fed policy normalization after a decade of quantitative easing and suppressed interest rates. It is undeniable that a hawkish Fed poses headwinds for fixed income assets, particularly in emerging markets where higher U.S. interest rates and a stronger dollar contribute to tightening financial conditions. In the market’s crosshairs are countries that became accustomed to the easy borrowing conditions provided by accommodative global financial conditions and allowed external and fiscal imbalances to grow. However, the recent selloff has also impacted countries that are less susceptible to Fed normalization, presenting opportunities for active managers.

Some countries — such as Turkey — are particularly vulnerable to Fed tightening, despite the relative health of fiscal accounts. In addition to a stubbornly high current account deficit, Turkish private sector debt held by non-residents has surpassed $300 billion, giving the country one of the highest ratios of private sector external debt–to–GDP in the developing world.1 This leaves the economy exposed to an appreciating U.S. dollar since foreign currency liabilities are not fully matched with hard currency assets and revenues. Additionally, recent uncertainty surrounding parliamentary and presidential elections has further exacerbated the situation in Turkey.

Argentina has also presented a challenging situation. The country quickly became a market favorite as the Macri administration pivoted toward more sustainable economic development. However, substantial twin deficits, rising debt, and a high reliance on foreign funding has made Argentina vulnerable to Fed normalization and tighter global financial conditions.

Driven by idiosyncratic concerns in countries such as Turkey and Argentina, the market has painted all of EM hard currency-sovereign debt with the same broad brush during the recent bout of volatility. The indiscriminate selling during the current period becomes evident when compared to the 2013 taper tantrum episode as shown in Table 1.2,3 For the majority of countries (52%), the percentage change in country risk premium, as defined by the J.P. Morgan Emerging Market Bond Index Global Diversified (EMBIG-D) spread, increased relatively uniformly from 30% to 60% during the most recent selloff; whereas, during the taper tantrum episode, the market was more discerning, with only 38% of countries exhibiting spread widening in the 30% to 60% range, as the chart below indicates. 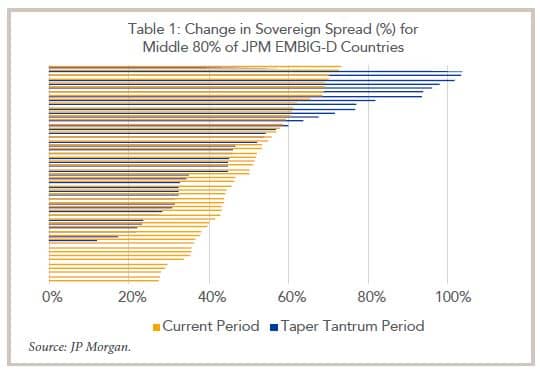 The uniformity of the recent selloff presents opportunities for active managers, as not all countries are equally susceptible to the perceived risks. Current valuations are more compelling, with the JPM EMBIG-D spread having backed up into the 69th percentile over the preceding 15-year period.4 For comparison, current BBB rated U.S. Industrial spreads are in the 41st percentile and U.S. HY is in the 17th percentile over the same 15-year time span.5

One area of opportunity is the subset of oil exporters with strong external balances. Two countries — Russia and Kazakhstan — saw their JPM EMBIG-D country spread widen 53% and 50%, respectively, from the tights on 2/1/2018 to 6/25/2018, compared to a 39% widening for the index as a whole.6 Some recent concerns — U.S. dollar strength, and inflation — should end up a positive for countries such as these.

A period of inflationary expansion should be supportive of global commodity prices. Since oil is transacted in U.S. dollars, exporters are paid in appreciating dollars while their costs are largely denominated in depreciating local currencies. In addition, a number of countries like Kazakhstan and Azerbaijan have managed to turn their commodity windfalls into sizeable nest eggs in the form of sovereign wealth funds, providing them with a cushion during periods of adverse market conditions.

From a policy perspective, these countries are less vulnerable, since, in many cases, the 2014 oil price crash forced tough macroeconomic adjustments and instilled fiscal discipline. To highlight the impact, a number of countries have until now set their fiscal budgets based on conservative oil price assumptions of $40 to $45 per barrel despite West Texas Intermediate (WTI) prices having generally traded above that range since the first quarter of 2016.7 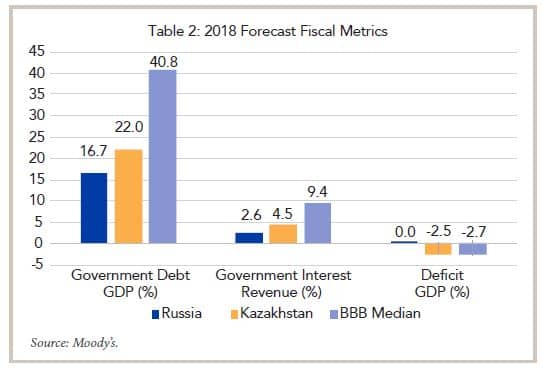 The aforementioned countries of Kazakhstan and Russia are of particular interest, since both have strong external and fiscal metrics, as Table 2 depicts. Government debt-to-GDP ratios for Russia and Kazakhstan are among the lowest of all sovereigns, and debt affordability compares favorably to BBB rated peers. Russia maintains a consistent current account surplus, and the budget is expected to be largely balanced by 2018. Kazakhstan holds $59 billion of assets in the National Oil Fund, equivalent to 37% of GDP, and twice the size of outstanding government debt.8 While geopolitics are a concern with Russia, the risk of sanctions being extended to the sovereign is perceived to be low as the U.S. Treasury has explicitly advised against such action, citing negative spillover effects on global financial markets.

Another country of interest is Angola, a credit that does not exactly fit the mold of having strong external balances. However, it does possess several favorable attributes when considered on a relative value basis to other high beta credits. Under the new leadership of President Joao Lourenco since September 2017, Angola has shifted on key policy points and has embarked on a path of reducing external vulnerabilities, fiscal adjustment, cleaning up arrears at the national oil company, and improving the business climate.

A challenge for Angola, though, is a high government debt burden, which stands above 70% of GDP.9 Of this, a very high share — 76% — is either linked to or denominated in hard currency.10 While such a high external debt burden is problematic, a closer examination reveals a manageable Eurobond debt profile, which represents less than 7% of total government debt with no sizeable maturities until 2025. Additionally, government fiscal reserves of approximately 10% of GDP can provide a buffer to help smooth any temporary funding issues. Outside of the Eurobonds, approximately 15% of total government debt is local debt denominated in or linked to the U.S. dollar.11 Authorities are working to convert this debt into more stable local currency denominated debt as it comes due.

Angola was China’s third largest oil supplier in 2017, and a large part of the remaining external debt is in the form of bilateral loans from China.12 Given the strategic importance of Angola as a top oil supplier to China, it is likely that Chinese authorities will be accommodative in extending maturities on loans coming due, making these obligations more concessional in nature and less exposed to refinancing risk. With 95% of export earnings being derived from petroleum, continued oil strength should provide a tailwind for Angola’s reform effort as the country moves to improve external imbalances.13

Brazil stands out as another example that has featured prominently in the market’s crosshairs. Brazil’s challenges are largely domestic, stemming from political uncertainty leading up to the October 2018 election, a high government debt burden at 74% of GDP, and rising social spending that needs to be addressed.14 Relative to the U.S. dollar, the currency has weakened substantially in the second quarter. Given these political and fiscal risks, it can be difficult to get excited about the sovereign sector within Brazil. However, while the government is highly levered, the corporate sector in Brazil offers opportunities in industries such as pulp and paper, aviation, and chemicals. Select corporates in Brazil can provide a hedge to a weakening local currency as they are global leaders in their sectors with export earnings largely in U.S. dollars. 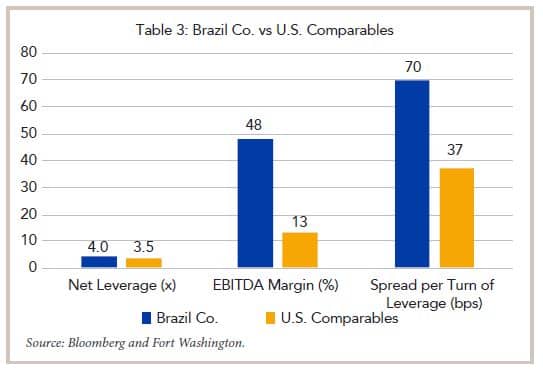 Take for example, an investment grade paper pulp company. As both the world’s largest and lowest cost hardwood pulp producer, the company has a substantial competitive advantage over its peers. Since about 85% of its revenue is generated outside Brazil and the majority of costs are denominated in local currency, a weaker Brazilian real leads to improved financial performance. Its leverage remains in-line with global peers, and higher margins lead to substantially better cash flow generation as depicted in Table 3. Despite these size and margin advantages, in the intermediate part of the curve, this company’s bonds — which already offered a substantial yield advantage versus developed market peers — have widened over 100bps to U.S. Treasuries (which is in-line with Brazil sovereign bonds), compared to only 40bps to 50bps widening for comparable U.S. bonds.15

The recent sell-off in emerging markets is grounded in a host of concerns including tightening financial conditions in these markets due to a stronger dollar and less accommodative monetary policy in the United States, slowing global growth, and the heightened risk of escalating trade disputes. However, just as there are idiosyncratic negative developments in specific countries contributing to their weakness, there are opportunities flashing in the market as the selloff envelopes the good with the bad. 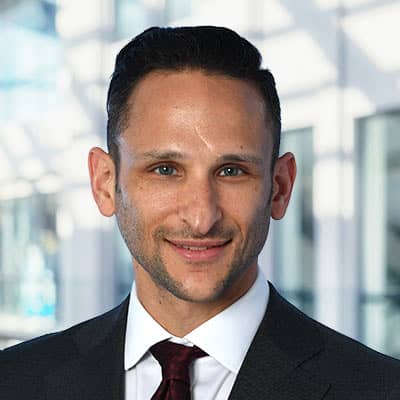 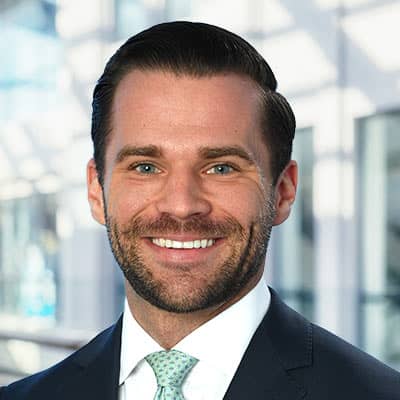 Credit Analyst
Bojan is a Credit Analyst with the Emerging Markets Debt strategy. He received a BS from Miami University with a double major in economics and decision science. He is a CFA charterholder.

A Look at the Credit Cycle

The Follies of Forecasting

Waves of Impact From Harvey & Irma