Meet Our Family of Companies
Our site uses cookies to improve your visitor experience. By browsing our website, you agree to the use of cookies and agree to our privacy policy.
Several factors—including elevated inflation and Russia’s invasion of Ukraine—have the potential to impact the strength of the U.S. economy in the coming year.
By Nick Sargen April 13, 2022
Economics Markets
Share:

Financial markets turned volatile in the first quarter of this year amid growing concerns about inflation, after seven quarters in which the U.S. stock market generated record gains (see Figure 1). Treasury and corporate bond yields rose by almost a full percentage point during the quarter, and the Bloomberg Aggregate bond index posted a return of minus 6%, the biggest quarterly loss since 1980.
Stocks fluctuated considerably, falling into correction territory in February when Russia invaded Ukraine and oil prices surged to $130 per barrel. Equities then rallied in March as the conflict reached a standstill, and oil prices ended the quarter near $100 per barrel. For the quarter, the S&P 500 posted a negative return of 4.6% while the tech-laden Nasdaq Composite Index lost 8.9%.

Source: Bloomberg. For informational purposes only. Frank Russell Company (FRC) is the source and owner of the Russell Index data contained or reflected in this material and all trademarks and copyrights related thereto. The presentation may contain confidential information pertaining to FRC and unauthorized use, disclosure, copying, dissemination, or redistribution is strictly prohibited. This is a Fort Washington Investment Advisors, Inc. presentation of the Russell Index data. Frank Russell Company is not responsible for the formatting or configuration of this material or for any inaccuracy in Fort Washington’s presentation thereof. You cannot invest directly in an index.

The key factor impacting markets has been a change in expectations about policy tightening by the Federal Reserve. At the beginning of this year, investors were expecting the Fed to begin raising rates by June and then make two quarter point hikes in the second half. Now, with Fed officials expressing greater concern about bringing inflation under control, investors are pricing in a federal funds rate of about 2% by the end of this year and 3% by the end of next year.
In the process, the Treasury yield curve has flattened considerably and is on the verge of inverting for maturities between 2 years and 10 years (Figure 2). For some observers, this could signal a recession later this year or next.  For it to be reliable, however, the curve would have to stay inverted for a considerable period. 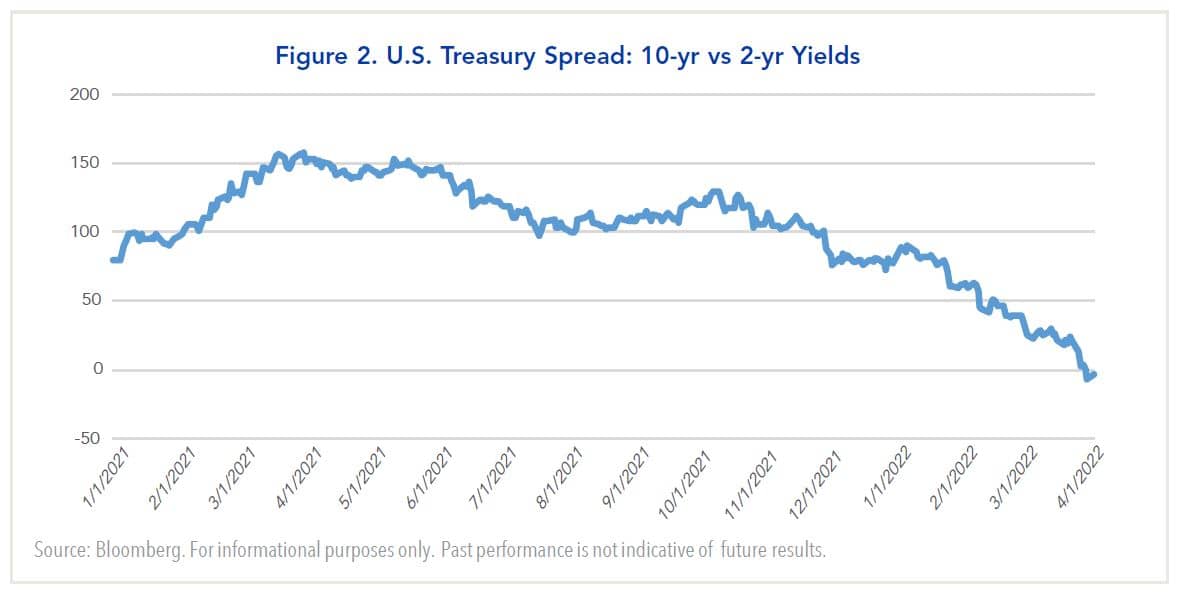 Can the Fed Avert a Recession or Stagflation?

With the Fed having commenced tightening at the March FOMC meeting, this is the central issue on the minds of investors today.
For their part, Fed officials believe they can pull off a “soft landing” in which the central bank raises interest rates above neutral and avoids a recession or stagflation. In a speech following the meeting, Fed chair Jerome Powell discussed the challenges in achieving such an outcome. He cited previous instances in which the Fed tightened policy dating back to the 1960s. In three of them—1965, 1984, and 1994—the Fed was able to tighten policy without generating a recession, while in several other instances—1974, 1980-1981, 2000, 2006, and 2019—recessions ensued.
So, why is the Fed optimistic it can avert a recession this time?
The answer is that officials believe the spike in inflation in the last 12 months is mostly due to supply disruptions associated with the coronavirus pandemic. As the effects of the pandemic wane and policy is tightened, they believe price pressures will abate later this year and next.
In the projections accompanying the March FOMC meeting (Figure 3), the median forecast of Fed officials calls for economic growth to moderate from 5.5% in 2021 to 2.8% this year and 2.2% next year. Meanwhile core PCE inflation—the Fed’s preferred metric—is projected to ease from 5.3% currently to average 4.1% this year and 2.6% next year.


Source: Board of Governors of the Federal Reserve System.

Skeptics, however, contend that the Fed’s projections are too rosy. First, they downplay the impact that expansionary fiscal and monetary policies played in boosting aggregate demand in the wake of the pandemic. Second, they do not take into account the tight labor market conditions in which the unemployment rate has fallen to 3.6% while job openings relative to new hires have climbed to record levels. They have resulted in upward wage pressures that may prove difficult to reverse. Third, the longer inflation stays elevated, the greater the likelihood that inflation expectations could become embedded by households and businesses.

The risk, therefore, is that interest rates may need to rise by more than the Fed and bond investors currently anticipate if inflation stays well above the Fed’s average annual target of 2%.

The Wildcard: The Impact of Russia's Invasion of Ukraine

Adding to the complexity of the problem is the uncertainty surrounding Russia’s invasion of Ukraine.
The principal economic impact it is having is boosting prices for energy and food grains globally. Since the conflict began in late February, the price of West Texas Intermediate has fluctuated considerably. It reached a high of $130 per barrel in early March and subsequently fell back to about $100 per barrel as President Biden announced the U.S. would release 1 million bpd from strategic reserves over the next six months.
An ameliorating factor for the United States is that it has become self-sufficient in energy over the past decade. This reflects both energy conservation on the demand side and development of shale oil production on the supply side. Still, gasoline prices are about 30% higher than at the start of this year, and they are beginning to impact consumer spending and confidence as real incomes are eroded.
By comparison, Europe is likely to be impacted to a greater extent because it is heavily dependent on Russia for natural gas. Russia is the second largest producer of natural gas globally, accounting for 16.6% of global supply in 2020. It exports more than 35% of its production, and about 70% are sent to Europe by pipeline with much of it passing through Ukraine via three major arteries. For this reason, European countries have refrained from imposing sanctions on energy imported from Russia, although this could change if the conflict persists much longer.
According to J.P. Morgan, a supply disruption could elicit a price increase in European natural gas prices similar to what occurred in late December. This would also impact the price of oil, as countries would likely switch away from natural gas: “Any disruptions to oil flows from Russia in a context of low spare capacity in other regions could easily send oil prices to $120 bbl. A halving of Russian oil exports would likely push the Brent oil price to $150 bbl.” If so, the magnitude of energy price increases envisioned would be more in line with the two U.S. conflicts with Iraq rather than the first two oil shocks, which resulted in severe global recessions.
As a result, the risk of recession is greater in Europe than the U.S. At the same time, higher food and energy costs are complicating the Fed’s task in reining in inflation: Even if the Fed ignores the direct impact on the CPI, the core rate will be affected as price increases in these items are passed along by businesses.

Weighing the above considerations, we believe a U.S. recession is unlikely this year provided the Russian-Ukrainian conflict does not escalate materially.
One reason is the U.S. economy has considerable momentum behind it, especially on the jobs front: Non-farm payrolls have increased by more than 400,000 for 11 consecutive months now, while the number of job openings to new hires has increased to all-time highs. This will partially offset the erosion of real incomes resulting from higher inflation.
Second, the Federal Reserve is just beginning to raise interest rates from zero. Even if it raises the funds rate by 50 basis points at the next FOMC meeting in May and moves by 25 basis points at subsequent meetings, the funds rate would still be considerably below inflation. To slow the economy materially, the funds rate would need to be closer to the underlying rate of inflation. This is not likely to occur until next year at the earliest and possibly not until 2024.
In the meantime, the primary channel through which Fed policy impacts the economy is via financial markets. While conditions in the bond market have tightened somewhat as a result of the rise in Treasury yields and the widening in credit spreads this year, the S&P 500 Index is close to a record high. Accordingly, financial market conditions are still fairly accommodative (see Figure 4). 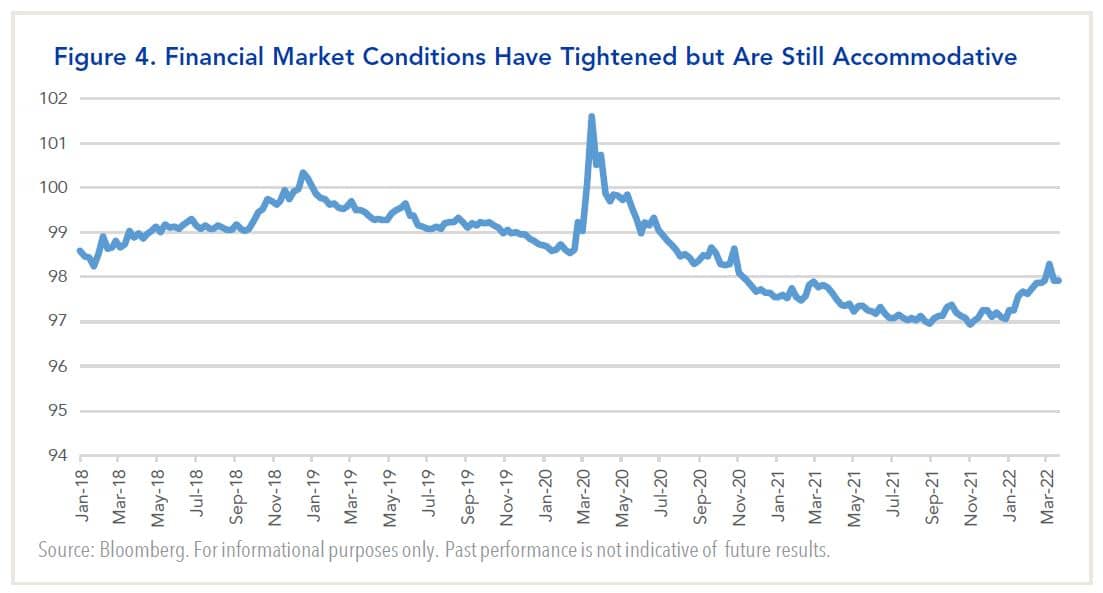 In positioning portfolios, we are cognizant that risks have increased as a result of Fed tightening and the Russian-Ukrainian conflict. However, we also believe the U.S. economy has gained traction during the recovery from the COVID-19 pandemic, and it has considerable momentum going for it, especially on the jobs front. In our view, the principal risk is that inflation could stay higher than what the Fed and bond investors currently anticipate and require ongoing rate hikes into next year.
Weighing these increased risks with valuations, we continue to position portfolios with a modest overweight to equities compared to fixed income. Equity valuations have adjusted in recent months to more reasonable levels, compensating investors for greater uncertainty over economic growth and company profits. Within equities, we have made modest adjustments to position portfolios for slowing corporate profits while continuing to favor quality companies with high excess returns on capital and strong balance sheets.
In our bond portfolios, we remain comfortable with an overweight to credit risk. Credit spreads entered 2022 near the tightest levels seen since 2000, before widening sharply as Ukraine fell under attack. Spreads recovered somewhat but ended the quarter wider across the spectrum of credit sectors. We believe valuations are fair and reflect the expectation that economic growth will be able to weather effects of tighter policy and geopolitical risks.
In terms of interest rates, we are positioning portfolios with a bias to slightly higher rates, specifically in the long end of the curve. In our view, short-term interest rates are fairly valued, having adjusted higher as expectations of Fed tightening have increased. Long-term rates are at risk to rise further if inflation is higher than expected and economic growth remains resilient amid Fed rate hikes and balance sheet reduction. 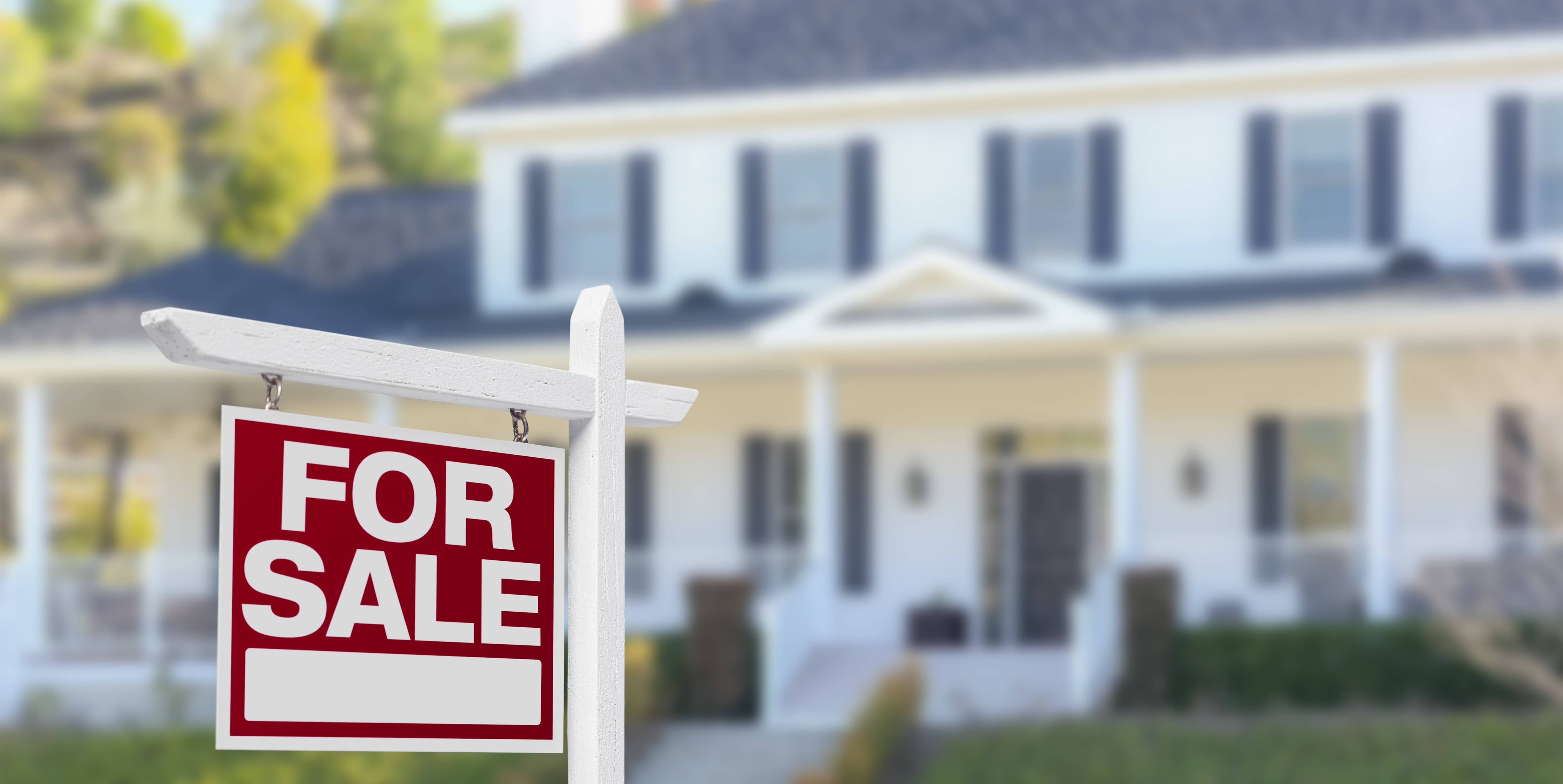