Positive news surrounding the COVID-19 vaccine rollout has led to a rally in oil prices, which were up 75% from November of 2020 through March of 2021. With questions about demand lingering, Saudi Arabia announced a surprise reduction in oil production. OPEC+ has stated that they support a reduction of global oil inventories, which is expected to provide a tailwind for oil markets going into the first half of 2021. Now, we wonder, is another commodity super cycle next?

January started with a tremendous bang for the oil market on the heels of positive COVID-19 vaccine data. With demand concerns lingering, Saudi Arabia (KSA) announced a surprise 1 mmbpd cut in oil production, which continued into February. While the market expected the cut to be reduced in April (along with the resumption of 500,000 bpd of OPEC+1 production), OPEC+ and KSA delivered another surprise, with KSA forgoing the announcement of any production increases.

While Russia and Kazakhstan will increase production by a combined 150 mbpd, largely in response to domestic demand, OPEC+ has confirmed that they will continue to support a reduction of global oil inventories. This is expected to provide a significant tailwind for oil markets, at least for the balance of the first half of 2021. 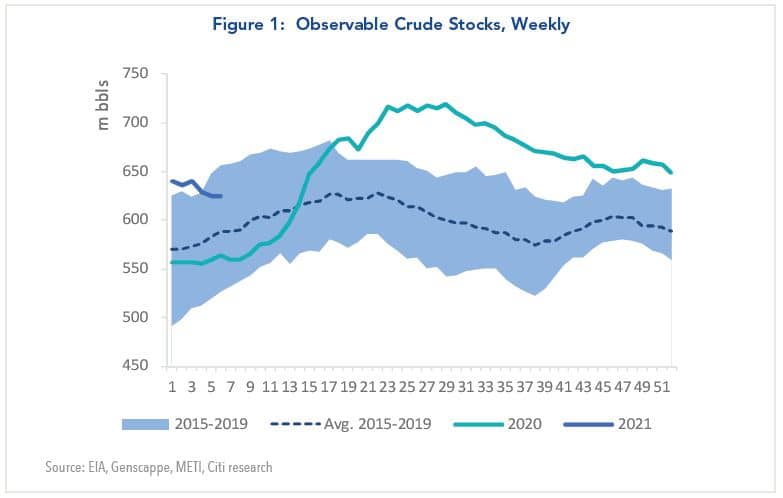 It appears that OPEC+ is in the driver’s seat for the price of oil, an ever-present force that can apply the accelerator when needed or slam on the brakes to bring down oil prices. We don’t believe the brakes will be applied anytime soon—in many ways OPEC+ is working hard to create a price floor that will provide a springboard for higher oil prices as demand continues to recover.

Since the first COVID vaccine announcement in November, oil prices have rallied 75%, from $38/bbl to $65/bbl WTI (November 1, 2020, to March 15, 2021). Midstream energy equities have seen strong performance, rallying 40%, with some now exceeding pre-pandemic levels despite the lack of a complete demand recovery and U.S. energy policy plagued with uncertainty.

While the commodity is 24% above the pre-COVID level (February 19, 2020, to March 15, 2021), midstream equities continue to lag at 10% below pre-COVID levels. We believe part of this is warranted, due to the uncertainty around near-term demand, questions pertaining to OPEC+ policy, a crippled U.S. tight oil basin, and questions pertaining to the policies of the Biden administration. We also believe that the March meeting of OPEC+ eased concerns regarding their policy as expectations remain that they are focused on normalizing inventory levels.

In our June 2020 report on the oil market, Oil is Down… But Not Out in the Tail End of the Age of Abundance, we said that OPEC was back and that OPEC was relevant. We also made the case that the oil market will be facing a significant supply crunch—“peak oil”—in the near future. This peaking of supply will likely coincide with another commodity super cycle, perhaps the last super cycle for the oil markets. Such an event will likely help accelerate the transition of energy generation from high carbon sources to lower carbon sources such as natural gas and renewables.

As we detailed in our previous report, the collapse in capital spending directed toward long-life and low-decline production (such as offshore and oil sands, which required long-lead times) in favor of short-cycle tight oil production has primed the pump for a looming supply gap. With global declines possibly as high as 7%, the window is rapidly closing for new projects and a shift in capital spending to address the supply crunch; instead of seeing a shift to long-lead time projects the opposite is happening as producers are avoiding these projects as capital discipline takes center stage. The figures below provide an updated assessment (March 2021) of continued weakness in global capital spending and a supply outlook that is lacking sanctioned projects to meet demand under multiple demand scenarios. 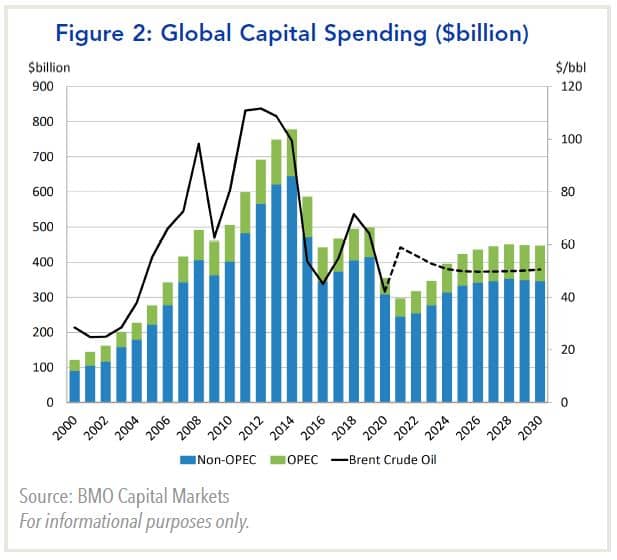 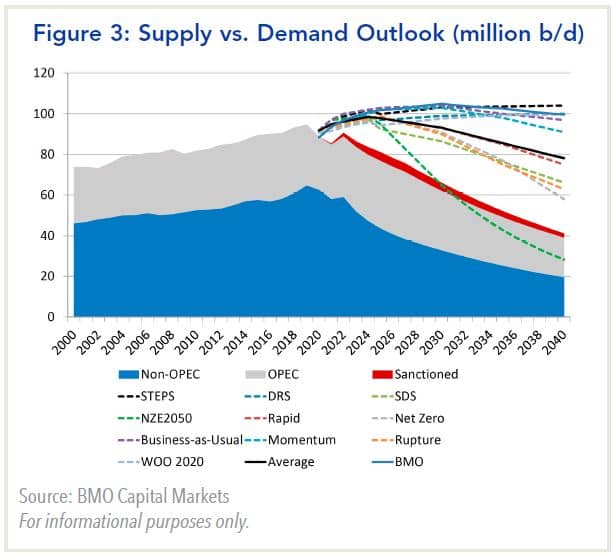 While the commodity super cycle could create a tailwind for some oil exposed midstream operators, we don’t expect to see a return to growth such as we saw from 2008-2015. Instead, the focus will likely be on improving balance sheets and better utilizing existing assets, which includes asset rationalization and processing greater volumes of natural gas. Those operators with strong balance sheets and robust cash flows should be able to capitalize on the coming super cycle, which may include embracing the energy transition when the returns become more compelling.

In our 2020 report, we provided extensive commentary on our view that the Permian was approaching peak production. The OPEC+ cuts and strong response of the commodity do not alter geology in the United States or our view that the tight oil basins in the U.S. are starting to suffer production issues common with Tier 2 and Tier 3 wells impacting Tier 1 production. This implies a reduction in growth from the Permian and other tight oil basis. 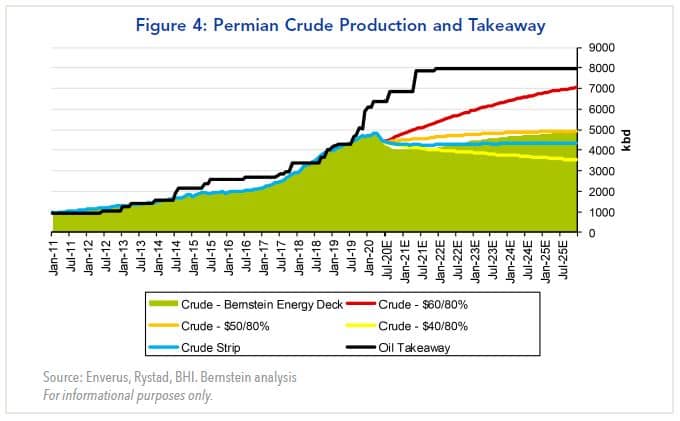 We continue to believe that the world is marching toward a period of peak supply where global decline rates will start to outpace supply additions, and that U.S. oil production has peaked. COVID impacts on the timing of peak supply are difficult to ascertain. COVID related actions have resulted in the acceleration of the depletion of higher quality Permian wells while also resulting in some shut-in production of longer-life assets. It has also paused demand growth which has put almost 8 mmbpd of OPEC+ production on the sidelines.

In their most recent quarterly earnings call, Scott Sheffield, CEO of Pioneer Natural Resources, said “U.S. shale is no longer going to be a threat to OPEC and OPEC Plus.” While the context of this quote was around lower spending and hedging, we believe it may also reflect the inability for shale to resume previous levels of growth. This is a concern that has been echoed by several executives of oil field service companies that we have spoken with over the past several months.

When oil (or gas) basins suffer from a permanent overbuilding of capacity (associated with peak in-basin production), we tend to see two significant impacts: 1) spot rates collapse, and 2) significant weakness occurs when renewing existing contracts. The overbuilding is particularly problematic when it reflects geological factors such as the ability to extract less oil/gas that previously expected.

When spot rates collapse, this has typically had an immediate impact on cash flows for owners of the asset. Weakness in contract renewal then impacts the overall value of the asset as future earnings potential moves lower. In some cases it could move to zero if the pipeline isn’t repurposed or successfully used for marketing purposes. For some analysts, like those at Bernstein, they estimate the impacts could be just over $100 million in lost EBITDA for selected midstream companies with operations tied to the Permian.3

As such, we continue to believe that investors should be positioned with a defensive tilt, carefully managing exposure to equities with significant cash flow tied to the Permian. We prefer higher quality midstream companies with stronger balance sheets that support dividends/distributions and growth opportunities outside the Permian. We believe the most significant growth opportunities for midstream companies remain with LNG exports and the growth in renewable fuels, such as biogas from dairy farms and landfill natural gas. In addition, we believe that midstream companies with increasing commodity exposure (such as exposure to NGL prices) will outperform peers with less exposure, and that these companies will come back into favor with investors and lenders as a way to grow EBITDA while reducing leverage. This is, in many ways, a reversal of the messaging from 2015-2020 where a desire for less commodity exposure and more contracted volumes was in vogue.

1 OPEC+ is the Organization for Petroleum Exporting Countries Plus consisting of the 13 OPEC members and 10 of the world’s major non-OPEC oil-exporting nations.
2 BMO Capital Market – Oil Demand to 2040: Beyond the Hype
3“Bernstein Midstream: We are on the cusp of Permian crude overbuild...who loses flows?”, June 2019. 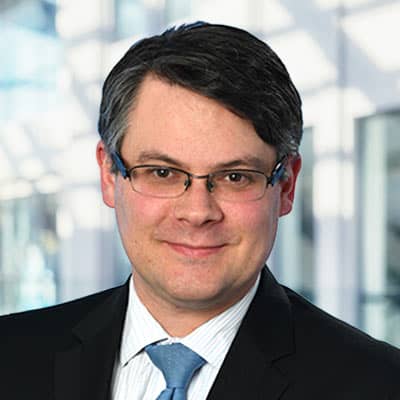 Oil Is Down... But Not Out in the Tail End of the Age of Abundance (Part 2)