Meet Our Family of Companies
Our site uses cookies to improve your visitor experience. By browsing our website, you agree to the use of cookies and agree to our privacy policy.
2022 was one of the worst years for U.S. stocks and bonds, as inflation spiked to a four-decade high. Looking ahead, the key issue for investors is whether Fed tightening will spawn a U.S. recession. Fort Washington’s Senior Economic Advisor Nick Sargen shares a 2023 outlook for the economy and how we are positioning investment portfolios.
By Nick Sargen January 24, 2023
Economics Markets
Share:

The driving force behind U.S. financial markets this past year was the surge in inflation to a four-decade high. It resulted in the Fed raising the federal funds rate by 425 basis points to 4.25%-4.50%. Intermediate and long-term Treasury yields rose by more than 200 basis points, and corporate bond spreads versus treasuries widened. As a result, the total return for the Bloomberg Barclays Aggregate Bond Index in 2022 was -13.0%, the worst showing in the post war era (Figure 1).

The U.S. stock market spent most of the year in bear territory as investors worried about the impact of rising interest rates on the economy and corporate profits. The S&P 500 Index closed the year with a negative return of -18.1%, while the tech-laden NASDAQ index posted a decline of -32.5%.

The lone asset to generate a substantial positive return was the U.S. dollar, which rose by 5.38% against a trade-weighted basket of currencies. By comparison, Bitcoin and other cryptocurrencies were hammered by the run-up in interest rates, declining in value by 65%-75%. 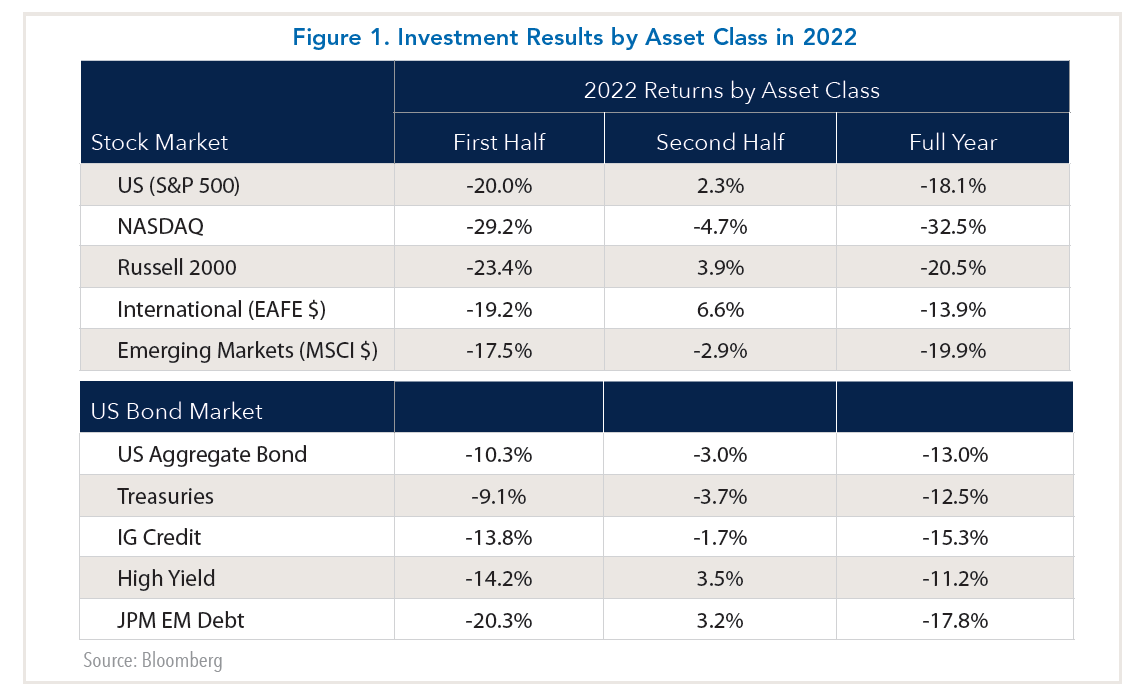 How Vulnerable Is the U.S. Economy to Fed Tightening?

Looking ahead, the key issue for investors is whether Fed tightening will spawn a U.S. recession, and if so, how severe it will be.

Fed officials concede it is a close call: the median forecasts of Federal Open Market Committee (FOMC) members for 2023 foresees real GDP growth of only 0.5%, while the unemployment rate is expected to climb to 4.6%. The Fed’s preferred measure of inflation – the personal consumption deflator – is forecast to slow to 3.1% by year-end, down from 5.5% currently.

The consensus among economists is that a recession will unfold this year, as aggressive interest rate hikes by the Fed have resulted in a substantial tightening of financial market conditions (Figure 2). The silver lining is that most forecasters envision a recession that is short and mild.

In a typical recession, Fed tightening initially affects the most interest-sensitive sectors – housing and autos – and weakness subsequently spreads to consumer and business spending. This pattern appears to be unfolding now. U.S. auto sales in 2022 were the worst in more than a decade. Home sales were down 35% in November from a year ago, and home prices weakened in the second half of 2022.  Consumer spending also softened but stayed positive while business sentiment has weakened and investment has been volatile.

This has caused some observers to question whether a housing bust could result in a severe recession such as in 2008-09. The main factor contributing to the softening is that homes have become unaffordable for many Americans, due to a 40% spike in housing prices since early 2020, and a doubling in mortgage rates last year. However, a key difference today is the inventory of homes is nearly 70% below mid-2000 levels. This is the main factor supporting home prices as demand weakens.

Beyond this, two other factors also lessen the vulnerability of the U.S. economy. One is that household balance sheets are much stronger today. For example, the ratio of household debt to GDP is about 20% below mid-2000 levels. Furthermore, household debt service payments as a percent of personal disposable income are currently about 9.5% versus 13% in 2007.

The second consideration is the financial system today is less exposed to a housing downturn. First, the credit quality of mortgages is much higher today with two-thirds of all mortgages going to prime borrowers, while only 4% of new mortgages are to subprime borrowers versus an average of 13% during the 2003-2007 period. In addition, financial institutions are more highly capitalized today. Consequently, the likelihood of a severe “credit crunch,” in which financial institutions refrain from extending credit, is lower.

Another consideration for investors is where the funds rate will peak and when the Fed will relax policy.

In this regard, Fed officials have emphasized their commitment to bring inflation back to the 2% average annual target. Fed chair Jerome Powell stated at the December FOMC meeting that there is still “work to do” to ensure this goal is attained. The median forecast of FOMC members is the funds rate will peak at 5.0%-5.25% early this year and remain there for the balance of 2023.

By comparison, the bond market anticipates the Fed will lower rates in the second half of the year as recession kicks in. In this respect, investors appear to be defying the adage “Don’t fight the Fed!” This mainly reflects different perceptions about how quickly inflation pressures will subside. Investors, for example, are keying off declines in commodity and goods prices, whereas Fed officials are more concerned about elevated prices for services (see Figure 3). 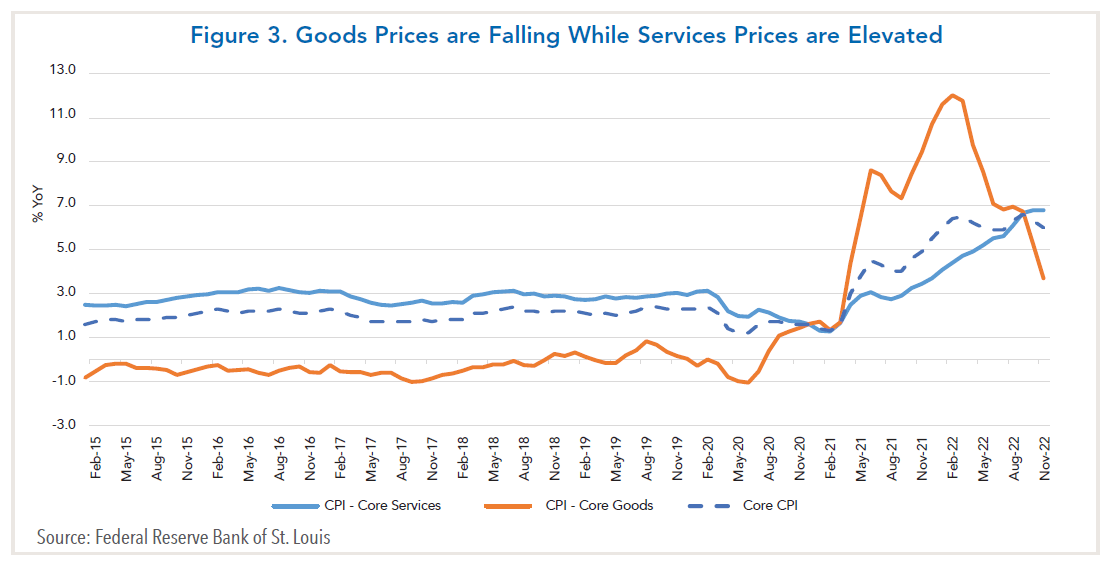 One reason prices for services are sticky is that a third of the index consists of prices for shelter – both rentals and homeowner equivalent – that have trended higher. Another reason is labor market tightness has boosted wage increases to about 5%. At the press conference following the December FOMC meeting, Jerome Powell emphasized that labor tightness may be structural, as 4 million people have exited the labor force since the COVID-19 pandemic struck.

So, which view will be correct?

Our take is the outcome hinges on how high the unemployment rate increases. Because Fed officials anticipate only a modest rise in unemployment to 4.6%, they are focusing on bringing inflation down.  However, should unemployment rise to 5% or higher, the Fed is more likely to lower rates.

During that stint, the Democrats enacted major spending programs that totaled more than $3 trillion. They were also able to garner bipartisan support to pass an omnibus spending bill that authorized $1.65 trillion of discretionary spending for the FY 2023 federal budget.

Looking ahead, however, President Biden and congressional Democrats will have to pare back their ambitious social agenda considerably. Although Republicans in the Senate were willing to compromise on the 2023 budget, House Republican leaders urged members to block its passage until next year when they will be in control. The turmoil over selecting a new Speaker of the House suggests negotiations over extending the debt ceiling will be highly contentious.

Despite the Republicans’ philosophical commitment to smaller government, federal spending has exploded since the COVID-19 pandemic struck in 2020. Since then, $5 trillion dollars have been allocated to provide pandemic relief for individuals and families, businesses, state and local governments and health care entities. This resulted in the ratio of the federal budget deficit to GDP setting a post-war record of 15% in 2020 and 12% in 2021 (Figure 4).

Looking ahead, the Congressional Budget Office’s (CBO) baseline projections see deficits of 4%-6% over the next 10 years based on current policies. They are well above the post-war average of 3% and imply a steady increase in public debt outstanding relative to GDP. As a result, there is less room for the government to pursue counter-cyclical fiscal policies or social programs should the economy slip into recession. 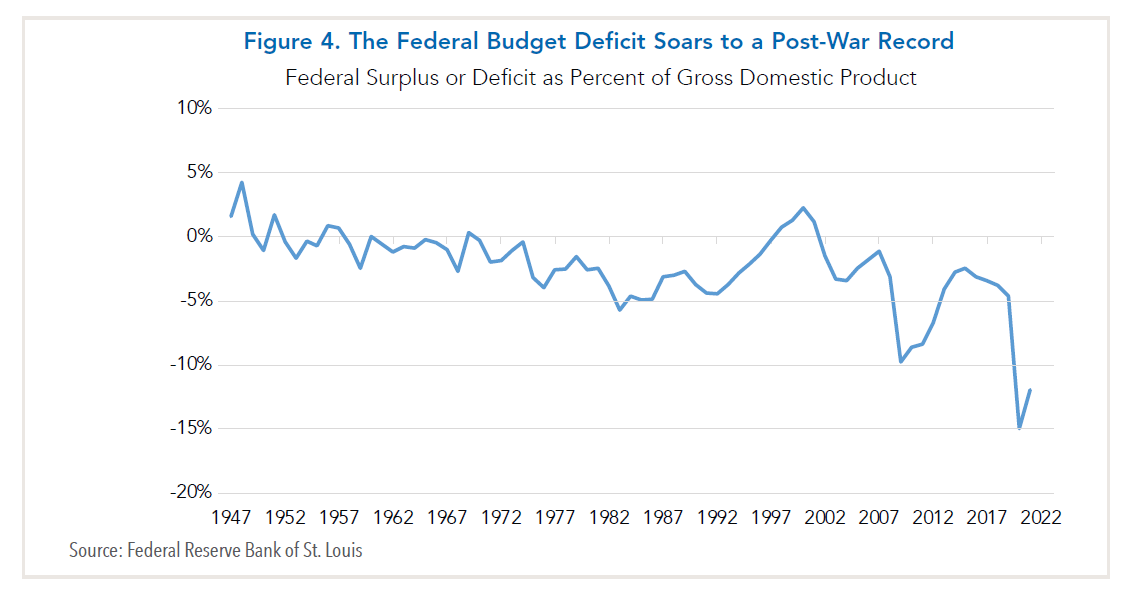 Finally, another consideration is that conditions abroad are worse than in the U.S. Europe already may be in recession as policymakers face the daunting task of alleviating shortages in natural gas stemming from Russia’s invasion of Ukraine. The most urgent need had been to curb price increases for electricity and heating fuel, although unusually warm weather since October has caused natural gas prices to plummet. Meanwhile, the Eurozone Manufacturing Purchasing Managers Index (PMI) has declined to the lowest level since June 2020.

A spike in consumer price inflation in the Eurozone to 10% is further exacerbating the situation. The ECB has responded by ending its decade-long policy of negative interest rates, and it boosted the deposit facility rate by 250 basis points in the second half of 2022. Investors anticipate that the ECB will raise rates by about 100 basis points or less this year; however, the ECB has signaled that further rate hikes are in store until inflation subsides to 2%.

At the same time, the Chinese government confronts its biggest challenge since the COVID-19 pandemic struck three years ago. It recently had to scrap its zero tolerance policy in the wake of national protests, but it lacked a strategy to limit the fallout, and the country now faces a massive outbreak.

It remains to be seen how conditions will play out. One difference from the past is the government cannot count on strong economic growth to deflect attention from its problems. Prior to the latest COVID outbreak, the IMF was projecting real GDP growth in 2022 of 3%, well below the government’s target of 5%. Now a 2% rate appears more likely. What is clear is China’s economy no longer will be a locomotive for the global economy.

Investment Strategy: Bonds Could Rally While Pressure on Stocks May Persist

Weighing these considerations, investors should be prepared for a recession in 2023, albeit one that is not as severe as in 2008-09, or as deep after the COVID-19 pandemic struck in 2020. The policy response will be less aggressive than after those bouts due to higher inflation and large budget imbalances.

In our fixed income portfolios, we are positioning portfolios with an overweight to credit sectors, focusing on investment grade corporate bonds, emerging markets debt, and high-quality securitized products (CMBS, ABS and MBS). If the economy slows more than expected, credit spreads are likely to widen from current levels. However, if a soft landing is achieved or a recession is shallow, credit spreads would likely narrow somewhat. Weighing these scenarios, we believe the risk/reward in credit spreads supports a modest overweight to risk in portfolios. With regard to interest rates, we are positioning portfolios with a slight long duration bias. We believe the current level of rates reflects an appropriate amount of Fed tightening, and that the growth and inflation outlook will bias interest rates lower over the next several months.

Within equities, we are maintaining a cautious stance but are selectively finding bottom-up opportunities, while reducing outperforming defensive names where valuations have become stretched. Earnings expectations remain elevated and are at risk to fall amid slowing economic growth. Despite most equity indices ending the year near or in a bear market, downside still remains should equity earnings deteriorate.

The 2023 Budget: A Final Attempt at Compromise Before Policy Gridlock Sets In

Will Investors Care if the Fed Lessens its Commitment to 2 Percent Inflation?

Planes, Trains and Automobiles: Will the Public Infrastructure Law Be a Game-changer?