Meet Our Family of Companies
Our site uses cookies to improve your visitor experience. By browsing our website, you agree to the use of cookies and agree to our privacy policy.
Donald Trump’s surprise victory has unleashed animal spirits, with U.S. stocks and the dollar surging as investors anticipate a pro-growth strategy and an end to government dysfunction.
Nick Sargen March 10, 2017
Markets
Share:

Like Brexit, the election of Donald Trump and the ensuing market response have surprised most observers. Previously, markets were priced for a Clinton victory and Republican control of Congress, which spelled more policy gridlock. Now with Trump’s victory and Republicans in control of both houses of Congress, market participants are hopeful that a decade of government dysfunction may finally be over.

Accordingly, investors are willing to give the President-elect the benefit of the doubt that his pro-growth strategy will reap benefits in the future. Mr. Trump campaigned on a theme of making America great again, and his policy agenda included a host of measures favorable to U.S. businesses. Since the election, the President-elect has followed up by appointing several prominent business leaders to Cabinet positions and advisory roles.

U.S. markets, in turn, have responded with a powerful surge in stocks and the dollar and a significant rise in bond yields (Figure 1). While the consensus among economic forecasters is the economy will continue to expand close to the 2% trend rate during the current expansion, investors are hopeful that the former growth trend of more than 3% per annum will be restored, and some foresee growth rates as high as 4%-5% in the next few years. At the same time, Wall Street analysts have revised their projections of S&P 500 corporate profits higher: The consensus calls for them to expand by 12% in 2017, which is the high end of the range over the past decade.

The Challenge of Meeting High Expectations

This begs the question: Are market expectations too high?

We believe there are valid reasons for expecting some improvement in the coming year or two, as the economy gained traction in the second half of 2016, the unemployment rate dipped to 4.6%, and consumer and business confidence have improved. Furthermore, a key component of GDP that has been unusually weak throughout the expansion — namely, government spending — is set to increase, as the Trump administration favors increased spending for public infrastructure and the military. Also, consumer spending, which has been a growth leader in recent years, would receive a boost if personal tax cuts are enacted.

In order to achieve sustained growth, however, supply-side forces need to be unleashed. The principal reasons some economists are pessimistic about the future is they foresee only modest growth of the labor force and continued low productivity growth (Figure 2). They contend economic growth is likely to remain in the vicinity of 2% — or more than a full percentage point below the post-war average. 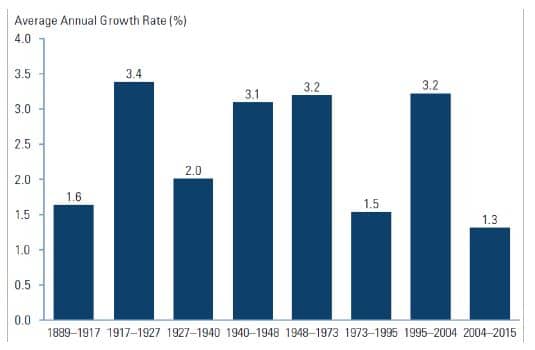 The over-riding message of President-elect Trump, by comparison, is that subpar growth is mainly a consequence of economic policies that have discouraged growth and deterred businesses from investing on plant and equipment. Accordingly, the thrust of Trump’s economic policies is to reinvigorate confidence of business leaders so they are willing to expand business capital spending that is vital to improved productivity growth.

Toward this goal, the Trump administration is seeking to reduce and simplify corporate taxes, encourage businesses to repatriate overseas profits, and to reverse de-industrialization at home, as well as to overhaul the entire regulatory structure. The chances of getting these programs into legislation are favorable, because the Republican leadership in Congress shares these goals. Also, by appointing prominent business leaders to key cabinet posts and advisory roles, the President-elect is seeking to mitigate the risk of slippage within the executive branch.

A challenge for investors, nonetheless, is that key legislation has not been drafted yet. Market participants currently are focusing on a House Republican tax bill that includes the following provisions: (i) the corporate tax rate would be lowered from 35% to 20% to make it competitive internationally; (ii) companies could expense all capital outlays immediately but no longer expense interest to remove the current bias favoring debt financing; and (iii) a “border tax adjustment” would be added whereby exports would not count as revenue while imports would not count as costs. Of these provisions, the latter is the most controversial, because it could risk supply disruptions for retailers and oil refiners, and it may not be permissible under World Trade Organization (WTO) rules.1

It should be noted, however, that there are significant differences between the House Republican proposal and the plan that Donald Trump unveiled during the campaign, which called for deeper tax cuts and less broadening of the tax base. Therefore, the legislation that is ultimately enacted could be a compromise between the two plans.

The bottom line is there are valid reasons for investors to be encouraged that distortions in the existing tax code will be addressed while regulatory burdens will also be reduced significantly. However, the devil is in the details. At this juncture it is too early to know what legislation is forthcoming and the impact on the economy and corporate sector.

There are also potential headwinds in the form of enlarged budget and trade deficits in the next few years. Because President-elect Trump is not committed to rein in federal spending, there is considerable risk the budget deficit will balloon. According to the Tax Policy Center, an independent research organization, Trump’s policies would add more than $6 trillion to the budget deficit over the coming decade. And even without spending initiatives and tax cuts, the deficit is projected to grow significantly in the future. The principal reason is an aging populace has put added burdens on entitlement programs such as Medicare, Medicaid, and Social Security. It remains to be seen whether President-elect Trump will acquiesce to Republican leaders in Congress who believe it is imperative to tackle the entitlements issue head on.

A second headwind is the U.S. trade deficit is also set to expand considerably, which is at odds with the goals of the Trump administration. First, increased government spending on defense and infrastructure will do little to boost exports, while an acceleration in U.S. growth will pull in imports. Second, U.S. businesses will also face the challenge of competing globally in an environment of a very strong U.S. dollar, which is at its highest level on a trade-weighted basis since 2003 and likely headed higher.

This combination of outsized budget and trade imbalances evokes memories of the “twin deficit” problem the U.S. encountered in the Reagan years (Figure 3). At that time, many investors believed the deficits would generate higher interest rates. However, they did not materialize, because the Federal Reserve succeeded in reducing inflation and inflation expectations, which ushered in an era of declining interest rates.

Nonetheless, the environment today is diametrically different, with inflation and interest rates near record lows and the Federal Reserve seeking to normalize interest rates. Market participants are expecting bond yields to rise in the next few years, and the specter of the long bond yielding 4% or more is a distinct possibility. If so, it would likely propel the dollar even higher against most currencies.

The principal risks in the coming year lie in the international arena, where there is increased potential for conflict over China’s large bilateral trade surplus with the U.S., as well as heightened tensions within the European Union stemming from elections in France and Germany. With respect to trade issues, President-elect Trump’s campaign was filled with rhetoric that China competed unfairly and that multinational trade agreements such as NAFTA harmed American workers. In his speeches, Mr. Trump warned that he would impose duties on imports from China and Mexico to level the playing field. Since then, the appointment of Peter Navarro, a professor of economics at the University of California, Irvine, to head the National Trade Council indicates the Trump administration will be particularly tough on China: Professor Navarro is an outspoken China critic and the author of The Coming China Wars.2

It is too early to tell whether the anti-free trade rhetoric is primarily a bargaining ploy, but we believe it is a mistake to dismiss it. During the campaign, Mr. Trump vowed to declare China a currency manipulator and to impose heavy duties on imports from China, even though China has been trying to limit the RMB’s depreciation against the dollar. If so, the Chinese government can be expected to take strong counter measures, and financial markets would likely react negatively to the prospect of a looming trade war.

Another key risk is the likelihood of added pressures on the European Union and the euro. This past year, markets were able to shrug off the results of the British referendum to exit the EU and the rejection of political reforms in Italy that led to the ouster of Prime Minister Renzi. During the coming year, however, there are key elections in both France and Germany—the two countries that are at the core of the EU. In France, Marine Le Pen has campaigned on France leaving the euro, and were she to score an upset victory the euro would likely come under intense pressure. In Germany, Chancellor Angela Merkel’s popularity has been hurt by concerns over immigration and terrorism, and there is risk the EU could lose its most powerful leader. Accordingly, the EU may face its toughest challenge yet.

In sum, U.S. equities, bond yields and the dollar have all surged since the November 8 election amid expectations that President-elect Trump will pursue a pro-growth strategy. While there are valid reasons for expecting the economy to accelerate in the next year or two, there are also considerable risks that need to be weighed. They include: (i) the possibility the economy fails to meet high expectations; (ii) the prospect for outsized budget and trade deficits in the next few years; and (iii) the increased possibility of a trade war with China and a further weakening of the European Union.

Weighing these considerations, we are positioning bond portfolios for a further, albeit more gradual, rise in bond yields in the coming year. We are also maintaining an overweight position in credit risk — both investment grade and high yield — as the likelihood of recession is low. By comparison, the outlook for the stock market is mixed. Stronger growth would lift corporate profits, which had stagnated until the second half of 2016. However, valuations are somewhat stretched and rising interest rates and a strong dollar would be impediments. The clearer call, in our view, is that rotation away from utilities and other high dividend-paying stocks is likely to continue.

2018 Outlook: Solid Economy, But No Encore for Markets