Meet Our Family of Companies
Our site uses cookies to improve your visitor experience. By browsing our website, you agree to the use of cookies and agree to our privacy policy.
2017 was a stellar year for global equities fueled by renewed investor confidence amid a synchronized world expansion.
Nick Sargen January 9, 2018
Markets
Share:

One of the defining features of the past year was a revival of confidence among consumers, businesses, and investors alike. This development translated into a steady rise in the U.S. stock market throughout the year, with virtually no pullback along the way (Figure 1). For some observers, the turning point coincided with Donald Trump’s surprise election victory. It unleashed “animal spirits,” as investors responded favorably to his pro-growth, pro-business agenda, which featured tax cuts for businesses and individuals and policies to lessen the regulatory burdens businesses faced.  Indeed, the stock market has generated returns of 27.9% - 38.6% since the election. 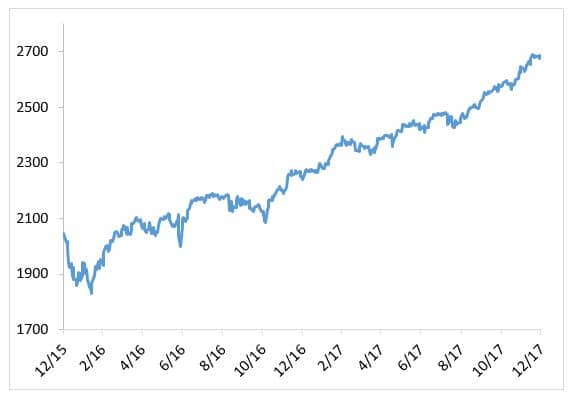 The United States, however, was not alone: International and emerging equity markets exceeded U.S. returns (Figure 2), as the global economy experienced a synchronized expansion in which all of the 35 members of the Organization of Economic Cooperation and Development (OECD) generated positive growth. The eurozone experienced its strongest growth since 2010, led by a solid performance of the German economy. The election of Emanuel Macron as President of France provided an added boost to confidence in the eurozone. In Asia, the Japanese economy also emerged from a two-year slump, and the Chinese government succeeded in stabilizing growth above 6%. These developments contributed to improved world trade volumes and commodity prices that helped sustain many emerging economies. The story of 2017, in short, is one in which a rising tide lifted all boats.

In the United States, the surge in confidence readings following the November elections did not immediately translate into stronger economic growth. However, by mid-2017 the economy had gained momentum, posting annualized real GDP growth of about 3% for the final three quarters. This represented the first such gain in more than a decade. The growth pickup was accompanied by solid jobs growth and declining unemployment, which approached the 4% threshold.

One of the most encouraging developments has been an acceleration in business capital spending to a 9% annual rate recently. Previously, business investment had been unusually muted since the expansion began in mid-2009, even though corporate profits rebounded to all-time highs while interest rates fell to record lows. During 2016, moreover, capex spending turned negative, as corporate profits declined from mid-2015 to mid-2016. Weakness in business investment spending, in turn, has been a factor contributing to a slowdown in growth of labor productivity for the past two decades.

As 2018 gets underway, forecasters are revising their growth projections upward in the vicinity of 2.5 or higher. The main reason is the recently enacted tax bill provides cuts in personal and corporate taxes that are front-end loaded: Estimates of the stimulus provided in 2018 range from 1.0% to 1.3% of GDP. The tax cuts are expected to boost both consumer spending and business capital spending in the next year or two, while both consumer and business confidence readings remain at elevated levels.

While the tax legislation should provide a temporary lift to the economy, there is uncertainty about the effects on long-term growth: To a large extent, it depends on how businesses respond to the various tax incentives in the legislation, as well as to diminished government regulations.

Optimists on the Republican side foresee these developments as having a large impact on capital spending and wages.1 For example, Martin Feldstein, chairman of the Council of Economic Advisors during the Reagan administration, estimates the capital stock could increase by $5 trillion over the next decade. If so, it would imply a gain of $4,000 per household in today’s dollars. Also, Robert Barro of Harvard estimates the tax bill could boost long-term growth by 0.3% per annum. These calculations have been challenged by economists who served in the Obama administration, including Larry Summers and Jason Furman. They maintain the results are likely to be far less robust based on what they consider to be more realistic assumptions.2

The consensus view among economists is that trend growth is likely to increase on the order of 0.1%-0.2% per annum, which is well below the 0.5% estimate of the Trump administration. At the end of the day, it is an empirical issue. Because there have been only three large-scale tax cuts in the post WWII era and conditions were very different from those today, there is no way of knowing how the economy will respond with any degree of precision. Meanwhile, we are open minded about what will happen and are monitoring business investment as the best gauge of the long-term impact.

Impact on the Budget Deficit

One of the main critiques of the tax legislation is that it will add to the federal budget deficit when federal debt outstanding already is at a high level of 77% of GDP and the unemployment rate is near a record low. The original House bill that was drafted by Speaker Paul Ryan and the GOP leadership in mid-2016 was intended to be deficit neutral, with the loss of tax revenues being offset by measures to reduce deductions that would broaden the tax base. However, in order to gain the support of President Trump and others in the GOP who favored a more stimulative package, a compromise was worked out in which the federal debt outstanding was targeted to rise by $1.5 trillion over the next ten years.

The bond market has not reacted to this development thus far primarily because the current budget deficit is less than 3% of GDP and the economy is not in danger of over-heating.  However, according to the Congressional Budget Office (CBO), in the absence of policy changes the deficit is projected to reach more than 5% of GDP in the coming decade as baby boomers retire and place added burdens on entitlement programs such as social security, Medicare and Medicaid. From this perspective, the tax legislation will exacerbate the situation, and real interest rates are likely to rise from their current low levels.

For its part, the Federal Reserve under the new chair, Jerome Powell, is prepared to continue raising interest rates slowly as the economy gains momentum, while shrinking its balance sheet incrementally.  In the latest FOMC minutes, Fed policymakers signaled that three quarter-point rate hikes could be in the offing, matching the increases in 2017. The bond market, however, currently is pricing in only two moves, mainly because core inflation remains below the Fed’s 2% target, and wage increases have stayed moderate.

Despite the rate hikes and asset sales, the conduct of monetary policy remains highly accommodative as judged by various indices of financial market conditions (Figure 3). The reason is that despite a 75 basis point increase in the funds rate, movements of other financial market indicators are supportive of economic growth. They include relatively unchanged long-term bond yields, narrower corporate credit spreads versus treasuries, a buoyant stock market and a softer dollar. 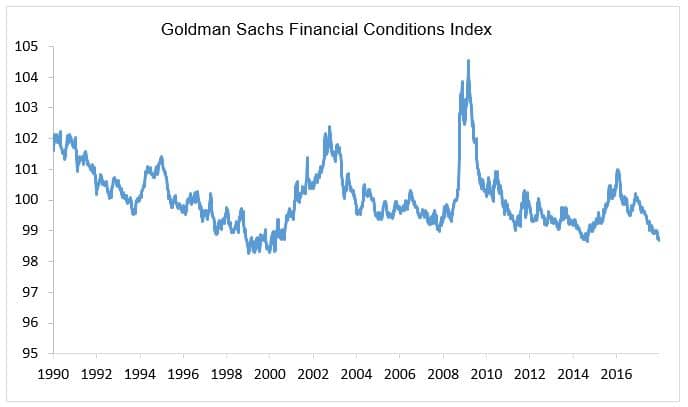 Weighing these considerations, the landscape both at home and abroad remains supportive of equities and other risk assets, as the global economy continues to experience a synchronized expansion. There is even a possibility the U.S. economy could have a breakout year, in which real GDP growth approaches the 3% threshold for the first time since the 2008 financial crisis.

Nonetheless, we do not expect equity returns in the coming year to come close to matching those in 2017, because much of the favorable news about tax law changes and regulatory reforms are priced into the stock market. Wall Street strategists, for example, are calling for S&P 500 profit growth to be in the low double digits, as the tax bill alone is expected to add four-to-five percentage points to after-tax profits. By comparison, there was greater uncertainty about the earnings outlook one year ago, because profits had declined from mid-2015 to mid-2016, and the tax bill had yet to be drafted.

Considering how far the stock market has come in the past nine years – nearly quadrupling from the lows in March of 2009 – and how little volatility there was this past year, some observers believe another asset bubble has formed. This possibility cannot be ruled out, and some areas of the market – notably crypto currencies – exhibit investor mania.  However, we take comfort that valuations are not at extremes, profit margins have improved, market breadth is broad-based, and investor sentiment is not extreme. According to Cornerstone Macro, for example, many investors are cognizant that the investment cycle is in its later stages, and they have been gravitating to defensive plays such as large cap stocks with franchise values rather than more speculative small cap names.

The main risks to the outlook continue to be on the geopolitical front, with the confrontation between the United States and North Korea heading the list. Another risk is the possibility the Trump administration could turn more aggressive on trade issues and possibly allow NAFTA to lapse.  If so, it would have major reverberations if it caused investors to reassess the threat of protectionism and retaliation. While we do not believe this is the most likely outcome, it cannot be ruled out altogether.