Meet Our Family of Companies
Our site uses cookies to improve your visitor experience. By browsing our website, you agree to the use of cookies and agree to our privacy policy.
The Federal Reserve is expected to announce it will begin to shrink its balance sheet over the next few years at this month’s FOMC meeting.
Nick Sargen September 14, 2017
Policy
Share:

During the GFC the Federal Reserve engaged in unorthodox policies that were intended to stabilize the financial system and to encourage investors to add to holdings of risk assets. The Fed did so by purchasing massive amounts of government securities and residential mortgage-backed securities (RMBS) that increased its balance sheet four-fold (Figure 1). The initial round of quantitative easing (QE) is widely credited by economists as having stabilized the financial system and thereby averted an even worse outcome. However, subsequent rounds were viewed more skeptically, as they occurred when the economy and markets had stabilized. 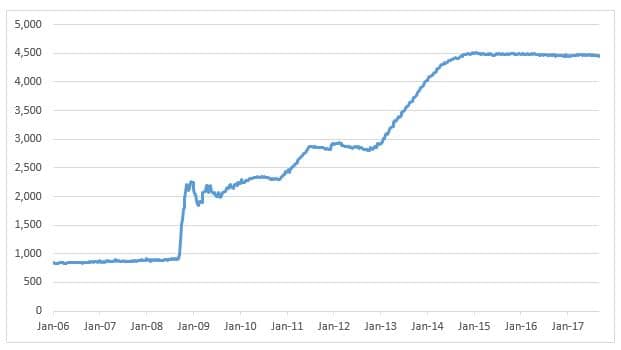 The Fed’s intent was to encourage investors to add to risk assets such as corporate stocks and bonds, which would bolster the economy by creating a positive wealth effect and ease borrowing conditions for consumers and corporations. From the Fed’s perspective, it was worth doing so in order to reduce the unemployment rate, which fell from a peak of 10% to below 4.5% recently. One of the main criticisms, however, is that its actions also distorted capital market prices and thereby may contribute to another asset bubble. Previously, the Fed primarily influenced short-term interest rates rather than the entire term structure and risk assets, so it would not distort capital markets.

The ultimate test of the QE experiment is the Fed’s ability to develop a successful exit strategy. The Fed’s staff has been working on a game plan since the early part of this decade. One of the first actions was the decision to pay interest on bank reserves. By doing so, the Fed created an additional means to control bank reserves and thereby lessen the risk that the money supply would expand unduly once bank lending expanded materially. Officials were also cognizant of mistakes their predecessors made during the Great Depression, when the Fed doubled reserve requirements and banks responded by reducing loans outstanding considerably.

One of the key differences today is that monetary policy works through capital markets, as well as through the banking system. Therefore, the Fed ultimately must influence investors’ expectations by communicating its intentions clearly. Policymakers learned this lesson all too well during the so-called “taper tantrum” in mid-2013, when Ben Bernanke mentioned in Congressional testimony that the Fed was considering winding down its purchases of securities in 2014. Much to the Fed’s chagrin, bond yield surged by a full percentage point during the remainder of 2013 as investors believed the Fed was about to tighten monetary policy.

In light of this experience, some observers are concerned that a similar outcome could occur as the Fed pares its holdings of securities. The prevailing view, however, is that this news already is priced into markets, and a spike in rates is only likely if there are surprise developments. Recognizing this, Fed officials have gone out of their way to reassure investors that it will shrink its balance sheet very gradually: It has stated that it will not sell securities outright, but will allow a portion to roll off its books as bonds mature.

The Fed also indicated at the June FOMC meeting that its balance sheet would eventually decline by $50 billion on a monthly basis ($600 billion annually) until it chooses to halt or reverse the process. At this pace, the monetary base would revert to its pre-crisis growth trend by 2021. However, Fed watchers do not expect it to get there: Estimates vary, but the general consensus is the terminal size of the balance sheet the Fed range is around $2.5 trillion, or roughly one half of the current level. The Fed has indicated that the balance sheet will be no larger than necessary to manage monetary policy in the current framework, which requires more reserves than pre-crisis policy.

It remains to be seen how well the transition to policy normalization will go.  Although the initial process has been smooth, the Fed nonetheless faces formidable challenges ahead. One is to ascertain the natural rate of unemployment, commonly referred to as NAIRU, below which inflation rises. This is important because the Fed utilizes econometric models that assume the Phillips curve relationship between wage increases and unemployment holds. The relationship, however, is far from stable: Previously, wage pressures would typically be evident when the unemployment rate is below 5%, but this has not happened currently. The reason is unclear to policymakers and market participants, but one reason may be is that there is a large pool of workers who are currently working part time that are seeking full time jobs.

Meanwhile, the core rate of inflation has drifted below the Fed’s 2% target. This has increased uncertainty about whether it will raise the funds rate at the end of this year, as it did in 2015 and 2016. Nonetheless, while the timing of rate increases is uncertain, we believe the Fed is aiming for a funds rate of 2.0% and will then pause. This is well below the average rate of 4%, which is typical for an economy growing at 2% and inflation close to that pace.

This begs the question of whether monetary policy will eventually revert to the way it was conducted before the GFC, when it mainly influenced the volume of bank reserves by purchasing or selling treasuries to influence the funds rate.

Our assessment is that the conduct of monetary policy has been altered permanently, as the transmission mechanism increasingly occurs through capital markets. If so, investors need a guide to assess whether policy conditions are becoming easier or tighter. The standard procedure today is to look at a variety of financial market indicators — such as short term and long term treasury yields, credit spreads, the stock market, and the trade weighted dollar — to compute a financial conditions index. Thus, based on the latest readings, financial conditions have actually eased despite the increases in the funds rate, because equities have risen while credit spreads and the trade-weighted dollar have declined (Figure 2). 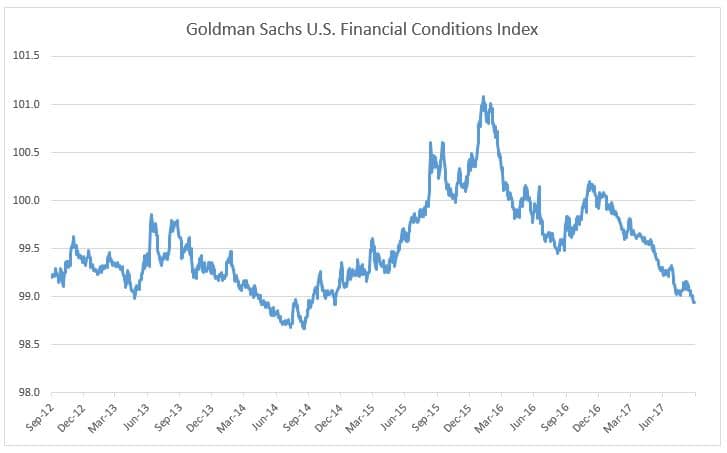 Finally, it remains to be seen how monetary policy may shift as the composition of the Board of Governors changes. By next year, for example, there could be a new Fed Chair, along with a new Vice Chair and three new governors. It is too early to speculate about what is in store. Nonetheless, investors will be keen to assess whether monetary policy will remain highly discretionary and consensual, as it was during the Bernanke-Yellen era, or whether it will become more rules based, as some Fed critics have argued. In this respect, the changing of the guard will become a focus for market participants in the coming year.

Assessing Treasury Yields: The Shape of Things to Come

What’s Down on Inflation?