One of our main messages for investors since the presidential election has been to focus on policies of the Trump Administration that will have an important bearing on the economy. They are the news that will drive financial markets, as opposed to comments and tweets by the President that many regard as noise.

Until recently, the only substantive policy proposal was the House tax reform bill drafted by the Republican leadership last summer. It contains features that President Trump supports including: (i) a significant reduction in the corporate tax rate (albeit to 20% instead of the 15%); (ii) immediate expensing of capital outlays but no interest rate deductibility; and (iii) incentives for multinationals to repatriate profits earned abroad.

The most controversial element is the border adjustment tax (BAT) that effectively subsidizes exports and taxes imports of overseas affiliates. The intent is to eliminate incentives for U.S.-based firms to shift production abroad, and the BAT is also estimated to create more than one trillion dollars in tax revenues over a decade. The latter is deemed essential by the Republican leadership to ensure tax reform is neutral for the federal budget.

The prospect of significant tax reform combined with regulatory relief, in turn, has been a major driver of the stock market rally since the election. Indeed, some surveys indicate that approximately 70% of those polled believe legislation will be passed later this year. The principal uncertainty is whether the BAT provision will clear the final bill. If not, prospects for the budget deficit expanding considerably are higher, as it will be difficult to make up the loss in revenues.

Beyond this, investors suspect the budget deficit is set to widen during the Trump Administration for the following reasons: (i) President Trump supports a large increase in military and security spending as well as a one trillion dollar infrastructure program; (ii) during the campaign he indicated he would not touch entitlement programs such as Social Security, Medicare, and Medicaid; and (iii)  the President has stated he would help pay for these programs by making large scale cuts in other discretionary spending; collectively, however, they account for only 15% of total federal spending.

With the House Republican leaders recently having drafted legislation to replace Obamacare and the Office of Management and Budget submitting its plan for discretionary spending in the coming fiscal year, investors are now examining details of both plans and assessing the prospects they will be enacted.

The budget plan submitted by OMB and the Republican bill to replace Obamacare were submitted separately; consequently, they have each drawn considerable scrutiny. To understand them better, however, it is important to recognize that both are key components of the FY2018 budget plan that will be enacted later this year.

The plan submitted by OMB last week, for example, applies only to discretionary federal spending, which represents about 30% of total federal spending. Under the OMB proposal, military and security outlays would increase by 9% in FY2018, and would be funded entirely through cutbacks in other programs, of which the largest would be for social programs and the EPA. However, because Democrats and some Republicans are staunchly opposed to large-scale cutbacks in non-defense spending, the OMB plan is widely perceived to be an opening move by the Trump Administration that lays out its priorities.

The main areas of spending that are not addressed in the OMB proposal are mandatory programs, which consist of entitlements (Social Security, Medicare, and Medicaid) and net interest payments on the national debt. Of these, the fastest growing segment is Medicaid, which was expanded as part of the Affordable Care Act (ACA) and resulted in the largest gain in insurance coverage, about 11 million people. As currently constituted, it is an open-ended obligation of the federal government.

Robert Samuelson of The Washington Post observes (March 20, 2017) that Medicaid increasingly is another mechanism by which government skews spending toward the old and away from the young: “Although three-quarters of Medicaid recipients are either children or young adults, they account for only one third of costs. The elderly and disabled constitute the other one-quarter of recipients, but they represent two-thirds of costs.”  Samuelson concludes that getting Medicaid costs under control is a much needed reform, considering the aging of the population, with the number of Americans 85 and older expected to increase by 50% by 2030.

This is where the Republican Health Care bill comes into play, as one of the key provisions is phasing out Medicaid expansion through 2020. Under the Republican bill the program also transitions to a system of block grants to each state that is based on per-capita payments for the Medicaid population. According to the Congressional Budget Office (CBO), the Republican bill cuts spending by $1.2 trillion net and it eliminates new taxes worth just shy of $900 billion through 2026, of which the vast saving is from reduced Medicare expense.

That’s the good news. The bad news is the cost saving is attributable to fewer people enrolling for medical insurance: CBO estimates there will be a decline of 14 million enrollees next year relative to the Obamacare tally and a cumulative decline of 24 million by 2026. Even if the CBO estimates prove to be too high, they pose a political problem for the Republican leadership in Congress, who must bring the conservative wing of the Party that favors a quicker end to Medicaid expansion into the fold together with moderates in the Senate who are concerned about a voter backlash if coverage is diminished.

At this juncture, it is unclear whether the Republicans in Congress will be able to find an acceptable compromise. The first clear indication will come this week when a voted is slated in the House of Representatives. While conservatives favor an earlier end to Medicaid expansion or simply repealing the ACA, such action would still leave in place the expensive open-ended federal Medicaid commitment.

Thus far, President Trump has been supporting Speaker Ryan’s plan, but he could switch tactics if passage of the bill appears in trouble. Also, if the President continues to back the plan, he will be criticized for breaking his campaign pledge of not touching entitlements and his assurance that no one will lose coverage under the Republican plan.

Conversely, should Republicans be unable to agree, it would damage the chances for meaningful tax reform and harm their chances for maintaining control of Congress in the 2018 elections. Daniel Henninger of The Wall Street Journal (March 10, 2017) characterizes the Republican dilemma as follows:

“The day the Republicans clutch on this (healthcare) reform, there will be six-column headlines across The Washington Post and New York Times: “Trump Abandons Promises on Health Care”

“It will be a fast ride downhill from there. That is because the health-care reform bill is inextricably linked to the politics of tax reform, the second pillar of the Trump legislative agenda.”

The challenge of confronting entitlement program expansions is particularly formidable now, as the aging of the baby boomers implies a steady increase in the size of the federal budget deficit in coming decades absent any changes in current policies (Figure 1). Indeed, by 2025 people 65 years and older will comprise 20% of the total population. Meanwhile, with the added pressure to increase military and infrastructure spending the inevitable question investors must ask is “who will pay the bills?” Once market participants understand the nature of the fiscal predicament, investors may reassess the optimistic assumptions that are embedded in financial markets today. 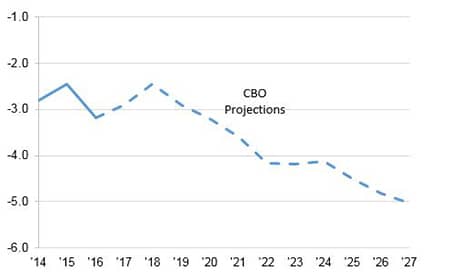 Assessing Treasury Yields: The Shape of Things to Come