Meet Our Family of Companies
Our site uses cookies to improve your visitor experience. By browsing our website, you agree to the use of cookies and agree to our privacy policy.
The U.S. dollar has come under pressure this year after steadying in late 2017, even though economic data have been supportive and the Fed is expected to raise interest rates several times.
Nick Sargen February 1, 2018
Policy
Share:

Differentials in Bond Yields & the Dollar

Over the past four years, the fate of the dollar has been closely tied to the relative strength of the U.S. economy and the spread between U.S. and foreign government bond yields. For example, the dollar began to strengthen steadily in mid-2014 when the Fed signaled it was about to end its bond buying program amid signs the U.S. economy was on solid footing. This development coincided with the ECB’s announcement that it would pursue negative interest rates to counter deflationary pressures in the euro-zone.

Thereafter, the dollar rose steadily against the euro and other currencies in 2015, and in 2016 it received an added boost following Donald Trump’s election victory amid optimism that U.S. economic growth would accelerate.  The dollar’s rise throughout this period coincided a significant widening in yield spreads between U.S. treasuries and German government bonds (Figure 1).

In 2017, however, the dollar reversed direction against the euro and other currencies, and depreciated by about 10% on a trade-weighted basis (Figure 2). The surprise most currency forecasters (myself included), who thought the dollar would appreciate on the back of Fed tightening. The principal reason it softened is that overseas economies turned in stronger-than-expected performance early on, while the U.S. economy got off to a slow start. As a result, U.S. bond yields plummeted from their highs after the U.S. election, and the spread between U.S. and foreign bonds narrowed considerably. 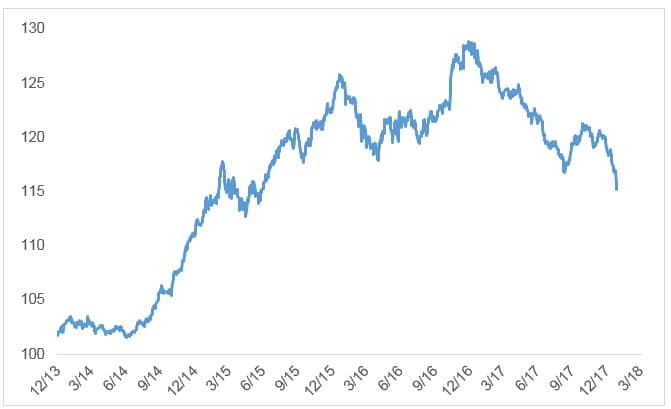 During the fourth quarter of 2017, treasury bond yields surged again in response to a pickup in economic growth and passage of tax legislation that was expected to give the economy an added boost in 2018. These developments, in turn, enabled the dollar to stabilize against most currencies.

Heading into 2018, currency analysts were divided in their views about the dollar’s direction. Some called for the dollar to appreciate on the back of stronger U.S. growth and rising interest rates, while others expected it to soften as continued improvement in the euro-zone raised the prospect the ECB would end its bond buying program.

Meanwhile, the dollar has come under renewed pressure since the beginning of this year, depreciating by 3-4 percentage points on a trade-weighted basis. This has occurred even though U.S. economic data have been solid: While the headline figure for fourth quarter GDP growth was 2.6% annualized, final domestic demand was considerably stronger at 4.3%, suggesting the economic momentum since last spring is ongoing. Consequently, market participants anticipate the Fed will boost the fed funds rate by a quarter point at its March meeting.  Moreover, the bond market is pricing in two more increases in the remainder of this year.

Data for the euro-zone and Japan have also showed continued improvement, which has helped support both the euro and the yen. The Eurozone composite PMI, for example, reached its highest level in 12 years in January, and some forecasters are raising their GDP projections for 2018 above the 2.0% threshold. This has added to confidence that the ECB will end its QE program in September. Meanwhile, Japan’s PMI index rose its highest level in five years, when Prime Minister Abe unveiled a program to counter the threat of deflation and to boost real GDP growth to 2%. While Abenomics has not delivered on the 2% inflation target thus far, Japan nonetheless has experienced 8 consecutive quarters of positive growth, which is the best performance in 16 years.

Against this backdrop, the new element that has impacted the dollar is heightened awareness among market participants that the Trump administration is about to take a harder line on trade policy issues than it did in 2017. China, Canada, and Mexico are at the top of the trade agenda for 2018.1

With respect to China, where the U.S. runs a bilateral trade deficit of more than $300 billion, the Trump administration has recently imposed countervailing duties on imports of solar panels and washing machines, and it is reviewing steel and aluminum imports, as well. The administration is also considering imposing trade penalties for intellectual property theft, and legislation is pending in Congress that would bring greater scrutiny of Chinese investments in the U.S. However, President Trump has not followed through on his campaign pledge to implement across-the-board tariffs on Chinese imports, nor is the administration likely to do so, as it would invite retaliation.

In the case of Canada and Mexico, the U.S. is in the midst of negotiations over how to modify NAFTA. The Trump administration has put forth tough proposals on rules of origin, dispute settlement provisions, a sunset clause and other items that have alarmed segments of the U.S. business community that have close ties with Canada and Mexico. Moreover, President Trump has repeated his warning that he is prepared to scrap the treaty if U.S. conditions are not met.

While some commentators are concerned these developments could invite retaliation and increase the possibility of a global trade war, market participants in the meantime perceive that a weaker dollar is the path of least resistance to achieve the Trump administration’s goal of balanced trade. This perception was reinforced by Treasury Secretary Mnuchin’s comments last week that a softer dollar was good for U.S. trade, which added to pressures on the U.S. currency. However, Secretary Mnuchin subsequently modified his remarks by stating that a firm dollar was the U.S. interests over the long run.

2018 Prospects for the Dollar

While the dollar is off to a soft start this year, we are not convinced it will weaken considerably further, mainly because U.S. growth is likely to accelerate in response to the tax legislation, and inflation expectations are beginning to increase. If these conditions were to unfold, U.S. bond yields would likely move higher, which should bolster the dollar. Furthermore, while the euro-zone economy has also improved, the euro has retraced more than 60% of its depreciation versus the dollar since mid-2014, which eventually could slow growth. ECB President Draghi has not indicated the current level of the euro poses a problem, but he could alter his stance if it continues to strengthen.

At the same time, the renewed market focus on trade issues will likely limit the dollar’s upside. I am not overly concerned about trade sanctions on select Chinese exports or on intellectual property, as the EU and other countries are following a similar strategy. The message being sent to China is it is a global economic power and no longer can engage in government policies that are intended to give it a competitive advantage in international trade. For the time being, the Trump administration has also refrained from declaring China to be a currency manipulator, because it has not been intervening in currency markets to weaken the yen and also because the Trump administration seeks China’s support in reining in North Korea.

That said, I am more concerned about growing trade frictions with our North American trading partners. The reason: Canada and Mexico are the two largest trading partners of the U.S., accounting for a production and trading network of $1.3 trillion. Since its formation in the early 1990s NAFTA has supported growth in trade in North America, which is beneficial to the U.S., and there is no evidence it has contributed to job losses in the aggregate, as some politicians contend. (Note: U.S. jobs in manufacturing were unchanged throughout the 1990s, and overall job growth was exceptionally strong.) Pulling back from NAFTA would hurt U.S. workers, farmers, and businesses and would send a clear negative message to the world that inevitably would invite retaliation.

Thus far, market participants have adopted a wait-and-see posture on this issue, as the Mexican peso has remained firm against the dollar. Nonetheless, abrogation of NAFTA is a wild card that would have far-reaching ramifications for U.S. and global markets.

What’s Down on Inflation?