Following Donald Trump’s surprise election victory, market participants were upbeat about corporate tax reform and deregulation but nervous about Trump’s long-held views that American workers were being disadvantaged by our trading partners. Until recently, the prevailing view was that his statements about abrogating NAFTA and imposing across-the-board tariffs against China were a bargaining ploy to obtain trade concessions. This view was reinforced by President Trump’s decisions to renegotiate NAFTA and to refrain from declaring China to be a currency manipulator while the administration sought China’s assistance in influencing North Korea to abandon nuclear weapons.

Developments this year suggest trade policy issues are becoming much more important. The announcement of tariffs on solar panels and washing machines in January drew little market reaction.  However, the subsequent announcement about imposing duties of 25% and 10% on imports of steel and aluminum, respectively, caught policymakers in the U.S. and abroad completely off guard and resulted in increased market volatility.

While these actions, by themselves, will have only limited impact on the U.S. economy, they have raised concerns that the situation could escalate. Paul Ryan and other prominent Republicans have urged the President to rescind his decision on grounds it could have unintended consequences and undermine the positive impact of tax legislation on the economy. While President Trump has not rescinded his decision, he has indicated willingness to be flexible: He has granted a temporary exemption to Canada and Mexico pending the outcome of negotiations over NAFTA, while also exempting Australia and leaving open the possibility of further exemptions.

Investors Should Focus on NAFTA & China

The main risk that investors and policymakers are worried about is the situation could escalate if America’s trade partners retaliate and President Trump ups the ante. Some critics of the President’s action have recalled how the Smoot-Hawley tariffs exacerbated the Great Depression. However, such an outcome is remote, as the circumstances are quite different: U.S. tariffs currently average only 1.6% versus 20% in the 1930s, and the global economy is in the best shape since the Global Financial Crisis.

The relevant issue today is what the Trump Administration’s stance will be with the principal trading partners of the U.S. – Canada, Mexico, and China. Negotiations over NAFTA have been under way for more than a year now, and some commentators believe the President’s announcement on steel and aluminum tariffs was intended to prod Mexico and Canada to make concessions. President Trump, for example, tweeted the following message on March 5:

We have large trade deficits with Mexico and Canada. NAFTA which is under renegotiation right now, has been a bad deal for the U.S.A.  Massive relocation of companies and jobs. Tariffs on Steel and Aluminum will only come off if new & fair NAFTA agreement is signed.

Neither Canada nor Mexico blinked, however, and Trump subsequently backed off from applying the tariff increases to them. A recent commentary by Ana Campoy on the Quartz website was titled Trump’s tariff threats are actually improving NAFTA negotiations.1 The bottom line is there is considerable uncertainty how the negotiations will ultimately play out. Should NAFTA be jeopardized, however, it would have significant adverse consequences for trade in North America, which is second only in size to the European Free Trade Association, and for global financial markets.

Meanwhile, some commentators believe President Trump’s next action is likely to focus on China, which runs the largest bilateral current account surplus – $337 billion in 2017 – and which has been accused of violations of intellectual property rights. According to Cornerstone Research, Trump has suggested cutting the trade deficit with China by $100 billion annually and a wide range of possibilities are under consideration.  They include restrictions on imports from China, direct investment in the U.S., technology exports to China, currency manipulation by China among others.2  Cornerstone believes action against China will occur in phases and come soon – in a matter of weeks or few months. A decision on intellectual property violations, for example, could be forthcoming by the end of April. If they are substantial, China would retaliate and try to inflict maximum political pain by targeting iconic American brands and companies, as well as politically important industries and constituencies.  The Chinese authorities could also threaten to dump holdings of U.S. treasuries, although this would likely be limited to extreme circumstances.

Is There a Tipping Point for Financial Markets?

Thus far, heightened trade tensions have added to market volatility, but they have not culminated in a broad sell-off of the U.S. dollar and financial assets. The risk, nonetheless, is that global investors at some point could lose confidence in the U.S., considering President Trump’s mercantilist proclivity: He views international trade as a zero sum game, in which there are winners (surplus countries) and losers (deficit countries), rather than as voluntary exchange in which both parties benefit.  The approach of the Trump administration is to focus on countries with bilateral trade imbalances and to take action when they are perceived to be too large (Figure 1).  Thus, the President recently has mentioned the need to reduce large imbalances with the European Union and Japan.

One reason the actions on steel and aluminum have garnered so much attention is the national security rationale used to boost tariffs. This is highly unusual: Trade sanctions typically have been administered when countries dump products at below market costs, in which case the U.S. government has opted to impose countervailing duties.  Yet, while there is a problem of over-capacity in steel today mainly due to subsidies of the Chinese government, the national security provision gives the President considerable latitude to take action against countries that have not violated the norms of the World Trade Organization (WTO). Consequently, countries are left to wonder what product or country will be singled out next, and which ones will be granted exemptions. Thus, while the products covered in the report drafted by the U.S. Commerce Department account for only 2% of U.S. imports, the list will likely grow over time, but there is no way of knowing the extent. For example, the President recently has singled out the trade imbalances with the EU and Japan.

For some time now, my principal worry has been that President Trump lacks an understanding of the influence that macro forces - notably the federal budget deficit and pace of economic growth - has on the trade deficit. During the Reagan years, for instance, the U.S. experienced a “twin deficit” problem in which budget deficit and the current account deficit blew out simultaneously. Until recently, I thought it would take several years for these deficits to blow out in the current context. However, in the wake of the tax and spending bills that have been passed, the federal budget deficit is now projected to nearly double and to reach 5% of GDP by next year. With the U.S. economy experiencing its best growth in more than a decade, this will translate into strong import demand and an expanded trade deficit. If so, the risk is the Trump administration will blame our trading partners for a problem that is of our own making. This is a wild card for the economy and financial markets, because the President’s actions on trade are unpredictable and he is less beholden to Congress on trade than on other policy issues. 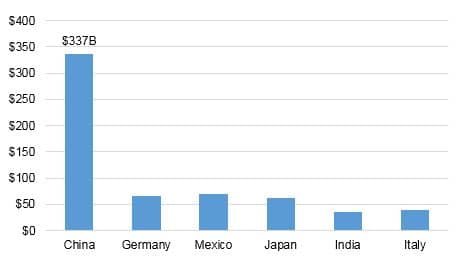