The threat of conflict between the U.S. and its trading partners has been building steadily this year as the Trump administration has shifted focus from domestic to international policies. It is currently engaged in separate negotiations with Mexico and Canada over North American Free Trade Agreement, as well as with the European Union over auto imports. Meanwhile, it has raised duties on aluminum, steel, and $50 billion of goods imported from China.

Are We Headed For a Trade War With China?

U.S. trade policy now appears headed for a showdown with China, as the administration is set to announce duties on an additional $200 billion of Chinese imports. This would lift the tally to one-half of Chinese imports. Moreover, President Trump has stated duties could be extended “on short notice” to cover all Chinese imports if the government does not comply with U.S. demands to open its markets.

Thus far, the escalation in trade tensions has not had a visible impact on the U.S. economy. Indeed, economic growth accelerated to a 4% rate in the second quarter, jobs growth is strong and corporate profits have surged by more than 20% this year partly as a result of corporate tax cuts. Consequently, the U.S. stock market has gone on to set a new record high after a 10% correction in February-March. The reason: Many investors dismiss the threat of a trade war, believing the Trump administration is merely trying to extract concessions from trading partners.

But this begs the question: How long will markets stay calm if trade tensions continue to escalate and take a toll on the global economy?

Cracks already are surfacing outside the U.S. Since February, China’s stock market has sold off by more than 20% in U.S. dollar terms, including an 8% depreciation of the yuan against the dollar. The Chinese government has responded by easing monetary and fiscal policies to counter an expected slowdown of the economy. However, these actions will also add to the country’s already high debt burden.

At the same time, emerging economies that are reliant on foreign capital are feeling the impact of higher U.S. interest rates and a stronger dollar on their external debt, and some are experiencing capital flight. This has resulted in the MSCI Emerging Market index falling into bear territory recently when steep declines for many emerging market currencies are included.

President Trump is confident the U.S. can win a trade war because the U.S. imports far more from China than China does from the U.S. Some within the administration may also believe now is a good time to raise tariffs because of the vulnerability China and other economies are feeling.

However, there are several fallacies with this reasoning. First, China (and other U.S. trading partners) are determined not to cave into demands that are unacceptable to them. I witnessed this first hand at a conference in Shanghai in May, where the over-riding issue debated was the impact U.S. actions would have on China’s future. One attendee asked, “Why is the U.S. government seeking to halt China’s emergence in the realm of technology?” The bottom line is China’s government will retaliate against actions that harm its economy, and it believes it has greater staying power than the U.S.

Second, the argument ignores important second-round effects as U.S. tariffs take their toll on foreign economies. The mistake is failing to understand that the U.S. and global growth are inter-twined: Global growth is strongest when world trade volumes are rising, as was the case last year, and it is weakest when trade volumes are shrinking as during the Global Financial Crisis (chart below). International trade is a proven way to grow the world economy rather than a zero-sum game. In this context weakness abroad is a risk, not an advantage, for the U.S. 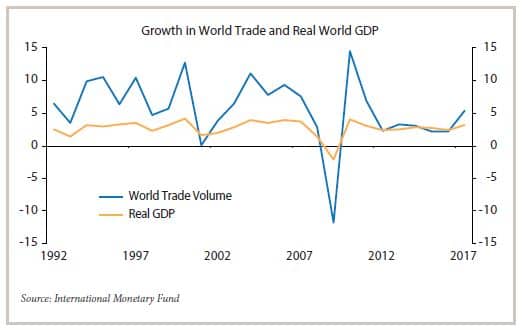 A third error is a failure to understand how a widening disparity in growth between the U.S. and abroad is likely to increase the overall U.S. trade imbalance. The U.S. trade deficit typically widens during periods of strong growth because the domestic economy has a high import content (about 25% of consumer goods) and is less export-oriented. Stronger U.S. growth has also been associated with an appreciating dollar, as foreign capital is attracted to the U.S. by higher interest rates than abroad. The bottom line is that any initial advantage the U.S. may reap from imposing duties on foreign goods is likely to be countered both by higher duties levied on U.S. goods and by a weakening of foreign currencies versus the dollar.

Finally, this poses yet another question: What will President Trump do if the overall U.S. trade imbalance widens in 2019 and 2020? (It already has increased by 7% in the first seven months of this year.)

My concern is the Trump administration is apt to blame our trading partners for depreciating their currencies when the outcome is largely being determined by policies in the United States. This could lead to yet another round of escalation of trade tensions that would undermine investor confidence and increase the risk of financial market turbulence. For these reasons, I am more worried about a trade conflict than many investors today.