Meet Our Family of Companies
Our site uses cookies to improve your visitor experience. By browsing our website, you agree to the use of cookies and agree to our privacy policy.
Even though we see the economic outlook as generally favorable after a strong stock market run and re-opening activity, we recognize that market volatility may increase, and some investors may be turning cautious—due to a variety of risk factors.
By Nick Sargen October 13, 2021
Economics Markets
Share:

The U.S. stock market has had a phenomenal run as the economy and businesses have recovered from the coronavirus pandemic. However, investors may be turning cautious due to several risk factors:

Amid this, we are maintaining a moderate overweight of risk assets in portfolios as the economic outlook is generally favorable, but we are cognizant that market volatility could increase.

It has now been 18 months since the federal government and the Federal Reserve embarked on programs to stabilize the economy and markets as the COVID-19 pandemic forced businesses and schools to be shuttered. These programs and the reopening of businesses have far exceeded expectations: Economic activity is now above levels before the pandemic hit, and the S&P 500 Index has generated a return of more than 75% from the end of March 2020. Moreover, returns for small cap stocks and the NASDAQ are even higher (see Figure 1).

Source: Bloomberg. For informational purposes only. Frank Russell Company (FRC) is the source and owner of the Russell Index data contained or reflected in this material and all trademarks and copyrights related thereto. The presentation may contain confidential information pertaining to FRC and unauthorized use, disclosure, copying, dissemination, or redistribution is strictly prohibited. This is a Fort Washington Investment Advisors, Inc. presentation of the Russell Index data. Frank Russell Company is not responsible for the formatting or configuration of this material or for any inaccuracy in Fort Washington’s presentation thereof.

U.S. equity markets have generated impressive results so far this year, with the S&P 500 index returning 15.9%. The stock market posted seven consecutive months of gains before softening in September. By comparison, bond market returns this year have been flat for investment-grade corporates, and high yield bonds and are negative for Treasuries as yields have increased this year.

Looking ahead, equity investors may be turning cautious for the next six months. For example, the latest American Association of Individual Investors (AAII) investment survey fell to the lowest level of bullish sentiment since July 2020 and more than one third of the respondents expected declines.1 Accordingly, we provide our assessment of how several key factors could influence investment returns.

How Will the Delta Variant Weigh on the Economy?

A key development in the past quarter was the unexpected surge in COVID-19 cases, hospitalizations and deaths linked to the Delta variant. Optimism that the pandemic was under control was high on the Fourth of July, when President Biden declared the U.S. is “closer than ever to declaring independence from the virus.” Since then, cases spiked to their highest levels since the beginning of this year, although they have receded recently.

Thus far, the main impact has been a dampening in consumer and business confidence and softer activity in areas such as travel and leisure, entertainment and dining. However, the overall pace of economic activity has held up as most businesses and schools remain open. If the spread is contained, the impact on economic growth will likely be temporary.

One difference from previous outbreaks is the U.S. government is not responding by enacting additional relief programs. In fact, the government has allowed unemployment benefits that were extended and elevated to lapse in September. The reason is the jobs market has continued to improve steadily with the unemployment rate dropping to 4.8%. Also, the Job Opening and Labor Turnover Survey (JOLTS) for July showed a large gap of 3.4 million people between the number of job openings posted and those that were filled (see Figure 2.)

Another impact is President Biden’s approval rating has slipped due to the outbreak as well as to criticism over the way American forces were withdrawn from Afghanistan. With Democrats controlling both houses of Congress by the narrowest of margins, it remains to be seen whether Biden’s ambitious program of a $1 trillion infrastructure bill and a $3.5 trillion reconciliation bill to address social issues and climate change will be enacted. The outcome is still in doubt and may not be known until later this year.

What is clear is the COVID-19 pandemic has fundamentally changed how the U.S. labor market functions and how Fed policy operates.2 Before the pandemic, the Fed acted pre-emptively to ensure that inflation stayed at or near the Fed’s annual 2% target. Now, the Fed is being proactive about ensuring that the economy attains full employment while allowing inflation to overshoot temporarily.

This commitment was reinforced by Fed Chair Jerome Powell at the Jackson Hole convocation in August. He acknowledged that significant progress had been made on the jobs front for the Fed to consider tapering its purchases of Treasuries and mortgage backed securities later this year. At the same time, Powell emphasized that the bar for raising interest rates was considerably higher—namely, it had to be confident the economy is operating close to full employment.

Meanwhile, the Fed’s preferred measure of inflation—the core PCE index—has surged to 3.5% recently and other measures show higher rates of inflation. Powell contends it is mainly due to factors linked to global supply shortages that are temporary. However, he recently conceded that shortages could persist into next year and keep inflation higher than the Fed initially envisaged.

The problem the Fed faces is that the longer inflation stays elevated, the greater is the risk that inflation expectations could become entrenched. This appears to be happening among consumers, where recent surveys show a significant rise in their expectations. By comparison, bond investors have sided with the Fed, and inflation expectations as measured by the spread between Treasury yields and those for Treasury Inflation Protected (TIP) bonds, have not increased materially (Figure 3). 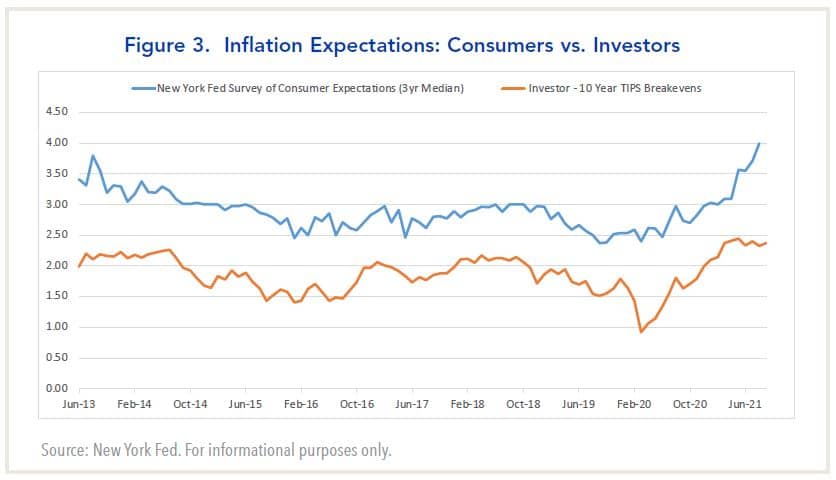 Amid this, two factors could tip the balance. One is wage increases could continue to rise as the labor market tightens. The other is the housing component of the CPI index (consisting of the cost of rent and owner equivalent rent), which accounts for one third of the index, could increase further as home prices soar.

The bond market currently is pricing in Fed rate hikes to begin in the second half of 2022. However, yields have increased recently, and they could spike if investors become concerned about inflation.

Is China a Global Risk?

The main risk globally is within China. During the past quarter world markets were buffeted by two major developments.

One is the government’s clampdown on leading technology companies and businesses that has been underway for a year now. Foreign investors seemed oblivious to what was happening until July, when several leading technology companies lost about 20% of their market capitalization. Thereafter, the sell-off steepened when the government took strong actions to restrain the country’s booming after-school tutoring industry.

In the wake of these developments, commentators on China have split into two camps.3 The benign view is the recent regulatory clampdown is not unusual and the tech giants, which have a history of adapting to new regulatory regimes, will be able to cope with the latest set of rules. A more ominous view is that it could signal the end of the country’s economic miracle. Our own take is that it is premature to form a strong view now, as developments are likely to play out for several years.

The more pressing issue is a potential default of Evergrande, the country’s largest property developer. The company has $300 billion in debt outstanding, and China’s property market has weakened as a result of measures the Chinese launched a year ago to curb lending by property developers that contributed to a 21% decline in home sales in August over a year ago.

Some commentators have raised the specter that an Evergrande default could be a “Lehman moment” for China.  However, a selloff of China’s property market would not likely play out as the U.S. housing market bust in 2007-2009, because China’s financial system is subject to extensive government control and bank loans to China’s property developers are not marketable instruments, and the workout process will take a long time.

Nonetheless, a broad-based selloff of China’s property market would have major repercussions for China’s economy. The reason: Property represented two thirds of China’s household assets in 2019 compared with about one quarter for U.S households. Moreover, the latest estimate for China is higher today at 78% owing to rapid price appreciation in the past two years.

The main reason for believing the fallout will not spread beyond China is that foreign investor involvement in China’s property market and financial system is small. That said, given the prominence of China’s economy in the global economy and international trade, a slowdown would have spill-over effects to China’s main trading partners in Asia, Europe and North America.


Investment Conclusion: A Time for Caution

Weighing these considerations, we are maintaining a moderate overweight of equities and other risk assets in balanced portfolios, because we believe the economic outlook remains favorable, and the Fed is on hold. However, we have pared some positions, considering that risk assets appear fully valued while risks have increased, and we are monitoring these risks very closely.

2021 Midyear Outlook: Recovery's on Track but Is Inflation?

Why Well-Qualified Buyers are Having Trouble Securing Mortgages

Why Unemployment Data is Challenging the Fed

U.S. Stock Market Capitalization at 2X GDP: How Ominous Is It?

The Fed Needs to Articulate Its Framework on Inflation

Lessons from the Collapse of Bretton Woods

Is U.S. Housing Headed for Another Bust?