Meet Our Family of Companies
Our site uses cookies to improve your visitor experience. By browsing our website, you agree to the use of cookies and agree to our privacy policy.
Most observers expect at least a temporary surge in inflation as the economy reopens from the COVID-19 pandemic, but there is greater uncertainty about the outlook beyond this year.
By Nick Sargen June 18, 2021
Economics Markets
Share:

This issue has become relevant for investors amid the current debate about U.S. inflation. Most observers expect at least a temporary surge in inflation as the economy reopens from the COVID-19 pandemic, but there is greater uncertainty about the outlook beyond this year. The 0.7% jump in May core CPI adds to the debate, as it lifted the year-over-year rate to 3.8%, the highest since 1992.

Federal Reserve officials believe inflation expectations are well anchored at around 2%. The crux of this view is that core inflation has not exceeded 3% per annum in the past three decades and most of the recent rise reflects base effects from a year ago when prices were depressed. However, several recent measures of inflation expectations including the spread between Treasury yields and TIPS (Treasury Inflation Protected Securities) signal they are beginning to increase (see chart). 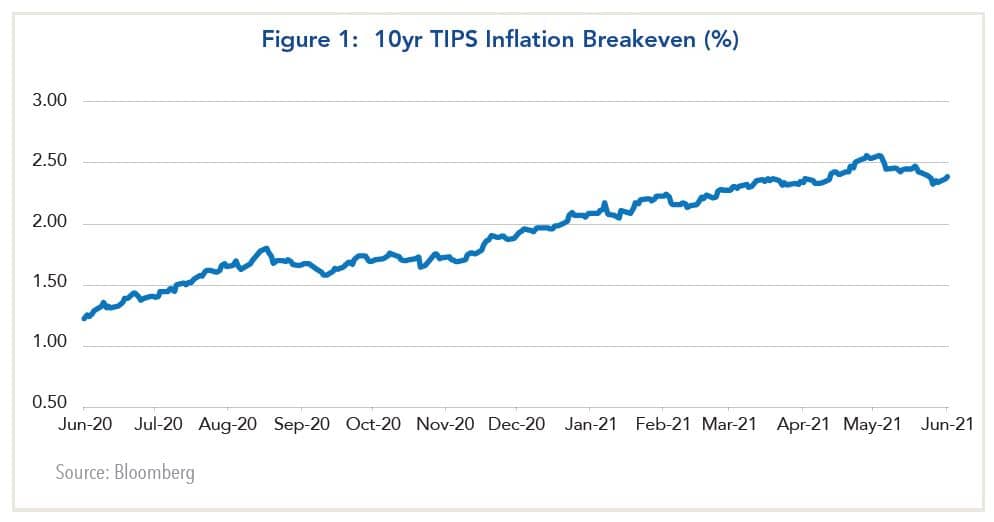 In these circumstances, investors need to consider how assets such as equities and real estate that have high valuations would fare if inflation were to rise.

In theory, stocks should provide a hedge against inflation if a company’s revenues and profits grew at the same rate as overall inflation. In practice, however, inflation is rarely neutral, and the impact on equities typically is negative when it is unexpected. Steven A. Sharpe of the Federal Reserve conducted a comprehensive study in 2000 that concludes: “market expectations of real earnings growth, particularly long-term growth, are negatively related to expected inflation…inflation also increases the required long-run return on stocks.”

In my book Global Shocks, I divide the past five decades into two periods: “High Inflation” covering the period from the late 1960s through the late 1980s, and “Low Inflation” that has been the norm in the past three decades. The book illustrates how central banks can contribute to the formation of asset bubbles, as well as undermine them.

One of the principal findings is that asset bubbles rarely occur when inflation is high. The reason: Central banks often boost interest rates in real terms to contain inflation, which limits increases in asset prices and may cause them to burst.

By comparison, asset bubbles have become more prevalent since the late 1980s, as evinced by Japan’s equity and real estate bubble, the Asian Financial Crisis and the tech bubble. They were followed in the ensuing decade by the U.S. housing bubble and Global Financial Crisis. These asset bubbles occurred as central banks kept interest rates low and ignored rapid increases in credit that boosted asset values to unsustainable levels.

So, where are we today? My take is that the U.S. stock market appears expensive as measured by traditional yardsticks such as the one-year forward P/E multiple or the cyclically-adjusted P/E (CAPE) ratio. However, the equity risk premium is close to fair value, indicating stocks are reasonably valued compared to bond yields. In this respect, it is not clear cut that the stock market is a bubble now.

The main factor supporting the stock market is strong earnings growth as the economy experiences its most powerful recovery since 1984. During the first quarter, profit growth for S&P 500 companies was nearly double what was expected at the beginning of this year. Accordingly, some Wall Street firms are now calling for earnings to increase by more than 30% this year. Thereafter, profit growth is expected to moderate next year as the pace of economic growth normalizes.

The main risk is that unprecedented government stimulus could cause the economy to overheat at some point. For example, federal programs to combat the COVID-19 pandemic are more than five times larger than what was enacted in response to the 2008 Global Financial Crisis.

On top of this, the Biden administration has unveiled its 2022 budget. It calls for about $4.5 trillion in federal spending that would be offset by $3.5 trillion in tax increases over the next decade. If enacted, it would raise spending as a share of GDP to an average of 24.5% over the next decade, well above the 50-year average of about 20.5%, and the highest in U.S. peacetime history.

Even with favorable economic assumptions, the Biden administration acknowledges that deficits would average just over 5% of GDP in the coming decade, for a cumulative increase of $14.5 trillion. This would boost the ratio of publicly-held government debt to GDP to 113%, well above the peak of 107% following World War II.

Given this prospect, the Federal Reserve’s response will be critical in determining whether inflation and inflation expectations are contained. While the Fed has earned credibility as an inflation fighter over the past three decades, the way it sets monetary policy has changed in the past year. It now targets average annual inflation of 2% over multiple years, and it has indicated that it will not tighten policy as long as unemployment is elevated.

The main concern is that the Fed could wait too long to act and inflation expectations could prove difficult to reverse. Steve Roach, who worked at the Federal Reserve in the early 1970s, claims it lacked a macro framework for understanding inflation and treated price increases as aberrations until inflation was embedded in the system.

One difference from the 1970s is the Federal Reserve may be reluctant to tighten policy now for fear of bursting the stock market and real estate market. Whereas the Fed previously had the luxury of inflation expectations being anchored at 2%, that could change if inflation climbs to 3%-4% in the next few years. Thus, while the Fed has the requisite tools to combat inflation, officials may not be willingly to deploy them in time.