Meet Our Family of Companies
Our site uses cookies to improve your visitor experience. By browsing our website, you agree to the use of cookies and agree to our privacy policy.
During this quarter, the stock market's gains for the year have been erased amid perceptions U.S. growth has peaked.
Nick Sargen December 14, 2018
Markets
Share:

Anticipating a 2019 Slowdown, Not a Recession

Following Donald Trump’s surprise election, the U.S. stock market surged as investors anticipated his pro-business policies would boost economic growth and corporate profits. The main economic issue debated then was whether corporate tax cuts and reduced government regulations would restore growth to its former 3%+ trend rate, as the administration contended. Until recently many investors believed this was feasible, as growth accelerated during 2017 and averaged 3.8% in the past two quarters.

More recently, investors have questioned how long growth can stay elevated, especially if interest rates rise further and overseas economies slow.  This reassessment has occurred even as the U.S. economy continues to perform well, with growth in the current quarter expected to be in the vicinity of 3%.  One reason is that interest-sensitive sectors such as housing and autos, which typically lead the economic cycle, have softened, and companies with heavy debt loads are feeling the impact, as well. As Neil Irwin observes, “After years in which the economy has become titled towards industries that depend on low interest rates, a potentially painful rebalancing is underway.”1

In addition, some observers are nervous that a flat yield curve (Figure 2) could signal a slump next year, considering recessions typically are preceded by an inverted curve. However, we believe this risk is low.  Normally, recessions occur when the economy overheats and the Fed tightens to lessen inflation risks, or when there is a credit crunch, but neither of these conditions is evident today. Moreover, consumer spending, which accounts for 70% of overall spending, has been robust, and is likely to remain so, as confidence is high, jobs are plentiful and discretionary income is rising at a solid clip. 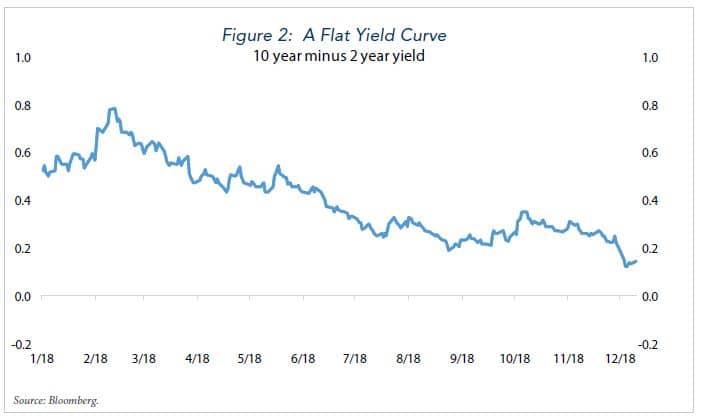 One disappointment is the impact of corporate tax cuts on business investment spending has not lived up to optimistic expectations, as companies have mainly used their tax savings to buy back company shares. While business investment accelerated in 2017, it mainly reflected a recovery in the energy sector, and overall capex spending softened in the past quarter along with energy prices. Moreover, the impact of tax cuts on the economy is expected to fade next year, and will likely result in slower profit growth. Wall Street analysts have been calling for it to slow to the low double digits, but investors are behaving as if it may only be in the mid-single digits.

The biggest concern among investors now is the outcome of the U.S - China trade conflict. While there has not been a discernible effect on the U.S. economy thus far, China and emerging economies are feeling the impact of tariffs. Europe’s economies also appear to be influenced by uncertainty about trade, and the four largest economies now face significant political challenges, as well. Whereas the strong U.S. stock market showing in 2017 mirrored an upturn of the global economy, the pattern this year is that U.S. growth accelerated while growth abroad decelerated.  Investors are now wondering how long this dichotomy can persist.

The Fed Is Likely to Pause Next Year

One risk that has lessened is the possibility the Federal Reserve could tighten policy too aggressively. The market sell-off this quarter was sparked by Jerome Powell’s comments on October 3 that the outlook for the economy was “extraordinary” and interest rates were a long way from the neutral zone. Powell’s message created an impression among market participants that the Fed was on automatic pilot, and it would continue raising interest rates on a quarterly basis into 2019.

Since then, Chairman Powell and Vice Chairman Richard Clarida have sought to assuage markets. They have indicated the Fed is not on automatic pilot and that any moves it makes will be data dependent. While the Fed is still likely to raise the funds rate to 2.25%-2.50% at this month’s FOMC meeting, the bond market is now pricing in only one further increase next year with a 50% probability of a second move.

Amid this, there is an ongoing debate within the Fed about what level constitutes the “neutral rate” for the U.S. economy. It is defined as the level of interest rates beyond which monetary policy goes from being “accommodative” to being “restrictive.” Although there is no precise number that can be observed, the estimates of Fed policymakers range from 2.5% to 3.5%.

U.S. - China Trade Is the Wildcard

Our view throughout this year has been that the principal risk to the global economy and markets would be a U.S.-China trade war. Worries about a trade conflict fueled the stock market sell-off in the first quarter, as well that in the current quarter. We consider it a wildcard, because it is in both countries’ interest to resolve the dispute before lasting damage is done, but it is also difficult to reach agreement for each of the three key elements that lie at the core of the dispute.

From China’s perspective, the most workable solution would be for it to pledge to open its markets and buy more American goods in order to shrink the trade imbalance, while the U.S. would abstain from raising tariffs. However, two other issues — one relating to protection of intellectual property and the other to government subsidization of Chinese businesses — are more problematic. The reason: Both are key elements of China’s development strategy that has transformed the country from a backward nation into a superpower, and the Chinese authorities therefore are not about to cave easily even if the economy softens.

Following the G-20 meeting in Argentina this month, investors were hopeful a truce had been reached when President Trump agreed to hold off raising tariffs on Chinese imports while negotiations would be undertaken for a 90-day period. These hopes were then dashed when President Trump stated that he would reinstate the duties if no substantive agreement was reached. This was followed by the arrest of a prominent Chinese executive form Huawei in Canada for extradition to the U.S. to face criminal charges for violating U.S. sanctions on Iran.

Assuming this incident is resolved, a major test lies ahead next year when the overall U.S. trade deficit is set to continue widening. During the first ten months of this year the deficit climbed to nearly $730 billion, a 10% increase over the same period in 2017, and the trade gap is likely to increase further in 2019, as buoyant consumer spending and a strong dollar pull in imports. Such an outcome would put President Trump in the difficult position of having to explain why the trade deficit is expanding when tariffs have been imposed on half-to-all of goods imported from China, as well as on items such as steel and aluminum.  He will face the choice then of either finding a solution to the trade war he can live with, or declaring China to be a currency manipulator and thereby escalating the war. It is unclear now which route the President will take.

Meanwhile, market volatility is likely to stay high as long as the various issues relating to U.S. and overseas growth, Fed interest rates and the U.S.-China trade dispute are unresolved. But we do not foresee a bear market, as it typically accompanies a recession or a credit crunch, and neither looms on the horizon. Our take is the most likely outcome for 2019 is one in which economic growth moderates into the 2.5%-2.7% range, corporate profits ease into single digits, and inflation and bond yields fluctuate around current levels.

We are not making changes to our investment strategy, because we believe the U.S. economy is on solid footing and there are no major imbalances that are likely to spur a recession next year. Also, the recent sell-off has made valuations for corporate stocks and bonds more attractive. Our equity strategy continues to favor high-quality stocks, as the economic cycle is unusually long. On the fixed income side, we continue to favor investment-grade bonds over treasuries.